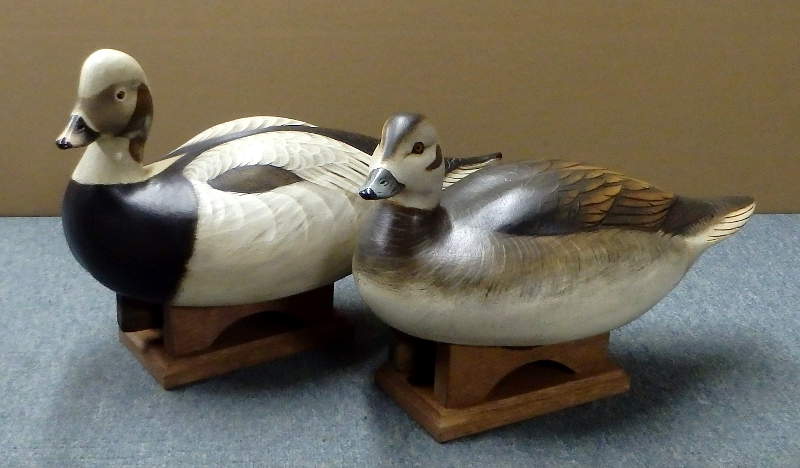 “Carvers by the Pair: Compare and Contrast”SUBMITTED PHOTO
×

“Carvers by the Pair: Compare and Contrast”SUBMITTED PHOTO

As it concludes its 30th anniversary year, D&R Greenway invites the public to enjoy stunning artistry in six duck species, by seven world-class decoy carvers, in its newest array from the Jay Vawter collection.

This exhibit is particularly timely. The Cornell Ornithology Lab releases its study revealing the planet’s loss of 2.9 billion breeding birds since 1970.

The land trust’s connection of rarities was donated to the Land Trust in 2012.

“Carvers by the Pair” also displays the donor’s recent loan of a spectacularly painted “old squaw” drake and hen, by Jim Schmiedlin. [This species’ name has since been changed to ‘long-tailed ducks’.] Selected for this array are northern pintails, cinnamon teal, harlequins, gadwalls and Canada geese.

Many of these decoys have earned ribbons in national and international competitions.

Vawter has been collecting for around 40 years, mostly through the highly respected dealer, Ron Kobli of Frenchtown.

Jay Vawter revealed that the reason for his remarkable gift. “Some years ago, I pushed to recover from knee surgery by walking the hills of Greenway Meadows Park,” [surrounding D&R Greenway Land Trust].  It matters to the donor that “D&R Greenway preserves teem with these birds. Seeing decoys of regional birds raises awareness about the urgency of conservation in our time. Healthy land means healthy water.”

Carver Bob White of Tullytown, Pa, explaind that most of his work is Delaware-River-and-Bay-centric. Competitions specify very precisely that these regional carvings must be comprised of three species, made of cedar, hollow, with glass eyes and oil-painted. River decoys tend to be narrower and longer, due to currents. Coastal birds tend to be shorter and stockier. White, who could be called “the last of the Delaware River carvers,” describes Kobli as the number one decoy dealer in the country. White is not the only decoy master who began carving as a boy: at 81, he is still carving. His favorites are, “anything that flies.” Speaking of predecessors in his field, “The early ones were folk artists and didn’t know it.”

Pat Godin, 17-time world champion, is described in journals as “a master of the art form. He replicates amazing avian subjects in their natural setting.” What intrigues this artist is “carving a piece of dead wood, giving it a chance to live again… a special form of reincarnation.” His rig of three Atlantic brant in a recent competition were named “2nd in the world”. Godin is one of the stars of natural gestures. His birds are described as: “very realistic; quintessentially lifelike.” The Ward Foundation of Maryland has presented Godin their coveted title of “Living Legend.” Godin’s motive is “my passion for the birds. It’s never boring. I give it the best of everything I can. You could say I am honoring them.” Critics dare to insist that a Pat Godin decoy is “better than the real.” What surprises him about the art of decoy carving is that he and his colleagues “take a hard piece of wood and make it seem soft.”

Emeritus professor of ecological sciences at Rutgers and stellar ornithologist, Charles Leck, Ph.D., reminded us that decoys have ‘migrated’ “from hunters’ tools to fine art and well beyond. And this collection is incredibly accurate.”

When is a decoy more than a decoy? When it’s an artifact, a rarity, a collectors’ item – some of which are bringing in $600,000 at auctions. When it’s a carved, painted repository of a way of life – both oceanic and riverine. There’s magic on the Library shelves of D&R Greenway Land Trust right now. The public is welcomed.

D&R Greenway preserves and cares for land, inspiring and expanding a conservation ethic, now and for the future. Its current and ever-increasing emphasis is upon healing trails. D&R Greenway’s preservation achieved 20,865 acres, involving 308 properties.  609-924-4646   www.drgreenway.org.

Local organizations frequently rent the galleries of the Johnson Education Center. Robert Wood Johnson had this circa-1900 barn constructed, to provide food for his family while they lived at Morven. Through its indoor and outdoor programs, art exhibits and related lectures, as well as use by regional groups involved in education and preservation, D&R Greenway strengthens the public’s commitment to safeguarding New Jersey land.