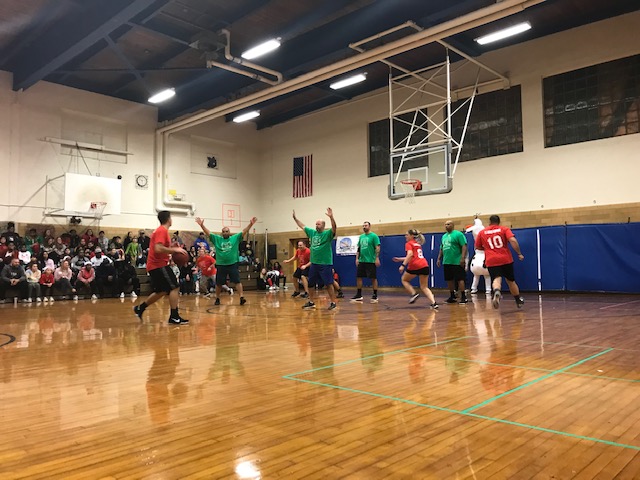 The Florence School District and Police Department hosted an annual “Hoops for the Holidays” charity basketball game on Dec. 17 at the Riverfront Middle School gymnasium as they worked together several weeks before Christmas to help locals in need. Submitted Photo
×

The Florence School District and Police Department hosted an annual “Hoops for the Holidays” charity basketball game on Dec. 17 at the Riverfront Middle School gymnasium as they worked together several weeks before Christmas to help locals in need. Submitted Photo

Now in its 10th annual year, the Florence school community and police were the hosts to the “Hoops for the Holidays” charity basketball event on Dec. 17 in the Riverfront Middle School gymnasium. They worked together several weeks before Christmas to help locals in need.

Participating members from the school district and police department squared off on the basketball court to raise money and collect donations of food and toys for locals in need.

Officials said that this year’s event raised $3,500, while the game collected food and toys for 87 local families.

With the annual game having reached a decade-long run this year, Florence Township Police Department Corporal and School Resource Officer Jason Shafer said the joint effort event serves an important purpose in the community alongside the joy it brings to local attendees.

District officials said the money raised this year was a record-high total in the annual event’s history.

Shafer also explained that the donations received this year will help officials purchase gifts and meals for the local families in need.

“We wanted to have an event around Christmas time to bring the community together to raise money for the less fortunate families in town,” Shafer said. “All the funds we raise leading up to and during the games all go to, in turn, back to families in need in town.”

The game comes off the heels of what was another successful turnout last year when it raised a reported amount of $1,400, along with donations of food and toys. The friendly matchup between township officers and members of the school district helped keep the holiday tradition a continuous success this year.

Although the annual game featured two teams comprised of the Florence district staff against members of the police department, this year’s game changed a bit with both teams having members of the Riverfront Middle School basketball team.

The middle school team split up half its squad to the district and police department sides to get the school community more involved.

This year’s game also featured guest appearances from the Grinch, Santa, Olaf and the Florence Flash school mascot. At halftime, the Grinch and the Flash even participated in a dance-off competition.

Face painting, concessions, a performance by the Florence Township Memorial High School and Florence Cheerleaders & Dance Club, and an announcement of the winter sports teams and spirit week winner were also featured at the event.

With culmination of these community resources and residents coming together to support locals in need this holiday season, Shafer pointed out that the fun and joy the game brings can hopefully extend to the greater purpose it serves to support local families.

“It’s an event that’s very low in cost, but is a great way for everyone to come out together,” he said. “It’s a way to bring the whole township together to raise money for those families less fortunate, so they can have a great holiday as well.”