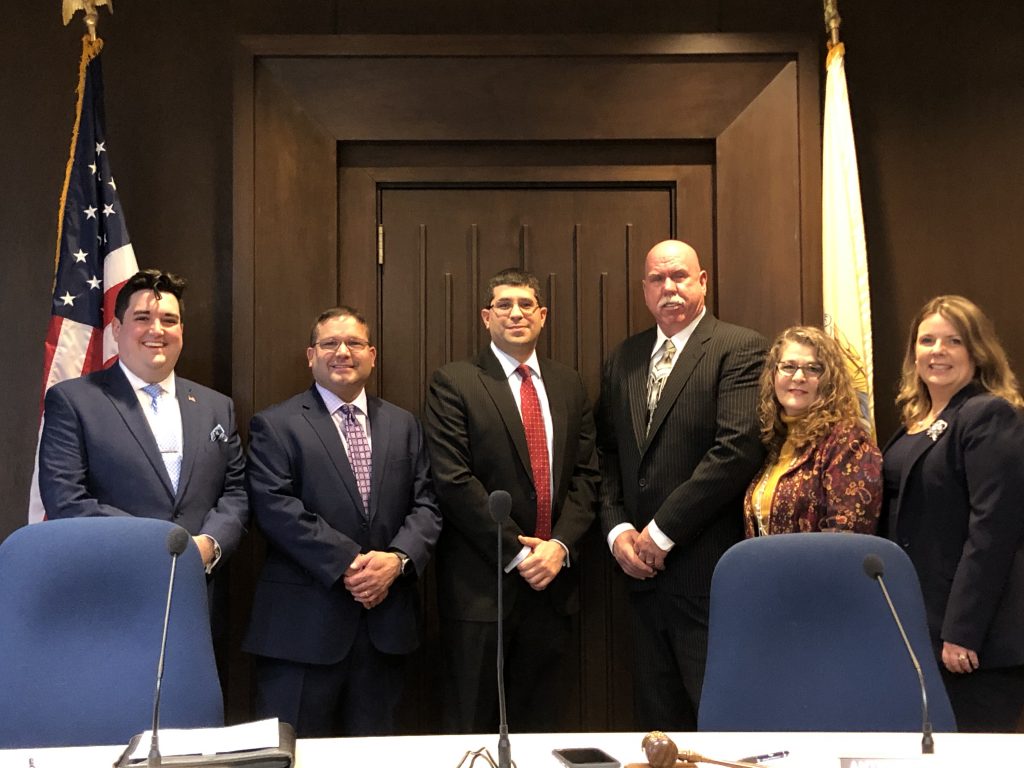 Regan and Olsavsky were elected to their first terms on council in the Nov. 5 election. They joined the council immediately to succeed individuals who had been appointed to the governing body.

During Eatontown’s annual reorganization meeting on Jan. 1, Gonzalez took the oath of office and began serving a three-year term. Borough Clerk Julie Martin administered the oath of office to Gonzalez, who was surrounded by family members.

Olsavsky and Regan, who joined the council in November, were administered the oath of office once again so their family members could experience the commemorative moment with them.

After taking their seats on the dais, Gonzalez and Escalante participated in their first roll call vote and helped to appoint Corcoran to fill an existing vacancy on the governing body. Corcoran will serve a one-year unexpired term.

Following that vote, Gonzalez was sworn in as council president for 2020.

In his remarks, Talerico said, “Before we look ahead, let’s look back on 2019 and what a year it was. I would like to thank former council members Lisa Murphy, Gregory Loxton, Tanya Rivera, Christine Caruso, Edwin Palenzuela and Jennifer Sherrod, as well as former council presidents Al Baginsky and Patti May Kelly for their service to Eatontown.

Since December 2018, five members of the council resigned and the borough attorney said he would not seek reappointment. Fighting was a common occurrence among council members and at one point the attorney publicly admonished them for disregarding his legal advice.

“As you probably know, the governing body had an enormous amount of transition in 2019. This is also true for our leadership in our administration,” Talerico told those in attendance at the municipal building.

Police Chief William P. Lucia is serving as the interim borough administrator after Cherron Rountree resigned to accept a new job in a nearby municipality.

“What a loss it was,” Talerico said of Rountree’s resignation. “Words cannot express how much I valued (Rountree). Her thoughtfulness for the staff, the way she cared about people and their personal lives, her input and the ideas she brought to town. The thought of a new administrator was scary for me.”

Talerico said he hopes to fill the administrator’s position soon, but said, “We first must address the vacancies of other key positions.”

In October 2019, Erik Brachman, who was the zoning officer, and Spencer Carpenter, who was the director of public works, resigned.

“With all that change, I’m sure you can see why 2019 was the longest four years of my life,” Talerico joked. ” … Eatontown has several challenging projects ahead and we will need to be running on full throttle in order to reach maximum potential.”

Regarding the Fort Monmouth properties, Talerico said officials are planning to move the Department of Public Works operations to Fort Monmouth.

He also said Eatontown received a grant from the Monmouth County Open Space Fund. The money will help borough officials purchase 4 aces on Fort Monmouth for parkland and recreation purposes.

Regarding massage parlors, Talerico said, “This year, council can look for new ways to make it more difficult for massage parlors to come into town from a zoning perspective. We will place rules on how far apart they need to be from each other and from schools, residential zones, etc.”

In 2019, the council adopted an ordinance which amends the regulations a business owner must comply with to operate a massage, bodywork or holistic therapy business in Eatontown.

Officials said the amended regulations would serve to ensure that only licensed services are provided at those businesses. They said the amended ordinance would further prevent possible illicit activities such as prostitution and human trafficking.

As to the sale of medical marijuana, Talerico said, “Regardless of how you feel about it, it’s better for us to be proactive about it than not.”

In 2019, a satellite location of Garden State Dispensary was approved at 59 Route 35.

Talerico previously explained that because Eatontown has no zoning in place that permits a medical marijuana facility to operate, the Garden State Dispensary location on Route 35 “fell into the zoning where retail pharmacies are allowed.”

Talerico emphasized his stance against recreational or adult use marijuana.

“I hope to use 2020 as a way to rekindle the community spirit I grew up with in Eatontown,” the mayor said, noting the borough is approaching its 350th anniversary in April.