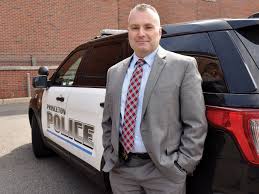 Sutter was among the thousands of individuals on site and off site who were “crushed and devastated” by the sudden death of one of Princeton’s most prominent and beloved community leaders.

“I can’t wrap my head around the fact that Rabbi Feldman is gone. He was a close personal friend, a mentor and a confidant. I am at a loss. During stressful times of personal or community tragedy and crisis, he has always been there for the entire Princeton Police Department and me. He was a conveyer of wisdom, calm, logic, perspective and a positive approach to going forward. I can’t believe that I no longer can pick up the phone and call him for guidance in how to deal with this latest tragedy – the loss of someone who played such a vital role in my life and the lives of so many,” Sutter said.

The police chief, who is Catholic, learned on Christmas Day about the death of the Jewish community leader, who died on Christmas Eve while on vacation with his entire family in celebration of family milestones.

“We never debated theology or contemplated our religious differences. We connected spiritually, ethically and professionally, in that our respective professional goals were both focused on the health and well being of the Princeton police officers and all the members the Princeton community,” said Sutter, who is six years younger than the rabbi.

Feldman, 55, was a founding member of the Princeton Police Department’s Chaplain Program, which Sutter formally established six years ago as part of the department’s police wellness initiative.

Before 2013, there were informal connections to the clergy in the churches and synagogues, but nothing structured. The goal of the Chaplain Program, as designed by Sutter, is to focus on the mental and spiritual well being of the officers, who face mental health challenges dealing with not only personal problems, but also tragedies and crises in the community at large.

“Rabbi Feldman was a fervent supporter and friend of the department and over the 15 years that he served the Princeton community as leader of the Princeton Jewish Center. He became a personal friend to me. There was not a week that went by that Rabbi Feldman did not call me or stop in the station to check on the department. His first words were always, ‘How is everybody?’ He took his position as chaplain very seriously and he had a genuine concern for the wellbeing of the department and all of its members. … He always was there for us.”

Two weeks ago, Sutter and Feldman, at the Palmer Square Hanukkah menorah lighting, talked about the growing number of violent anti-Semitic incidents; their conversation was prompted by the recent murders of members of the Orthodox Jewish community in Jersey City.

“I was most disturbed by the hate that has infected so many in our country. But the rabbi refused to let me drag him down into depression and despair. Instead he noted how the hate could have positive ramifications in that it makes for stronger partnerships and friendships. He would take terrible events and extract hope. This quality has been incredibly important to me, as someone who, like my colleagues, is often immersed in negativity – an occupational hazard,” said Sutter, who has worked in public safety in Princeton since the time he was 24.

Whenever Feldman would have to request police services, he always would ask what he could do for the department, Sutter said.

“Most recently he came to my office to ask how he could thank the entire department for the assistance we gave to the Jewish Center during the High Holy Days. I explained that it was our pleasure to help him and that his sincere thanks was more than enough. He took my words and responded by placing a thank you letter in the local papers.”

Sutter now is searching for a way to say thank you to Feldman in perpetuity.

I offered to help with any initiative he determined to be appropriate. But immediately in honor of both Feldman and Sutter, my first words of greeting to all of my daily groups – baristas, crossing guards, co-workers – will be a sincere rather than perfunctory “How is everybody?”