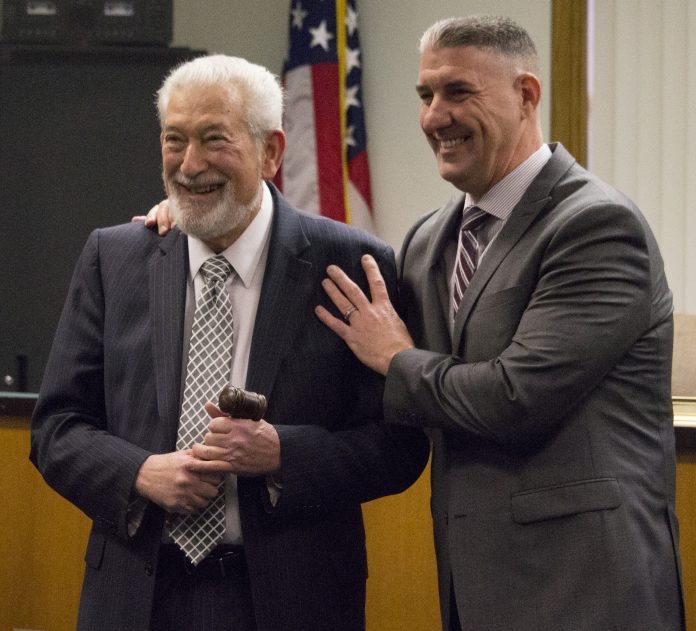 Stephen Benowitz will lead Bordentown Township as its mayor for the fourth straight year while Eric Holliday will step into the seat of deputy mayor.

During the meeting, Eugene Fuzy was appointed and sworn-in to the committee after he won his seat in November election. Fuzy ran unopposed.

Committeeman Eric Holliday was appointed deputy mayor with a unanimous vote from the committee.

The morning’s processions kicked off with an invocation led by Deacon Thomas Shea of Mary Mother of the Church Parish in Bordentown City.

Fuzy was the first committee member to be sworn in during the ceremonies by Assemblyman Herb Conaway (D-Burlington) for a new three-year term set to expire in 2022.

A nomination and election for township mayor was then held as Holliday nominated Benowitz for the seat.

The township committee unanimously voted for Benowitz as mayor. Following the vote, Benowitz was sworn in by State Sen. Troy Singleton (D-Burlington). A passing of the gavel ceremony was also held among the committee members to symbolically appoint Benowitz to the mayoral seat.

Following Benowitz’s swear-in, Holliday was nominated by Fuzy for the seat of deputy mayor, which was previously held by Fuzy. Holliday was unanimously voted in by the committee for the seat and was later sworn in by U.S. Rep. Andy Kim (D-Burlington, Ocean).

After the municipal officials were sworn in to their respective positions, the committee approved appointments for the position of township attorney, assignment of department liaison responsibilities for 2020, appointment of members to the environmental commission and the township planning board.

At the end of the meeting, each of the township committee members provided statements to the public to share their goals for 2020 on behalf of the municipality.

During his address to the public, Fuzy explained his background in serving the municipality as well as some of his successes on the committee.

“This town appointed me to the Environmental Commission where I served as vice-chair for two years. I was then asked to run for local office and eventually did,” Fuzy said. “I have served as the appointed deputy mayor for the last three years. This became my new mental outlet. During my term, I have led the change in the distribution of information to [residents] – a new website, e-newsletter ‘The Banner,’ improved Facebook, Instagram and Twitter feeds. It is this team that allowed me to do that and I am thankful for their support.

“During my first term, I made sure I gave back to the community that gave me a mental outlet and an enjoyable position at the table. I have given back by working with our local schools and scouts – girls and boys – as well as other local groups by talking about science and how local government works. I have also coordinated with local groups to help them get volunteer hours. It has been my pleasure to engage our children and look forward to continuing this. This year I will be working with the United States Census Bureau to make sure our town is counted correctly. This will ensure we get the right amount of federal aid and representation in the federal government,” Fuzy added.

As the newly elected deputy mayor, Holliday focused his address to the meeting attendees on the topic of the committee and township working together as one and progressing as a community.

“I’m very honored to be deputy mayor this year,” Holliday said. “But whether it’s mayor, deputy mayor or committeeperson, we are all here for the same calls. If anyone has known me for 25 years in law enforcement as a sergeant, titles mean absolutely nothing to me. It’s about the strength of this community and moving forward. That is what’s important.”

Meanwhile, Benowitz used his public address to highlight some of what he considered successes for the township in 2019 such as the municipality’s road program with paving, stormwater improvements and pedestrian safety measures, welcoming of new businesses, parks and recreations upgrades, social media outreach, affordable housing developments, and other topics.

Following the mayor’s highlights from 2019, as well as his goals for the upcoming year, he noted that municipality’s success will hinge on the community working together.

“You hear me use the word ‘we’ many times during my comments. ‘We’ refers to the hardworking, team spirit of our government as we indulgently make sure we work together to make our residents quality of life the best that it can be,” Benowitz said.

Rutgers Board of Governors approves tuition and fee increase