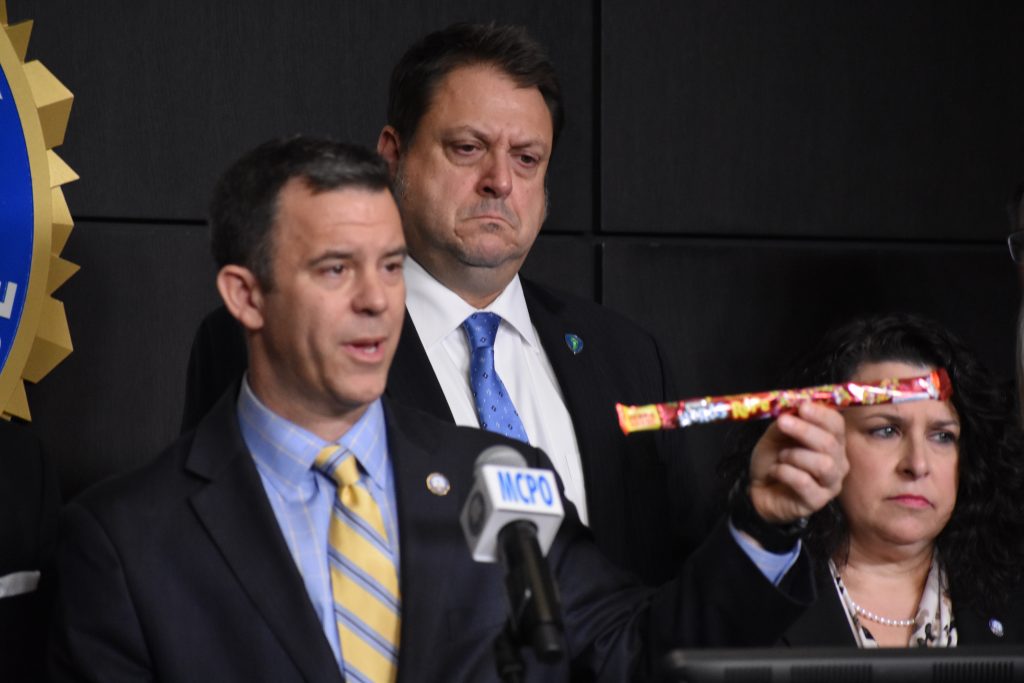 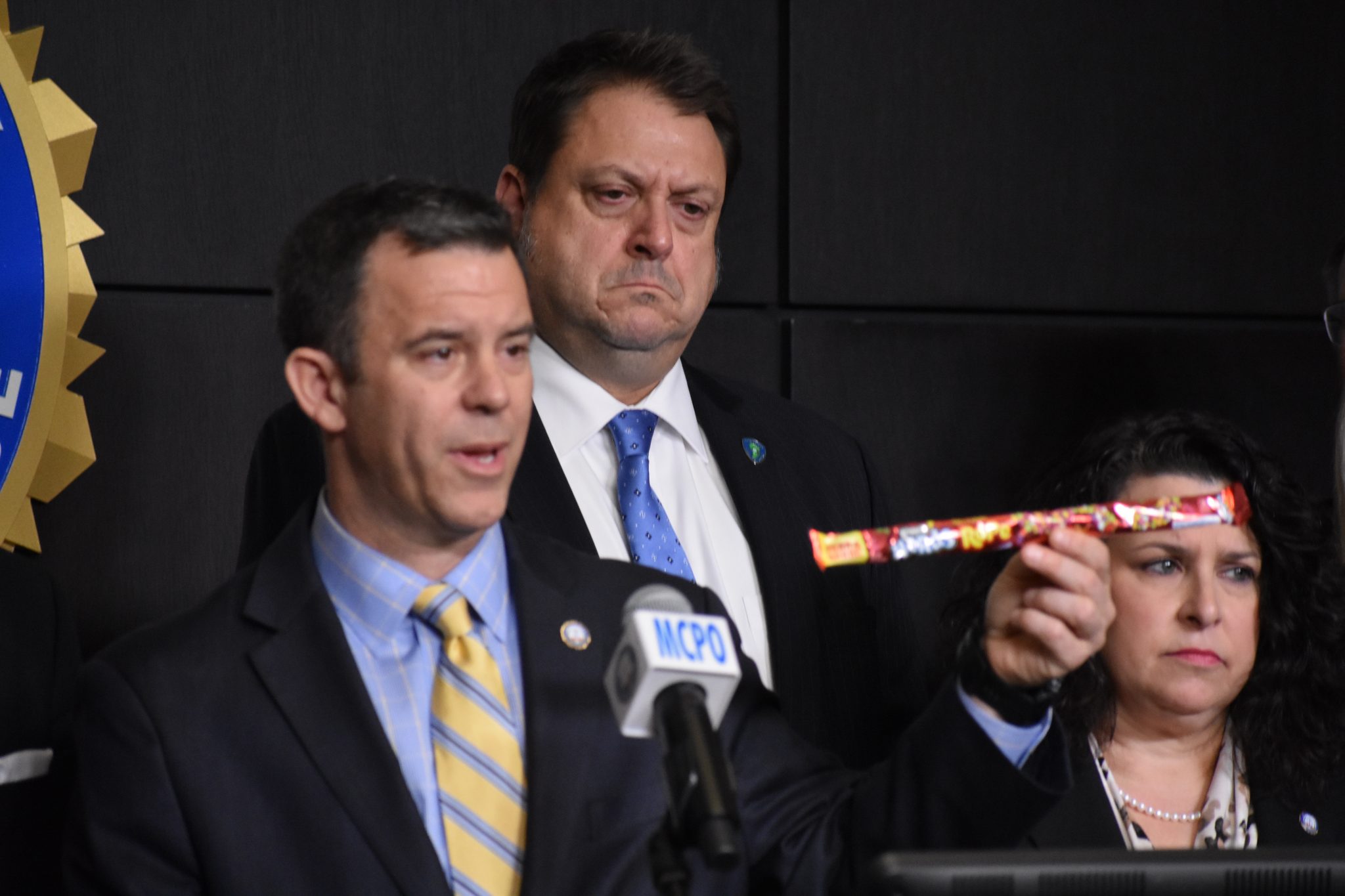 The illicit resale of popular candies laced with Tetrahydrocannabinol (THC) was leaving its purchasers with more than just a sugar high, according to Monmouth County Prosecutor Christopher J. Gramiccioni.

THC is the principal psychoactive component of marijuana.

During a Jan. 7 press conference at the Monmouth County Prosecutor’s Office in Freehold Township, Gramiccioni said an investigation dubbed “Operation On The Ropes” had uncovered an illegal business where candy such as Sour Patch Kids and Nerds Ropes were being converted into an illegal THC-infused product.

Gramiccioni said the business’s operators would purchase candy, lay the candy on trays, spray the candy with THC and let the product dry before repackaging the product for sale. He said the schemers would “purchase thousands of boxes of candy from wholesalers and transport them to processing facilities throughout Monmouth County.”

The prosecutor said the illegal product was distributed throughout New Jersey.

“Operation On The Ropes” culminated with the execution of more than one dozen search warrants in Monmouth, Ocean and Bergen counties, Gramiccioni said. A yearlong investigation resulted in charges being filed against 24 individuals, including residents of Monmouth and Ocean counties.

The defendants, one of whom is a California resident who remains at large, were released on bail, Gramiccioni said.

The search warrants resulted in the seizure of approximately 21,000 pieces of THC-infused candy, which totaled more than 100,000 doses of marijuana edibles; 1,100 pounds of suspected marijuana; 6,200 flavored THC vape cartridges; and paraphernalia used to repackage candy, according to the prosecutor.

The street value exceeds $2 million, Gramiccioni said, and he explained that $1 million of that amount is the value of the THC-infused candy that was seized by law enforcement agents.

Gramiccioni called the results of the operation “one of the largest drug busts in state history.”

The illegal business operated in a warehouse in Manalapan and in a hangar at the Monmouth Executive Airport in Wall Township, the prosecutor said.

The THC products that were processed were intermingled with THC products the network’s operators allegedly illegally trafficked into New Jersey from a supplier in California, according to the prosecutor’s office.

Also seized were 1,151 Tic Tac-type containers without labels and numerous boxes and trays of Nerd Ropes in various stages of the infusion process, Gramiccioni said.

The prosecutor said $1.5 million in cash proceeds was seized. A total of $10.15 million in bank account assets and 18 high-end exotic vehicles with an estimated value of $2.78 million were also seized.

Gramiccioni said Dylon J. Addvensky, 27, of Freehold Borough, directed the operation’s distribution network on the east coast. He alleged that Addvensky maintained the storage and production facilities in New Jersey.

“We allege Addvensky … employed several other co-conspirators to deliver the product and make the THC-infused edibles,” Gramiccioni said. “We also allege Addvensky arranged the shipments from California through defendant Anthony Dalessandro, who remains at large. (Dalessandro) was responsible for the west coast distribution.”

Gramiccioni said law enforcement agents throughout the United States have been seizing similar illicit candy products that are illegally produced, distributed and sold.

“The counterfeit candy looks nearly identical to what anyone could buy at any convenience store or supermarket … Colorful and sugary candy like what we seized are among the best selling edible pot products in the black market,” he said, adding that the illicit product “presents an extreme danger to the community.”

Gramiccioni said the THC-laced products, which are wrapped in enticing colors, are designed to appeal to children “with the goal of creating a regular client who will be hooked on that product.”

He said the majority of THC-infused edibles are more potent than a marijuana joint.

“(THC products) are hard to distinguish from real candy and part of my press conference is to urge parents to protect your children and be vigilant about this trend,” Gramiccioni said, adding that the illicit sale of THC vaping cartridges is equally concerning.

Gramiccioni commended the agencies whose cooperation and partnership resulted in the successful completion of “Operation On The Ropes.”

John McCabe, chief of detectives at the Monmouth County Prosecutor’s Office, said, “I haven’t seen a case like this in my 33-year career.”

McCabe said there is no way to determine the amount of THC there is in an edible.

“The dangers of overindulgence of edibles is the highest when compared to any other way to ingest marijuana,” he said.

Gramiccioni, who said illegal edibles are marketed “on the street,” declined to say how the operation came to the attention of authorities. He said information and evidence obtained during 2019 caused law enforcement agencies “to undertake a very proactive and thorough undercover investigation.”

Asked how the illicit product was marketed, Gramiccioni said drug dealers or users of the illicit business would purchase or sell the product.