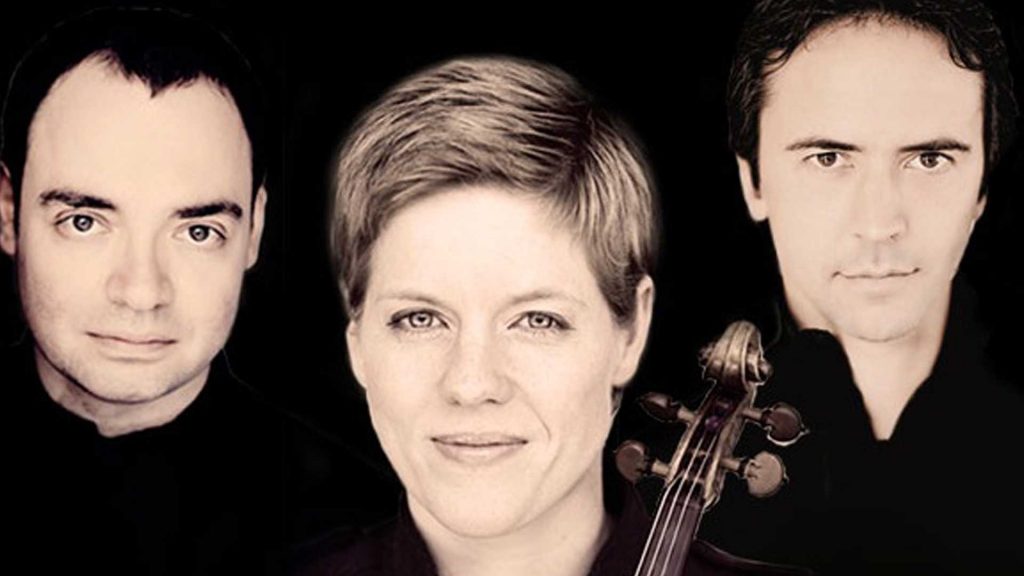 At 7 p.m., Princeton Professors Scott Burnham (Department of Music, Emeritus) and Elaine Pagels(Department of Religion) offer a pre-concert Warm Up free to all ticket holders, discussing Beethoven and his impact from a range of perspectives.

There are two free related events to this concert, as part of Princeton University Concerts’ “Beyond the Music” programming.

On Feb. 1 at 3 p.m. in the Princeton Public Library, families are invited for a free, unticketed screening of the children’s movie “Beethoven Lives Upstairs.” This lighthearted family drama was awarded the 1993 Emmy for Outstanding Children’s Program.

Cellist Jean-Guihen Queyras will participate in a “Live Music Meditation” on Feb. 6 at 12:30 p.m. at Richardson Auditorium, Alexander Hall. The second-to-last Live Music Meditation of the 2019-20 season, this is an opportunity for the community to participate in a free meditation guided by Associate Dean Matthew Weiner (Office of Religious Life) during Queyras’ playing. No experience necessary. Doors open at noon.

Further information about both of these programs are available at princetonuniversityconcerts.org.

Violinist Isabelle Faust performed a recital of J.S. Bach’s complete violin sonatas and partitas in 2016, surrounded by candlelight, at the Princeton University Chapel.

Cellist Jean-Guihen Queyras made his Princeton debut as part of the Arcanto Quartet in the fall of 2015.

The return of the three artists together presents an opportunity to experience their artistry in a completely new light, and as part of the historic celebration of Beethoven’s Sestercentennial.

Princeton University Concerts will also conclude its 2019-20 season with a second all-Beethoven program on April 30 at 8 p.m., when baritone Matthias Goerne and pianist Jan Lisiecki perform the composer’s songs.

About Isabelle Faust
Isabelle Faust captivates her listeners through her insightful and faithful interpretations, based on a thorough knowledge of the historical context of the works as well as her attention to current scholarship.

At an early age, Faust won the prestigious Leopold Mozart and Paganini competitions and was soon invited to appear with the world’s leading orchestras, including the Berlin Philharmonic, Boston Symphony Orchestra, NHK Symphony Orchestra Tokyo, Freiburg Baroque Orchestra and the Chamber Orchestra of Europe.

To highlight this versatility, in addition to her mastery of the great symphonic violin concertos, she also performs works such as György  Kurtág’s “Kafka Fragments” with soprano Anna Prohaska, Stravinsky’s “L’Histoire du soldat,” or Schubert’s octet on historical instruments, for instance.

She will premiere several new works for violin and orchestra in the coming seasons, including concertos by composers Péter Eötvös, Brett Dean, Ondřej Adámek and Oscar Strasnoy.

A prolific recording artist, Faust has a large discography and her critically acclaimed recordings have received the Gramophone award, the Diapason d’or, the Choc de l’année, and other prizes. Her most recent recordings include Bach’s violin concertos with the Akademie für Alte Musik Berlin and Mendelssohn’s violin concerto with the Freiburg Baroque Orchestra conducted by Pablo Heras-Casado.

Her album of Bach’s harpsichord sonatas with Kristian Bezuidenhout was released in March 2018. Other notable recordings include Bach’s Sonatas and Partitas, and Beethoven’s and Berg’s violin concertos with Claudio Abbado and the Orchestra Mozart.

Faust shares a longstanding recital partnership with pianist Alexander Melnikov, with whom she has recorded many discs for Harmonia Mundi. During the 2019-20 season, Faust is Artist-in-Residence at the Royal Concertgebouw Amsterdam, Philharmonie Essen, Centro Nacional de Difusión Musical Madrid, and Philharmonie de Luxembourg.

About Jean-Guihen Queyras
Curiosity, diversity and a firm focus on the music itself characterize the artistic work of Jean-Guihen Queyras. Whether on stage or on record, one experiences an artist dedicated completely and passionately to the music, whose humble and quite unpretentious treatment of the score reflects its clear, undistorted essence.

The inner motivations of composer, performer and audience must all be in tune with one another in order to bring about an outstanding concert experience: Jean-Guihen Queyras learned this interpretative approach from Pierre Boulez, with whom he established a long artistic partnership.

This philosophy, alongside a flawless technique and a clear, engaging tone, also shapes Queyras’ approach to every performance and his absolute commitment to the music itself.

His approaches to early music – as in his collaborations with the Freiburg Baroque Orchestra, the Akademie für Alte Musik Berlin and the Concerto Köln – and to contemporary music are equally thorough. He has given world premieres of works by Ivan Fedele, Gilbert Amy, Bruno Mantovani and Thomas Larcher, among others.

Conducted by the composer, he recorded Peter Eötvös’ Cello Concerto to mark his 70th birthday in November 2014. The versatility in his music-making has led to many concert halls, festivals and orchestras inviting Queyras to be Artist-in-Residence, including the Concertgebouw Amsterdam, the Festival d’Aix-en-Provence, and Wigmore Hall London.

Queyras holds a professorship at the University of Music Freiburg and is Artistic Director of the Rencontres Musicales de Haute-Provence festival in Forcalquier.

About Alexander Melnikov
Alexander Melnikov graduated from the Moscow Conservatory under Lev Naumov. His most formative musical moments in Moscow include an early encounter with Svjatoslav Richter, who thereafter regularly invited him to festivals in Russia and France. He was awarded important prizes at eminent competitions such as the International Robert Schumann Competition in Zwickau (1989) and the Concours Musical Reine Elisabeth in Brussels (1991).

Additionally, the artists recently recorded a unique all-Schubert program of four-hand pieces, which they have also performed in concert, including at Princeton. An essential part of Melnikov’s work is intensive chamber music collaboration with partners including cellist Jean-Guihen Queyras and Isabelle Faust.

Melnikov’s association with the label Harmonia Mundi arose through his regular recital partner, violinist Isabelle Faust, and in 2010 their complete recording of the Beethoven sonatas for violin and piano won a Gramophone Award. This album, which has become a landmark recording for these works, was also nominated for a Grammy. Their most recent release features the Brahms sonatas for violin and piano.

In the 2019-20 season Melnikov will tour his project “Many Pianos,” where he performs a solo recital on different instruments reflecting the periods in which the works were written, and which will take him to Tokyo, Vienna and Schwetzingen, among others.

In addition to concerts with Ensemble Resonanz, Gewandhaus Orchestra Leipzig and Basel Symphony Orchestra, he continues his close collaboration with Tapiola Sinfonietta. Further highlights include performances in the Chamber Music Hall of the Philharmonie Berlin, in Wigmore Hall London, at the Beethoven Week in Bonn, in São Paulo, as well as concert tours with Isabelle Faust to North America and Asia.