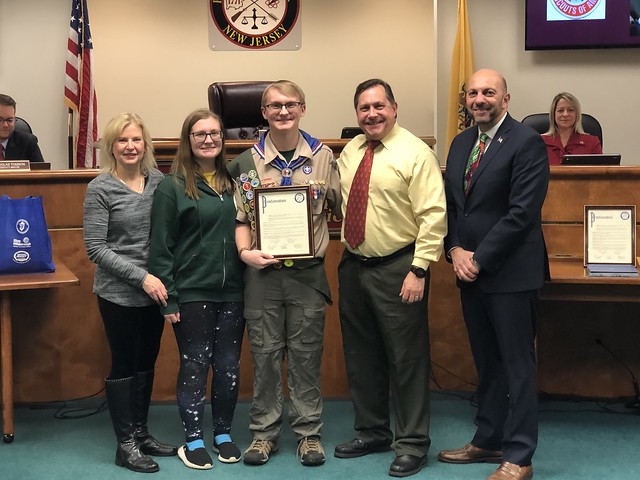 Hillsborough Boy Scout Jack Szwarc was recognized at a Dec. 17 Hillsborough Township Committee for having earned the rank of Eagle Scout in 2019, and for his project where he created a monument dedicated to active duty police at the municipal building. Submitted Photo
×

Hillsborough Boy Scout Jack Szwarc was recognized at a Dec. 17 Hillsborough Township Committee for having earned the rank of Eagle Scout in 2019, and for his project where he created a monument dedicated to active duty police at the municipal building. Submitted Photo

The Hillsborough Township Committee recognized a local boy scout for his recent achievement to reach Eagle Scout as well as his contributions to the community.

Jack earned the rank of Eagle Scout in 2019, and for his Eagle Scout project, he created a monument dedicated to active duty police at the municipal building.

The monument consisted of a two-ton boulder with a commemorative plaque surrounded by two granite benches and a garden. The project took over 200 hours with the assistance of 18 people.

“The Hillsborough Township Committee recognizes and extends our sincere congratulations to Jack Szwarc for having achieved the rank of Eagle Scout, an honor for both himself and those who have guided him, and our best wishes for a bright future,” said then Hillsborough Township Mayor Frank DelCore.

Formerly a section of land on the municipal property that officials said was in need of an upgrade and improvements, DelCore stated that the newly installed monument site is worth paying a visit.

“If you have not seen the monument, it is just outside of the police department, and it was an area that needed a little upkeep. It has turned into a beautiful monument area for our active duty police,” DelCore said.

On June 29, a special ceremony was held at the municipal complex to honor the work and dedication of Jack who chose to acknowledge the Hillsborough Township Police Department by developing a monument site for them as part of his Eagle Scout project. The site is located behind the Hillsborough Township Municipal Building and adjacent to the police department entrance.

The project, which was completed in June, had been approximately a year in the making for Jack, who said he first approached the township to develop an idea as to what could be done to honor police officials. With help from Hillsborough Township Administrator Anthony Ferrera, a plan was put in place to create a monument site.

Following the acknowledgment from the township committee at the December meeting, Jack expressed his thanks to multiple municipal officials who helped make his project possible as well as others who provided him support along the way.