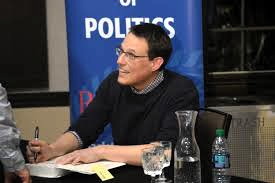 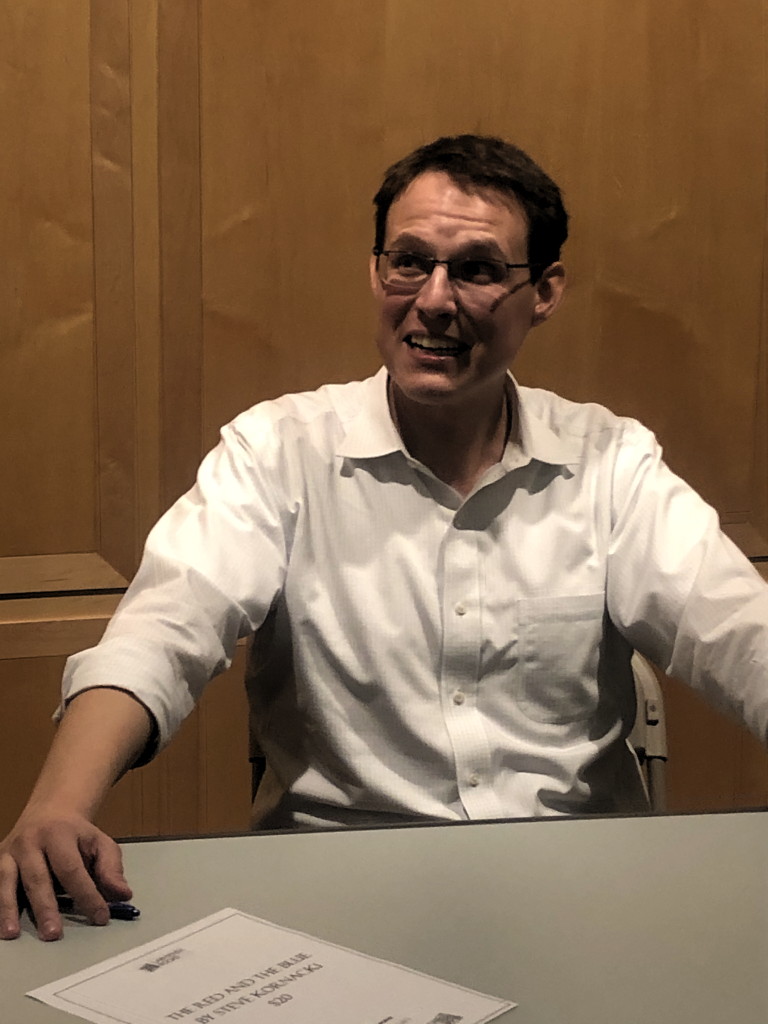 2 / 2
Steve Kornacki spoke at the Princeton Library on Jan. 8.PHOTO BY PAM HERSH
×

2 / 2
Steve Kornacki spoke at the Princeton Library on Jan. 8.PHOTO BY PAM HERSH

The Princeton Public Library on hosted a rock star on Jan. 8 who attracted a standing room only crowd. As a huge fan, I knew I had to arrive early to get a seat for the performance that comprised Princeton idiosyncratic rock-star qualities – words, facts, statistics, fast-talking, intensity, self-deprecation, and an irrepressible passion for politics.

Steve Kornacki, national political correspondent for NBC News, regular contributor to MSNBC, and author (“The Red and the Blue: The 1990s and the Birth of Political Tribalism”), delighted the crowd with a data-driven but story-telling-styled analysis of the Democratic primary race.

Being Princeton-centric, however, I also wanted to know about the connection between this nationally respected political commentator and New Jersey, specifically Princeton.

The introduction of Kornacki came from Ingrid Reed, his good friend who recruited him for his performance in Princeton. Ingrid, renowned New Jersey political guru and particularly revered by Princetonians and by Kornacki, is the former director of the New Jersey Project at Rutgers’ Eagleton Institute and founding board member of NJ Future.

“I met Ingrid when I came to New Jersey to cover state politics at the end of the summer of 2002,” Kornacki said. “I can remember the first time I met her in person – at a Doug Forrester/Bob Torricelli Senate debate at the News 12 studios in Edison. I was there to cover it and she was there because she wanted to see the debate, and they didn’t get News 12 in Princeton (and, I guess, still don’t). … When I started my weekend show on MSNBC ‘Up,’ I was thrilled to get her on as a guest a number of times. Between [former Gov.] Chris Christie’s national ambitions and the bridge saga, there was plenty of need for New Jersey expertise.”

Although Kornacki attended college (Boston University) in his native Massachusetts, he told me that his real education took place in New Jersey. And people like Reed were his professors.

“While I was trying to figure out what to do with myself after college, I found an opportunity to write about New Jersey state politics for a website, PoliticsNJ.com. This was 2002 – the Internet was still relatively new, and the idea of launching a web-based political news operation was kind of out there. The owner/editor was also anonymous, but it was clear to me that the site already had deep credibility with the New Jersey political/media community. So I took a chance because it seemed interesting.

“Only at the very end of my tenure did I finally meet my anonymous boss, who turned out to be David Wildstein (Republican Party politician, former mayor of Livingston, and implicated in the Bridgegate affair), and I will always be grateful to him for taking a chance on me. I spent the next three-plus years traversing the state, covering elections at every level, from presidential candidate visits (there weren’t many, but we got a few) to internal county party battles (those were a ton of fun).

“I can’t express how much I loved those days. I learned so much, met so many great people and so many once-in-a-lifetime characters. Whenever I each for my favorite stories to tell, they are invariably from my Jersey days,” he said.

Another member of the Kornacki fan club in the library audience on Jan. 8 was New Jersey’s famed political/Statehouse columnist, Charlie Stile.

As the top reporter for the fledging Politicsnj.com in the early 2000s, Stile said Kornacki demonstrated “a rare talent for taking an almost encyclopedic knowledge of granular New Jersey politics — the county committee endorsements to the backroom dealing of party bosses — and spin it into a seamless narrative, both in print and in a panel discussion without notes or charts. He never loses sight of the larger picture, which often happens in the day to day coverage of politics.”

Kornacki noted that “the political world has changed, but it was just six or seven years ago that Christie was a huge deal nationally, seen as the most likely Republican presidential nominee for 2016. So there was plenty of interest in him, both before and during the Bridge affair. And if you want to talk Christie or anything related to New Jersey, you’ll want to talk to Charlie Stile.”

Reflecting New Jersey’s “It’s a Small World/No Degrees of Separation” character, Stile came into my world when he, and his wife Maria LoBiondo, worked with me at The Princeton Packet, where I was managing editor in the 1980s.

“I sat next to him at an Eagleton panel some years ago and watched him with awe as he explained how the rise of Chris Christie was aided and abetted, indirectly by the rise of Jon S. Corzine….

“Steve spun this into a colorful yarn, and without notes. He captivated the small Eagleton audience. And I was looking down at my notes and looking for the exit. There was not much for the rest of us to contribute to the discussion. He blew us away. You could see right then he was a special talent,” Stile said.

Stile, who also appeared on “Up,” described Kornacki’s “almost preternatural energy and enthusiasm. During the Bridgegate scandal, I was a guest on his early Sunday morning MSNBC show ‘Up.’ My wife and I arrived in a semi-comatose blur at 7 a.m., but he was already whirring at full adrenaline, asking probing questions that were drawn from a multi-layered understanding, as if he were back in the Jersey newsroom, leading the pack.

“And for a time, he was. He broke a related bombshell interview with the Hoboken mayor, who said Christie administration officials threatened to hold up superstorm Sandy relief aid, if her administration failed to approve a major redevelopment project in Hoboken.

“This was not your cliché of an empty-headed anchor spouting talking points and questions that were fed into his ear piece by his producer. Steve did his own homework,” Stile said.

Kornacki, who lives in Manhattan, seven subway stops from NBC studios, promised me he would keep up with his “education” by continuing his intense coverage of New Jersey politics – and coming back to Princeton, which “some think is not really part of New Jersey …”

Kornacki recounted one of his favorite New Jersey stories about Princeton attitude.

“Frank Lautenberg (former U.S. Senator from New Jersey) being at some kind of event overseas asked a woman in her group where she was from. When she told him Princeton, he replied that he was also from New Jersey, but she then corrected him and emphasized that she was from Princeton – and not New Jersey.”

I urged Kornacki to return to Princeton to tell more New Jersey stories – before Princeton secedes from the state by closing all the bridges into town. That would be another New Jersey political “bridge” story guaranteed to enhance Kornacki’s political education.