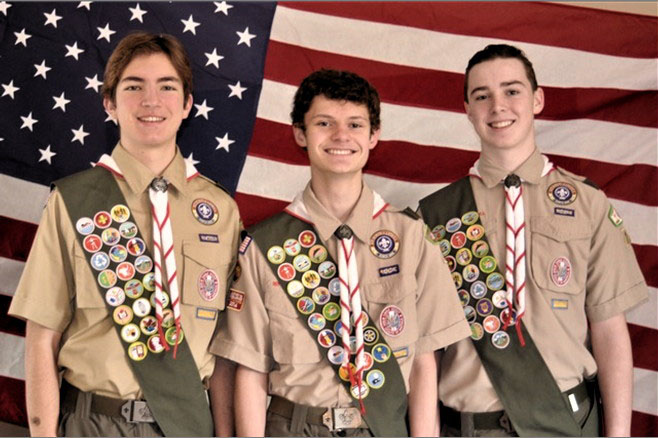 A trio of Boy Scouts from Troop 18, Freehold, John Thomas Silver, 16, Nicholas Scott Stevens, 16, and Robert Evan Wilbur, 16, have attained the rank of Eagle Scout, the highest rank in scouting.

The rank of Eagle Scout is attained by less than 1% of all individuals who begin the journey through Boy Scouting, according to a press release.

The three young men are members of Boy Scout Troop 18 and they received their Eagle awards at an Eagle Scout Court of Honor ceremony that was held at the Knights of
Columbus Hall, Freehold Borough, on Jan. 26.

J.T.’s Eagle Scout project saw him lead more than 20 of his fellow scouts and adult volunteers in the repainting of the Grand Hall of the Knights of Columbus Council 1672, Freehold Borough, and replacing the vinyl flooring in an area adjacent to the hall’s service bar.

As a result of J.T.’s leadership and organizational skills, the Knights of Columbus will now be in a position to present their premises for their own events, as well as to those interested in renting out the hall in an effort to raise funds for their own service projects, according to the press release.

J.T. is a junior at Marlboro High School, attending the business administration program. He is a varsity letterman on the football team, a member of the National Honor Society, a member of the school’s chapter of the Future Business Leaders of America Club and Distributive Education Clubs of America.

J.T. enjoys playing the piano and is an altar server at St. Rose of Lima Church, Freehold Borough.

The memorial stone was donated by H.T. Hall Memorials of Spring Lake Heights and contains the logos of the five military branches and the emblem of St. Rose High School. The project will allow students and veterans to remember the sacrifice the nation’s armed forces personnel have made, according to the press release.

Nicholas is a junior at St. Rose High School, Belmar. He is a member of the bowling team and the fishing club. Nicholas plans to attend college with a focus on computer science and history, according to the press release. He is a parishioner at St. Rose of Lima Church, Freehold Borough.

Robert’s Eagle Scout project entailed the construction and planting of a butterfly garden on the grounds of the Lafayette Mills School, Manalapan, where he was a student from first through fifth grade.

School staff will use the butterfly garden as a teaching tool regarding the butterfly’s life cycle, eating habits, the garden’s plants, conservation and nature, according to the press release.

Robert organized the efforts of more than 25 Scouts and adults in the construction of the butterfly garden. The project will allow Lafayette Mills pupils to learn responsibility in maintaining the garden and its natural beauty during the school year, according to the press release.

Robert is a junior at the Scholars Center for Humanities at Howell High School. He is the president of his junior class, a member of the National Honor Society, co-editor of the Laureate literary magazine, a cross country varsity letterman and a member of the debate club, the film club and math league. He plans to pursue a college degree in writing and film, according to the press release.

In recognition of their accomplishments as Boy Scouts, the three young men each received commendations from governing bodies and civic organizations throughout the area.