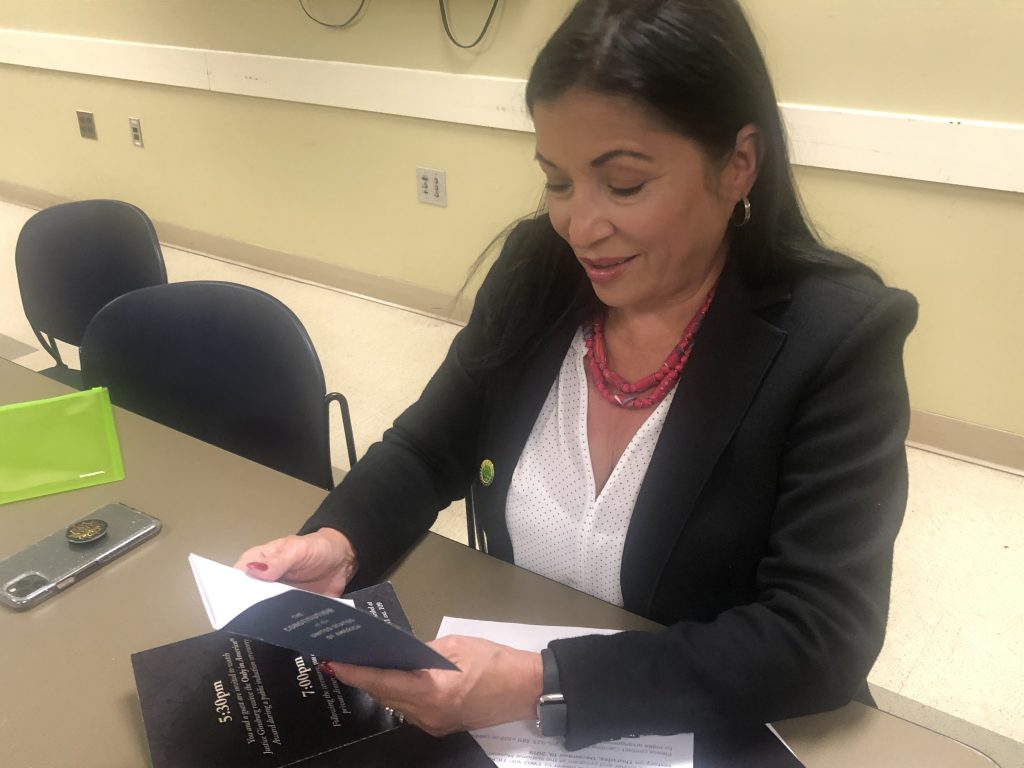 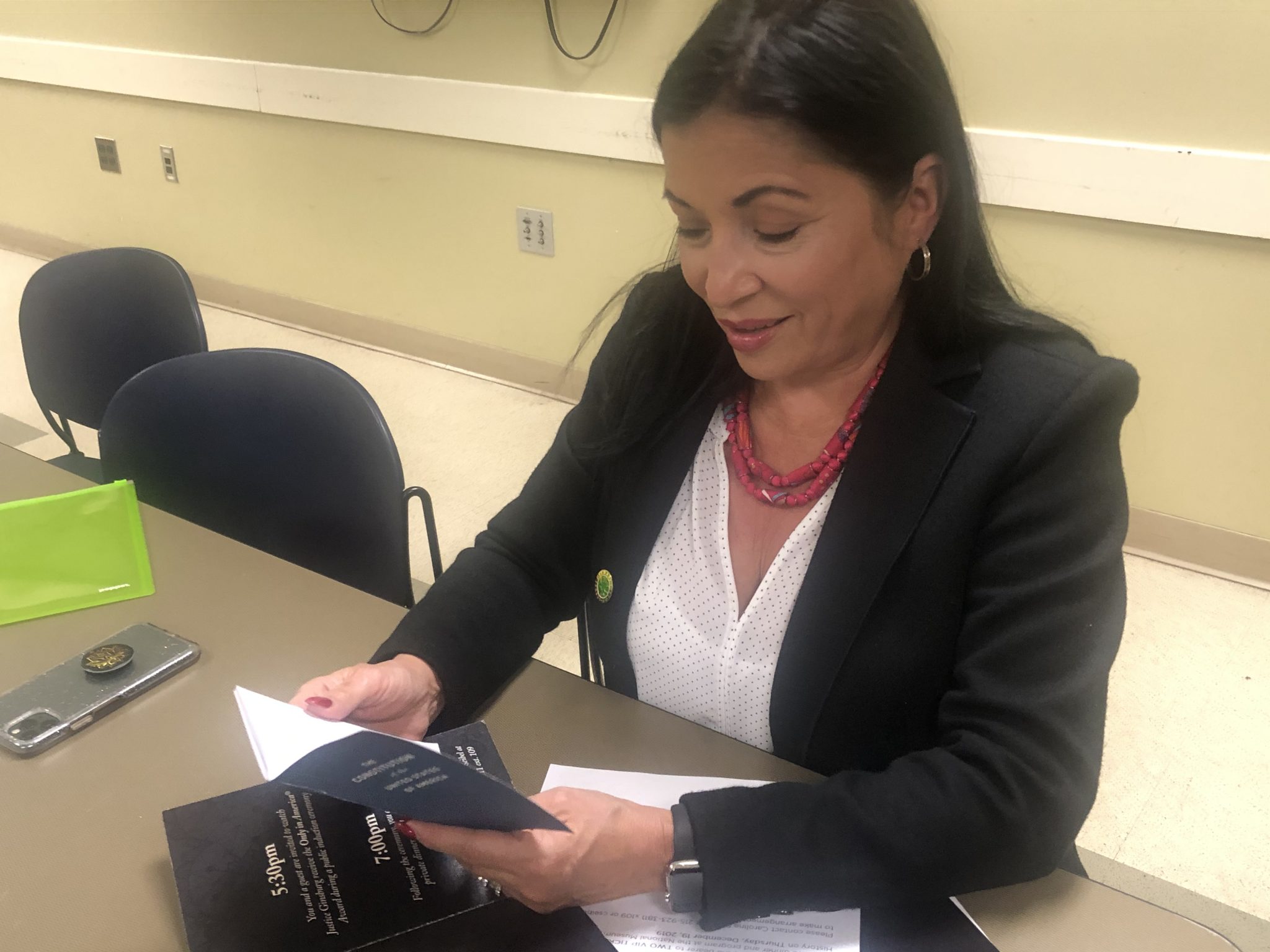 Princeton Council member Leticia Fraga thought she was getting an early Christmas present.

In fact, it may have been an early Martin Luther King Day present.

On Dec. 19, four weeks and one day before MLK Day, Leticia had dinner with Supreme Court Justice Ruth Bader Ginsburg (RBG) – fulfilling a dream she never dared to dream.

The “incredible experience” inspired her to push forward with renewed energy for the realization of her often-articulated dream to achieve social justice for all regardless of race, sex, citizenship status and financial resources.

Embedded in the amazing event was the fact that Leticia believes her mother, Angela Fraga, who died two weeks before the Dec. 19 dinner, enhanced the profound significance of the occasion.

The first Latinx to ever be elected to a Princeton municipal governing body, Leticia, who came to the United States from Mexico when she was 12, “loves telling the RBG story to anyone who will listen.”

The event included a silent auction comprising several experiential items, including an African safari, VIP tickets to an Elton John concert, and a “Very Special Evening with Ruth Bader Ginsburg.”

“The only item that I had my heart set on was ‘the evening with Ruth Bader Ginsburg… I set my watch alarm to go off at 9:55 p.m. five minutes before the auction closed at 10 p.m….I headed over to the auction table, made my final bid and stood next to the bid site on guard for any last minute bid attempts,” Fraga said.

Several people tried for the RBG dinner – including her husband’s boss. But Leticia achieved a heart-thumping victory, and her husband suffered no ill consequences from his wife outbidding his boss.

On Dec. 19, Justice Ginsburg was inducted into the National Museum of American Jewish History’s ‘Only in America’ Hall of Fame in Philadelphia at a ceremony emceed by NPR Legal Affairs Correspondent Nina Totenberg and attended by more than 300 people.

Ginsburg gave a keynote address in which she focused on women who inspired her in her career (“as RBG has inspired me,” said Leticia).

The theme was how the future of our democracy relied on people with the courage to stand up, speak out, and be heard on social justice issues, particularly in turbulent times.

“At the end of her speech Justice Ginsburg quoted Anne Frank, whose words were so timeless that they could have applied to 2020. Some people just gasped,” Fraga said.

The ceremony was followed by a private dinner for about 40 people seated at one long table, and Leticia happened to be sitting diagonally across from Ginsburg. But the truly magical part came as a result of serendipity and perhaps a bit of Fraga’s mother’s spirit lingering over the proceedings.

“My mother, sharing my social justice passion and deep reverence for Ruth Bader Ginsburg, was very excited for me. when I told her about my auction item win. Sadly, she died before she could hear about the magical evening. I believe, however, that she was there….

“As my husband and I were getting into the car to go to Philadelphia for the dinner, he asked me whether I had something that RBG might sign. I thought it would be awkward to bring the book she wrote a few years ago. I ran back into the house to look for something worthy of her signature, the book cover; the invitation; a newspaper article? And suddenly I spied a pocket constitution that I thought was lost weeks earlier. It was just sitting on a shelf. I acquired the constitution from the ACLU for the demonstration in Princeton to counter the White Nationalist rally that never came to fruition. The missing constitution seemed to have materialized out of thin air.

“When we all were seated at the dinner, I did not see anyone approaching Justice Ginsburg, no one trying to talk to her or take pictures. In spite of feeling intimidated, I mustered all of my courage to approach Justice Ginsburg. I told her how meaningful it was for me – as a woman and the first Latinx to be elected to Princeton’s governing body, and a first generation immigrant, – to have this great honor of meeting her. I credited her for my being able to live a life that I never could have imagined,” Fraga said.

Ginsburg nodded and willingly signed the constitution. She was particularly deliberate to get her signature just right.

Leticia’s next “dream” is to get the signatures of Princeton University alumni Supreme Court Justice Elena Kagan and Supreme Court Justice Sonia Sotomayor on her pocket constitution when they come to visit their alma mater. But the real treasure of the evening for Leticia was a reaffirmation of her public service mission in life.

To quote an author that inspired Justice Ginsburg:

“How wonderful it is that nobody need wait a single moment before starting to improve the world,” Anne Frank.