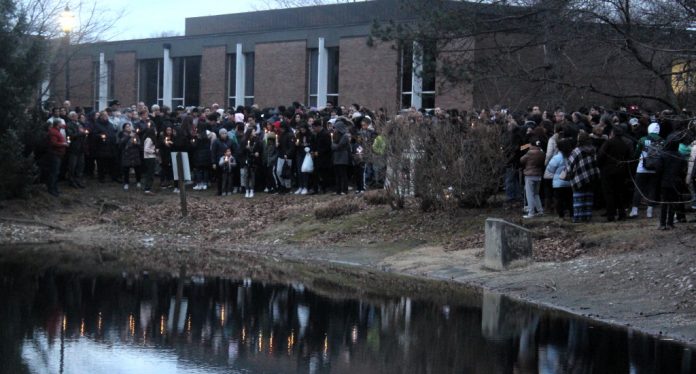 EAST BRUNSWICK–More than 200 residents gathered together during the Township of East Brunswick’s memorial vigil to honor Yousef Khela, who died after falling into an icy pond last week.

Around a large photo of the 13-year-old, residents adorned his memorial with candles and flowers, which was placed close to the pond on Civic Center Drive where he lost his life.

Mayor Brad Cohen, Chief of Police Frank LoSacco, members of the Township Council, Middlesex County Freeholder Kenneth Armwood and Superintendent of Schools Victor Valeski were among those who attended the candlelight vigil on Jan. 26 at the municipal pond.

On Jan. 22, the East Brunswick Police Department’s patrol units responded to the pond for a report of juveniles who fell through the ice. Two males had self-rescued themselves off of the ice, but one juvenile remained in the water. After members of the township’s fire districts recovered Yousef from the pond, paramedics and emergency medical personnel transported him to Robert Wood Johnson University Hospital in New Brunswick where he was later pronounced deceased at the hospital on Jan. 22.

Explaining why the township decided to have the vigil at the municipal pond, Cohen said, “This is an area that we have traditionally used for Veterans Day, for Memorial Day services, it’s an area we have used for our Unity Walk. … So we want this area to be remembered not for the tragedy … but as an area of peace.”

When asked to speak at the vigil, LoSacco said he did not prepare a single word to say because he does not know how someone can prepare for this.

On that tragic day, LoSacco said, “I witnessed just how dedicated, professional and selfless all of those first responders were. We grieve for this community. I saw how hard they worked [and] I saw the dedication they showed.”

While attending Yousef’s funeral on Jan. 23, LoSacco said, “I listened to Father Mark [Hanna] and the bishop speak and they were very direct in their thanks and praise to the first responders. It’s much appreciated in this hard time and they left with something that I remember they said, that ‘no matter how hard we try someone had a bigger plan in mind.’ So to the family and the community on behalf of the Township of East Brunswick’s emergency services, we are so sorry.”

To move forward and become a stronger community, Valeski said, “May I suggest that our individual attitudes will determine our collective altitude, our attitudes towards each other whether in person or how we treat each other on a variety of social media platforms will determine how high we can go [and] how much we can achieve as an inclusive high performing school district, a family that is also part of an inclusive township family.

“My hope in spite of the loss and grief is tonight ignites a catalyst for change. If we can pause for an attitude that our individual differences make us greater together our … opportunities are limitless. We all have choices. Wouldn’t it be awesome if we all choose to be influencers for positive change and continue to bring us all together as a school family and as a township family and I have to believe that Yousef would agree.”

Hanna, from Saint Mary Coptic Orthodox Church, where Yousef’s family are members, said this has been a very difficult loss, especially for the Coptic Orthodox community, and that the community is thankful for all the love and support the township has shown them.

On behalf of the family and on behalf of the church, Hanna thanked Cohen, the Township Council, the police officers, the firefighters, the East Brunswick Board of Education and EMS workers for all of their efforts to comfort them during this tragic time.

Hanna’s colleague then read a passage from the Bible’s Book of Ecclesiastes, Chapter 3, Verses 1-8.

Ending his speech, Hanna said, “Yousef was a very good boy. A boy that any father and mother would love to have. Very obedient towards his parents, loved his family, loved his sisters, loved his church, loved his community, and one of [Yousef’s dreams] … was to actually help everyone. So if you want to honor Yousef and honor the life of Yousef my advice is to all take part and help others.”

Marian Nasser, who was one of Yousef’s friends, said, “No matter how much we say to describe him, we don’t have enough words.He was beyond amazing and always cared for each and every one of us.”

Cohen then recited Psalms 113 Verse 7 to emphasize how the community should work together in unity, especially during the tragic time.

In the past few days, Cohen said he learned a lot about the community. He thanked the first responders, the local clergy, the medical staff at Robert Wood Johnson University Hospital, and the school district for all their actions and support.

“To this East Brunswick community of ours that is here today, who showed up in record numbers to the wake and at the funeral, to everybody who was kind enough to finally put words and comments on Facebook that didn’t argue with one another … we were all one as a community and we showed support for one another.”

Cohen said residents should also show love and support to the two boys who survived the tragic incident.