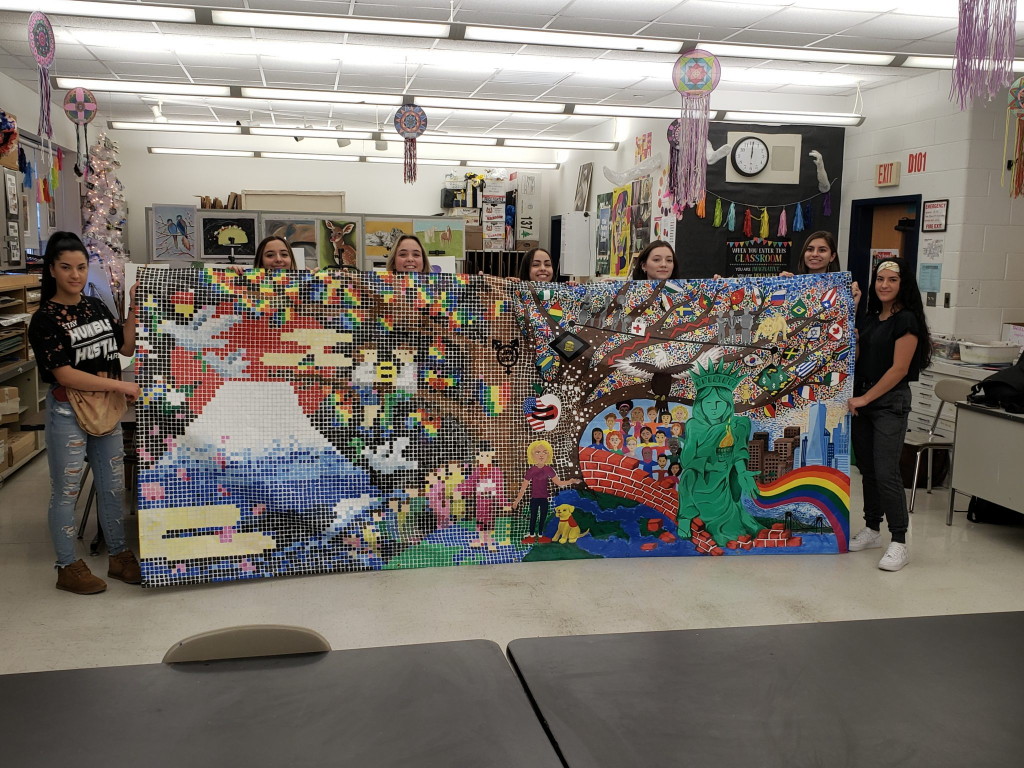 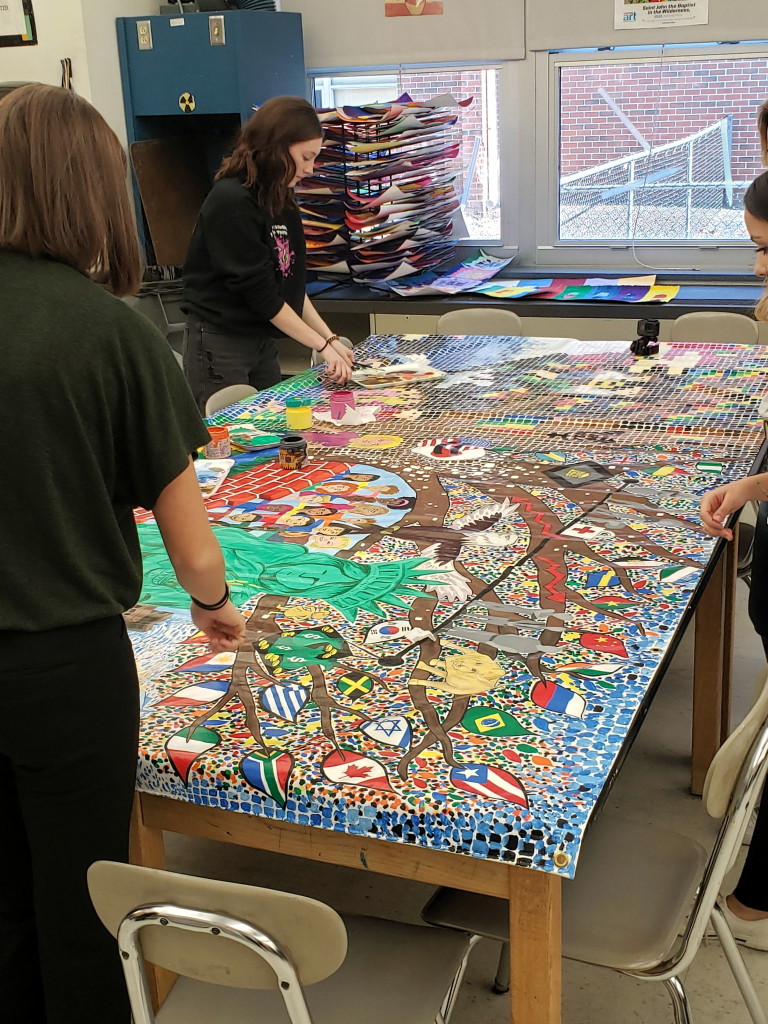 Students at Marlboro High School and students at a Japanese high school pooled their creative talents on a mural that will be displayed at the 2020 Summer Olympics in Tokyo.

Eight seniors at Marlboro, with the assistance of three art teachers, and students from Tokyo Joshi Gakuen High School created a mural based on a United Nations sustainable goal for 2020. The goal is to reduce inequality in all forms, i.e., racial, gender, financial, etc.

According to the teachers, Marlboro is the only high school in the United States that will have artwork represented at the Tokyo Olympics.

Casella said the school’s art program worked with the Japan Art Mile Foundation on a mural in 2019. When Casella contacted the foundation to collaborate this year, Marlboro students were invited to work on the mural for the Olympics.

The students from Tokyo worked on half the mural first and then sent it to Marlboro. Tokyo’s half includes Mt. Fuji in pixilated art and Marlboro’s half includes the Statue of Liberty painted in the form of realism.

“It’s really about saying to the students that if they are not discriminated against, how are you involved in this?” Casella said. “Every human being should feel important and have some dignity.

“The goal is that we wanted to reach out to our student base and the community and show we are part of one as a world. Through art, we were able to communicate and still have the same goals; bringing that to light and hopefully being able to eradicate this in the future,” the teacher said.

“It was great to see the kids collaborate culturally because they had to take videos of the process on each side and share them with each other, so they really got to see the similarities between these two cultures and they got to highlight some of these inequalities we all face,” Zeller said.

“We are focused on the United States and the kids especially know what is going on in their local area, but to go globally and see kids on the other side of the world … They really learned a lot and it was fun to see them embrace that experience and make those connections,” the teacher said.

“It brought something to the experience because we are representing the United States. We felt added responsibility to really come out and have a strong showing and put our best into it.

“We are really proud; the kids are super proud to be representing the United States and we try to hone in on that. We are a big country, we have a lot to offer and to be the only one is special,” Zeller said.

“As Americans, we can be into our own world because we are such a wealthy nation, but they wanted to bring that out which is why there is so much diversity in that mural. They wanted to show that we are aware of the global inequalities,” Fraser said.

“It is an honor that the Japan Art Mile Foundation chose us to be a part of this and we are proud of being part of a wonderful experience that art can speak to others visually and make that message come across by being able to read the mural through imagery,” the teacher said.

“I think the students have a sense of pride that ‘I am an American, but I can be a part of a global experience as well.’ As teachers, we are proud of our students here,” Fraser said.

Jane Goldstein, supervisor of the Marlboro Art Department, spoke about the mural and those involved with the project, saying, “There is such creativity, talent and dedicated teachers and students who have put so much energy, creativity and talent into this project.

“When this canvas arrived it was half done from the school in Japan and the other half was blank. There was reflection, brainstorming and all of the symbolic ideas. They put these ideas (into) sketches and worked on it.

“It was in their hearts and souls that they wanted to convey to that sustainable goal from the U.N. It’s a beautiful and wonderful process and I’m proud of it. I really am privileged to work with them,” the supervisor said.

Several students who worked on the project spoke about creating the mural, representing their country and the topic of inequality.

“When I found out I was going to be working on it, I was overwhelmed because it is going to the Olympics in Tokyo,” Ignarra said. “At the same time, working with my friends and building a connection between everyone calmed me down.

“I think it’s awesome we can come together and use art as a way to communicate with other countries. It’s an awesome topic and it’s important to address the issue of inequality. It’s the 21st century, everyone has a voice and that potential to speak out so why should we not say anything?”

“Considering that the United States is specifically known as being a diverse nation, I think it’s nice we were able to represent that through this piece and to be able to show it off at an event like the Olympics,” Bonilla said.

“I thought it was a cool concept. The magnitude didn’t hit me until we got (the mural) back from Japan,” Lyons said. “It was a surprise what they did until we saw it so we had our plan and we had to mesh it together. The contrast shows the differences in our cultures and the importance of diversity and inclusivity, which is a cool thing to represent.”