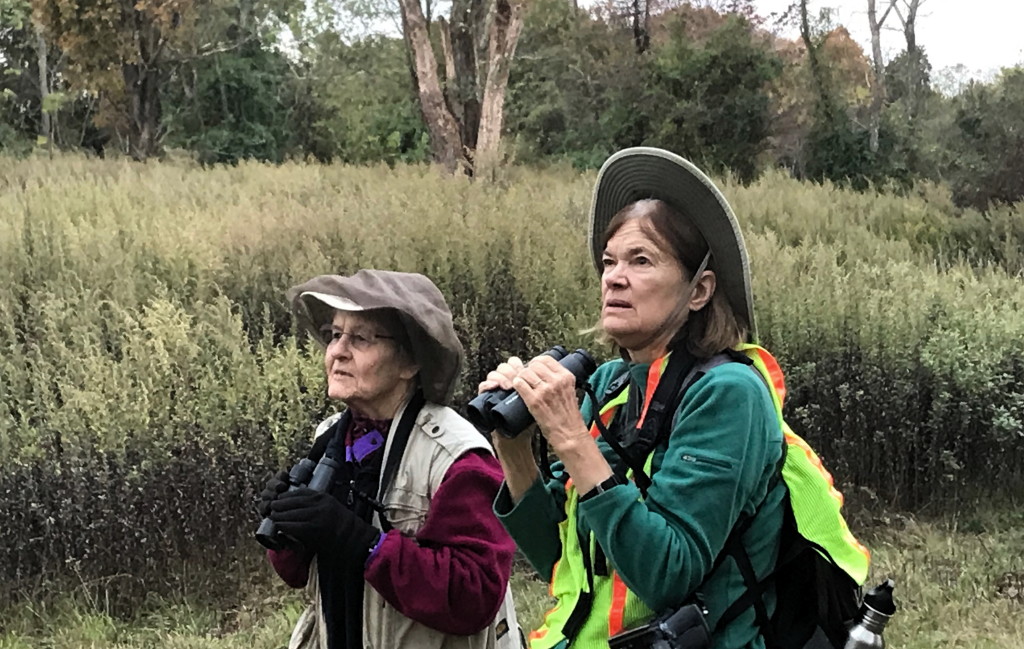 Hopewell-based ornithologists, Sharyn Magee and Hannah Suthers (L) and Sharon Magee (R) explained to a standing-room-only crowd at D&R Greenway Princeton Headquarters on Feb. 4 why the bird population in Central Jersey is greatly diminished. The birds are vanishing, reported Ms. Magee and Ms. Suthers to a standing room only crowd.
×

Hopewell-based ornithologists, Sharyn Magee and Hannah Suthers (L) and Sharon Magee (R) explained to a standing-room-only crowd at D&R Greenway Princeton Headquarters on Feb. 4 why the bird population in Central Jersey is greatly diminished. The birds are vanishing, reported Ms. Magee and Ms. Suthers to a standing room only crowd.

Indoor Birdland in New York City is thriving, outdoor bird land not so much – the musicians delivering the glorious singing are becoming scarcer and scarcer.

The birds are vanishing, reported Ms. Magee and Ms. Suthers to a standing room only crowd. A recent Partners in Flight bird study, published by the Cornell Ornithology Lab, showed that 2.9 billion birds have disappeared across North America in the last 50 years, a 29 percent loss. The study found that more than 1 in 4 birds have disappeared, especially historically common species, such as sparrows, blackbirds, warblers, and finches.

“Unfortunately, we’re seeing similar declines in local bird populations here in central New Jersey,” said Linda Mead, CEO of D&R Greenway, founded in 1989. “The new research ought to be a wake-up call for everyone who cares about wildlife to join our mission to preserve natural habitats. In addition, there are important but simple steps we can take in our daily lives to protect birds.”

Their regular population estimates are part of the larger database used in the Partners in Flight study. Dubbed the Rachel Carson(s) of the ornithology world, the two women have given a powerful local voice to the concepts expressed in Rachel Carson’s Silent Spring, the famous environmental science book, published in 1962, that documents the adverse environmental effects caused by the indiscriminate use of pesticide.

The speakers shared trends they have observed locally and identified birds most at risk in our area. The biggest factor contributing to the reduction of the bird population is nothing complicated, just tragic – “habitat loss, degradation and fragmentation. Development and intensive agriculture destroys the habitat” conducive for a thriving community of birds,” said Ms.Magee.

“Birds need food, shelter and water – a well vegetated stream corridor provides all three. Too often vegetation is cleared to the stream bank, leaving no cover for birds and no habitat for the insects” that are so necessary for feeding to baby birds. Virtually, all North American land birds require insects to feed their young. Clearing stream banks and removing hedges between fields has greatly reduced bird diversity in farmlands. ….Agricultural pesticides have been implicated in the decline of insect populations and the vertebrate species that depend upon them,” said Ms. Magee. Baby Bard Swallows, she noted, were born in the Red Barn within St. Michael’s insecticide free zones – very much needed for nesting success.

The St. Michaels property, which was preserved in 2010 and expanded in 2017, is a more than 400-acre expanse of farm fields and forests on the edge of Hopewell Borough.

From 1896 until 1973, the site was the home of St. Michael’s Orphanage and Industrial School, operated by the Catholic Diocese of Trenton. Before the diocese sold the property for development, it offered one last chance for preservation to D&R Greenway – if the organization could raise the funds to purchase the property.

Over $11 million was raised (a large amount of the money came from the State Farmland Preservation Program), and in 2010 D&R Greenway purchased the land, now preserved as open space forever.

“Sharyn and Hannah are special people who have devoted many years to helping us understand and protect local bird life. They work on the front-lines of the battle to save wildlife conservation,” said D&R CEO Mead.

Hannah is particularly known for initiating in 1977 The Featherbed Lane Bird Banding Station Important Bird Area (IBA), a Sourlands-based research and monitoring project, one of the longest-running bird banding stations in the United States.

Known as The Bird Woman of the Sourlands, Hannah, shows no signs of slowing down the pace of her work, even though she is in her late eighties. Her research not only provides invaluable data on the changes in bird populations, but as a licensed avian rehabilitator, Hannah has nursed scores of injured and baby birds to health and released them to the wild.

She has collected her data through “bird misting” – a practice that involves setting up a net on two poles, much like volleyball, to catch and release birds. This allows the ornithologist an up-close look to assess characteristics, including size and health. Hannah has conducted this time-intensive research weekly, throughout most of the year, in the same spot in the Sourlands for 40 years. This provides unique data that can’t be found elsewhere.

Sharyn started working with Hannah “only” two decades ago and has earned renown as a mapper. Sharyn joined the Washington Crossing Audubon Society decades ago and began attending their field trips and assuming leadership roles in the organization.

She got involved with a Cornell sponsored project called, “Birds in a Forested Landscape” and continued its mission even after the funding ran out. Her years of mapping breeding birds has informed her positions on some of the most pressing local matters regarding development and the environment.

I asked Sharyn what I could do to rebuild the bird population– I am not a “bander” – I am pretty sure I never even heard the term until the lecture last Tuesday. For those as uninformed as I am, Bird ringing or bird banding is the attachment of a small, individually numbered metal or plastic tag to the leg or wing of a wild bird to enable individual identification. This helps in keeping track of the movements of the bird and its life history.

Sharyn referred me to recommendations from The Cornell Laboratory of Ornithology:

And I hope that by making some advocacy noise, I can help increase the volume in Central Jersey’s bird land, so the term bird “band” could also apply to the music the birds put forth every day.