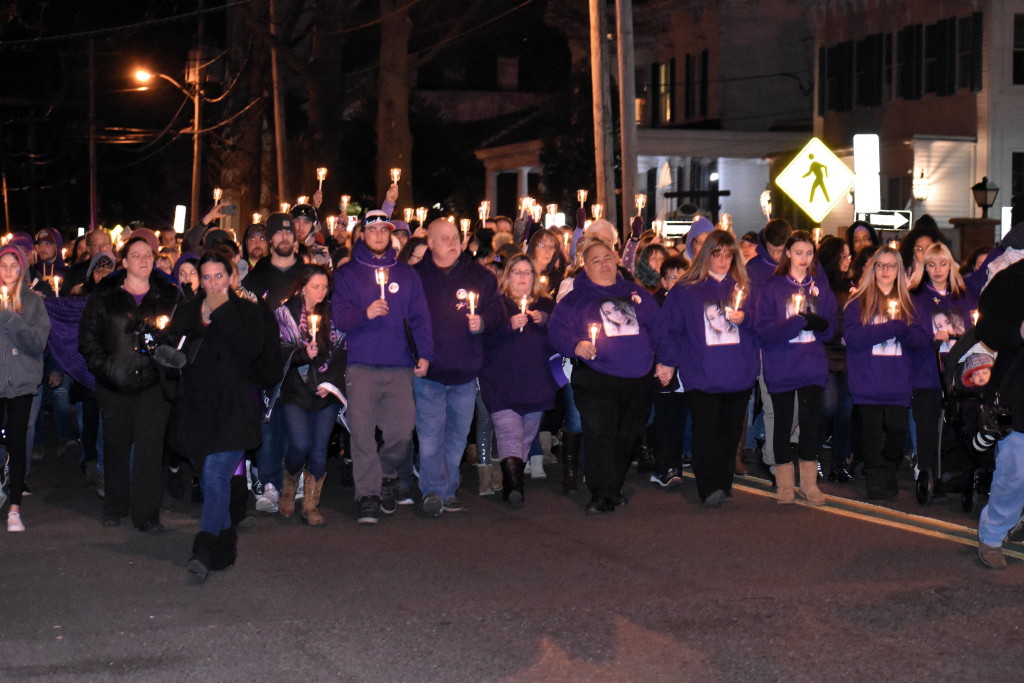 On Feb. 19, the day Stephanie Parze would have turned 26 years old, her friends and family members remembered the young woman’s life during a solemn candlelight walk on Main Street in Freehold Borough.

When the participants reached the plaza in front of the Monmouth County Hall of Records, Stephanie’s parents, Edward and Sharlene Parze of Freehold Township, announced the creation of the Stephanie Nicole Parze Foundation. The foundation will offer support to victims of domestic violence and assist in the search for missing persons.

Stephanie was reported missing on Oct. 31, 2019. Her remains were found off Route 9 south near Old Mill Road in Old Bridge on Jan. 26.

Monmouth County Prosecutor Christopher Gramiccioni subsequently said Stephanie died on or about Oct. 31 and he said a former boyfriend of the young woman was found to be responsible for her death. That young man, who was 29, died by suicide on Nov. 22.

In addition to her parents, Stephanie is survived by her sisters, Brianna, Karissa and Hailey; her nephew, Mason; and her dog, Jasmine.

During the investigation into Stephanie’s disappearance, authorities confirmed she was the victim of domestic violence in her relationship with the young man who was later determined to be responsible for her death.

In comments to the hundreds of people in attendance at the candlelight walk, Ed Parze said they were all celebrating Stephanie’s legacy, which through the foundation, will ultimately assist victims of domestic violence and sexual violence, and aid in the search for missing persons.

During her comments to those who stood quietly at the Hall of Records plaza, Sharlene Parze said her daughter “will always be a piece of our family puzzle that will always be missing. You were my best friend. You brought the community together. … You never deserved this; no one does. Only God knows why.”

In an interview with reporters at the conclusion of the evening, Ed Parze said Stephanie was “a good person, very caring. She would give anyone the clothes off her back.”

Those interested in supporting the nascent foundation may reach out to the Stephanie Nicole Parze Foundation, P.O. Box 6899, Freehold, NJ 07728.

Kane said he has known the family for a long time and in commenting on the support being shown to the Parze family that evening, he said, “This is Freehold.”

Hundreds of people gathered in front of the Freehold Borough municipal building on a cold, but not freezing evening to remember Stephanie. Some of those in attendance wore a button that urged an end to domestic violence.

The participants began walking down West Main Street shortly after 7 p.m. The walkers reached the Hall of Records plaza moments later and the ceremony concluded at about 8:40 p.m. with those assembled singing “Happy Birthday” to Stephanie.

On Feb. 17, two days before Stephanie’s birthday, Ed Parze posted a message on Facebook and wrote, in part, “The why it happened just keeps you up at night. Such a senseless loss of a precious, beautiful life, taken by a devil in disguise.

“… I can see Stephanie’s fight for life in her last moments, yes, I can see it as if I were there. It makes me sick to my stomach. … As the days pass, we get closer and closer to my baby’s birthday. She would have been 26.

“The closer it gets the sadder I get. I don’t know why. I know that so many people will come out to help us celebrate her birthday and her life, and I know she will be with us, but yet it feels like the final chapter of her life story will be concluded.

“I have made a promise to her that for as long as I live, I will not let her death be in vain. I have told my wife, my girls and anyone who will listen that no matter what, I will build her legacy so she will never be forgotten.

“I will dedicate my life to her foundation in the hopes that through her tragedy, others will be helped and saved from her fate. This I promise!

“My baby girl … Daddy will never stop thinking about you. I will make sure everyone keeps you in their hearts and minds forever and ever. Your Angel Army will be doing great things in your name for always,” Parze wrote.

The Jackson Rotary Club, based in Jackson, has announced that all net proceeds from an April 19 bus trip to the Tropicana Casino, Atlantic City, will be donated to the Parze family.

Rotary Club member Tom Barchie said club member Luke Stango has known the Parze family for many years. Barchie said Stango asked his fellow club members if the organization could make a donation to the family and he said it was agreed the Rotarians would do so.

Residents of all communities are welcome to take the trip to Atlantic City on April 19. The cost of $38 per person includes bus transportation, a tip for the driver, a sandwich, beverage and chips on the bus, and $25 back in slot play from the casino. The bus will leave Jackson at noon and return at about 9 p.m.