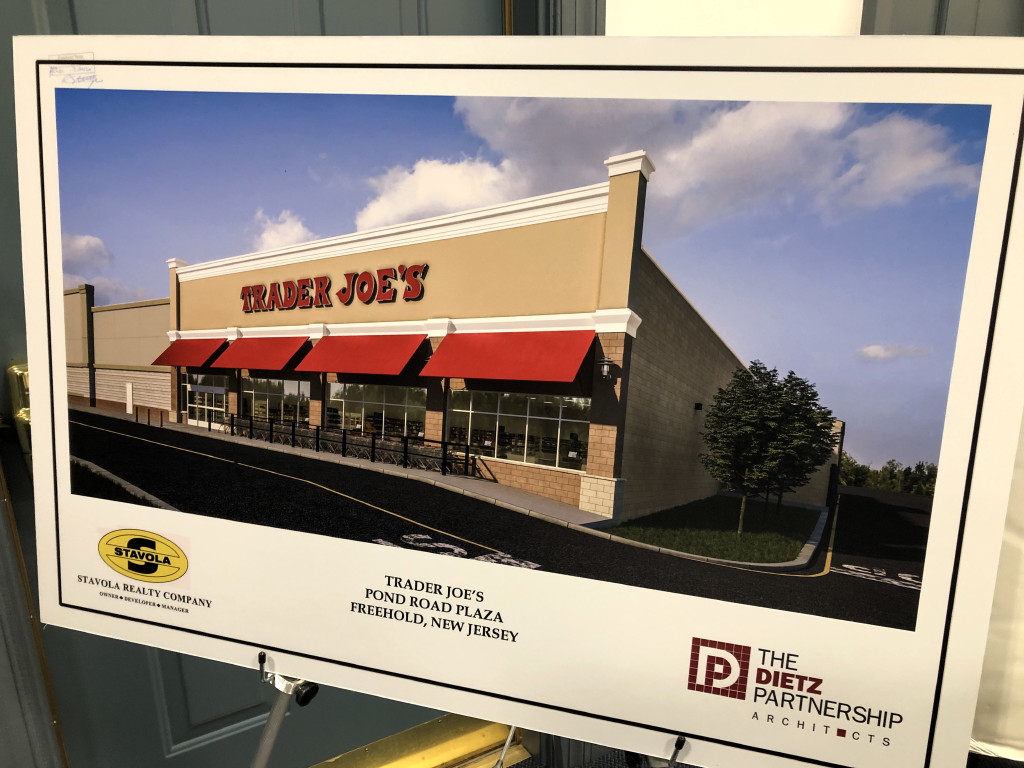 FREEHOLD TOWNSHIP – If all goes well in the planning, permit and construction phases, a Trader Joe’s supermarket could be open by the fall in a space that was previously occupied by a Walgreens pharmacy in the Pond Road shopping center, Freehold Township.

The space on Route 9 north has been vacant for almost five years.

During a meeting on Feb. 20 in Town Hall, members of the Freehold Township Planning Board granted preliminary and final major site plan approval and associated variances to Pond Road Associates LLC, which will lease the space to Trader Joe’s.

Attorney Peter Wolfson, of the firm Day Pitney, represented the application before the board.

Justin Matthews, a regional vice president of operations for Trader Joe’s, identified his employer as the tenant for the former pharmacy. Prior to Matthews’ public confirmation of what was being proposed, the possible tenant had been listed on the application as ABC Grocery.

Matthews described Trader Joe’s as a “neighborhood grocery store.” He said liquor will not be sold at the Freehold Township location. Matthews said Trader Joe’s operates two stores in New Jersey that sell liquor and he said that is the maximum permitted under state law.

Within the Monmouth-Ocean region, Trader Joe’s operates stores in Shrewsbury and in Brick Township.

Matthews testified that the firm performed marketing studies which indicated a Trader Joe’s is needed in Freehold Township. Store hours will be 9 a.m. to 9 p.m. seven days a week. The store is expected to employ between 75 and 85 people who will work in shifts.

Matthews noted the location backs up to a residential area off Pond Road. Regarding deliveries, he said the operator will comply with a Freehold Township regulation which does not permit excessive noise prior to 6 a.m. Delivery trucks will not idle while they are at the location, he said.

The applicant will decrease the impervious surface at the site by approximately 1,500 square feet by adding landscaping.

No member of the public commented on the Trader Joe’s application when given the opportunity to do so.

For several years, local residents have regularly been posting comments on Facebook pages asking Trader Joe’s executives to open a store in the Manalapan-Marlboro-Freehold Township area.

In comments to reporters after the meeting, Matthews said the location in the Pond Road shopping center “is a great spot for us.”

During the hearing, architect Stephanie Moreira of The Dietz Partnership presented a case to support the applicant’s request for a 5-foot-wide awning where a maximum 4-foot-wide awning is permitted.

The wider awning was requested along the storefront where shopping cars would be stored out of the elements and in a safer manner for patrons, Moreira said.

Board members did not object to the applicant’s request for the awning variance and granted it as part of the approval.

Professional planner Golda Speyer of Topology offered testimony and reasons why, in her opinion, the Trader Joe’s supermarket is appropriate at this location.

Speyer said the business would stimulate the economy; replace a vacant space on Route 9; leverage the existing infrastructure with no new construction required; create jobs; is close, but not too close, to a residential zone; and meets a demand for a Trader Joe’s in the area.

Gary Vialonga, representing the shopping center’s landlord, Stavola Realty, discussed the proposed flex warehouse office space at the rear of the parcel. He said the space would not be a self-storage facility, there would not be any manufacturing in the space, the location would not be a distribution center and no hazardous materials would be stored in the space.

Essentlally, Vialonga said, the flex space could be leased by a current tenant in the Pond Road shopping center (i.e., Staples, Party Fair) that needs to store additional materials and/or products.

The board’s planner, Stan Slachetka, did not take issue with the explanation Vialonga provided for the flex space. The potential use of that space will be memorialized in a resolution the board and the applicant’s representatives will agree on for the application’s approval.