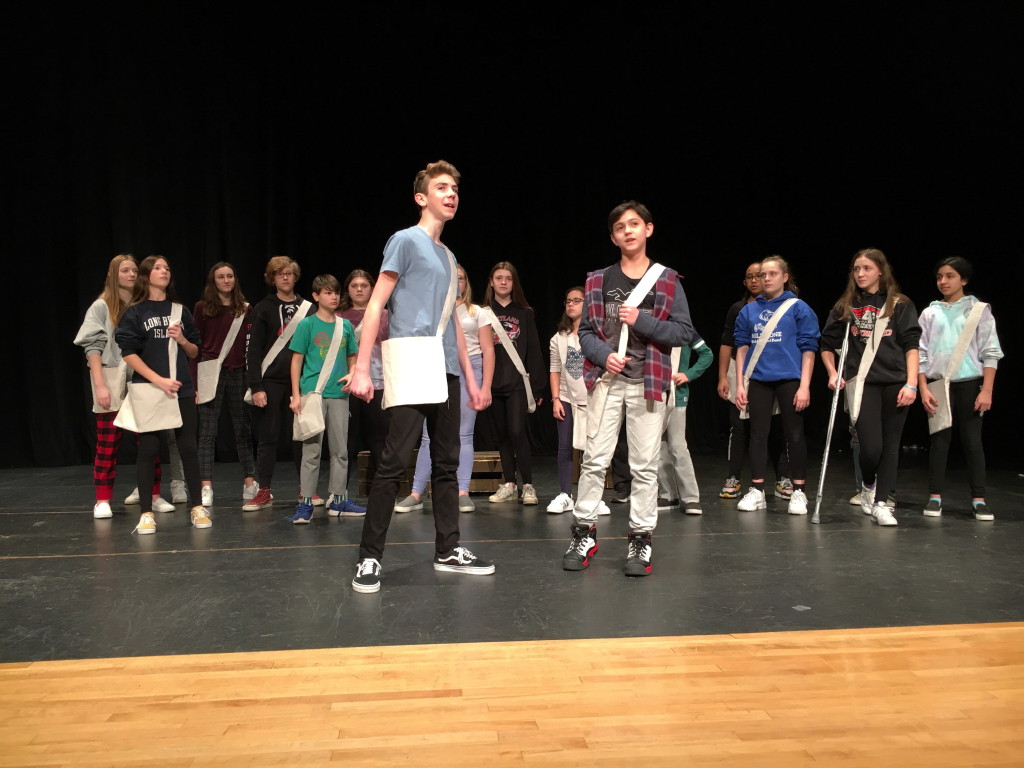 MILLSTONE – Students at the Millstone Township Middle School are preparing for their latest show as they embark on a production of the musical “Newsies.”

Based on the 1992 musical film of the same name about the newsboy strike of 1899, the show will be performed at 7 p.m. March 6-7 at the Millstone Performing Arts Center, 5 Dawson Ct. Tickets may be purchased online through March 5 at $8 for students and seniors, and $9 for adults at mpac.thundertix.com

In the role of Jack Kelly is eighth-grader Brayden Reyes, who sees a contrast between himself and his character.

“Jack is the leader of the newsies,” Brayden said. “He’s confident, popular and he talks a lot. I’m a lot more introverted, but I think playing him has made me less shy. Playing an extroverted character comes through in real life.”

Eighth-grader Sarah Cox considers herself to be different from her character Katherine Plumber.

“Katherine is a writer for a newspaper who is only given the fluffy stuff to write about,” Sarah said. “So she’s out to prove herself and be taken seriously. She’s very sarcastic and I’m like her in that way. But she’s also straightforward and says what she’s thinking. I’m more hesitant than she is. It’s fun to act as her, to be someone else.”

Eighth-grader Hannah Basha also portrays Katherine as an understudy and appears in the show’s newboys ensemble.

“She’s ambitious, but has a sweet side,” Hannah said. “If she was real, I’d get along with her because I agree with her morals. For the newsboys, they are all like brothers. They are close with their friends like I am, but they also bicker and fight a lot. I’m not like that.”

One of the newsboys is eighth-grader Rachel Glantzberg, who plays Finch.

“Finch is always very nervous, but keeps finding himself in the forefront,” Rachel said. “I’m cautious, too, when I learn new things and in the forefront a lot. But he also cares a lot about how he’s perceived. I’m more outgoing and carefree.”

Another one of the newsies is Crutchie, played by seventh-grader Anna DePinho.

“He’s a friendly guy who has never had a family before, so he sees the newsies as his family,” Anna said. “He takes advantage of the bonds he has and loves his friends. That I can relate to … although it’s a little challenging for me to persevere like he does. He never gives up.”

Contrasting with the other newsies is the character Davey, who will be played by eighth-grader Mark Cagnetta.

“Davey is a new kid who, unlike the other newsies, has a home,” Mark said. “He’s more privileged and because he doesn’t fit in, he feels out of place. But he eventually becomes accustomed to the band of newsies. He’s uptight and nervous and I try not to be like that, but sometimes I am. He also becomes more determined, which is a very admirable quality. You can see the changes in him.”

Joining Davey in the newsies is his younger brother Les, played by seventh-grader Lili Relvas.

“Les is outgoing and trying to be the funniest, but he’s never that funny because his jokes are for a young child,” Lili said. “He has a positive attitude. I’m like him because we are both outgoing and people know us, but he’s also younger than me. To play him, I turn my personality up a notch and talk in a higher voice.”

Opposing the newsies is Joseph Pulitzer, with eighth-grader Sal Zerilli taking on the role.

“He’s the head of the newspaper business,” Sal said of Pulitzer. “He’s big, mean and feels like he should get what he wants. He thinks he’s the big guy, the king of the world. I’m not the big, mean guy real life, but it’s fun playing the bad guy. You get to see this other side and see what it’s like.”

In addition to portraying Pulitzer as an understudy, eighth-grader Shane Patel plays Wiesel and the mayor.

“Wiesel is a newspaper distributor who doesn’t like his job, but does it anyway,” Shane said. “He’s pretty grumpy and enjoys the authority he has over the newsies, but he also knows his place. He’s bossy, which isn’t my normal thing to do. The mayor is very corrupt and Pulitzer is in control. He feels like he can do anything because he has the power. Unlike him, I’m definitely not trying to corrupt anyone.”

Eighth-grader Farah Kheder sees many similarities between herself and her character Medda Larkin.

“Medda is a loud personality,” Farah said. “She’s also caring toward Jack, flirtatious and motherly. I also have a big personality, make a lot of hand motions and have big hair. I’m definitely not as flirtatious as she is, but we are both very theatrical and very loud.”

Eighth-grader Gavin Normand is serving as a stage manager for this production of “Newsies.”

“The show is very upbeat at some points and not so upbeat at others,” Gavin said. “It has a story for everyone, with singing, dancing and a nice plot to follow. Everyone can enjoy it.”