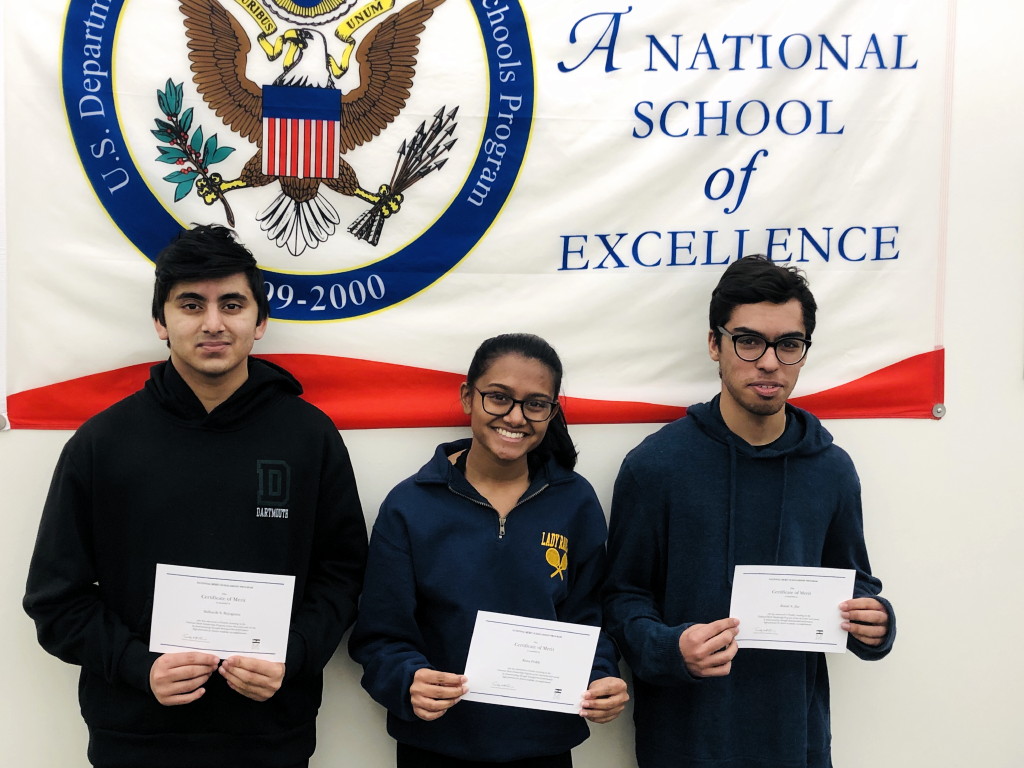 NORTH BRUNSWICK – Three North Brunswick Township High School (NBTHS) students will find out in May if they are National Merit Scholars.

About 34,000 Commended Students placed among the top 5% of more than 1.5 million students who entered the 2020 competition by taking the 2018 Preliminary SAT/National Merit Scholarship Qualifying Test (PSAT/NMSQT). The semifinalists at NBTHS represent the top 16,000 scorers in the same competition; they will now go through the application process to compete for National Merit Scholarships.

He is the captain of the marching band, playing drums. He is on the executive board of Model UN, FBLA and the Math Club.

Outside of school, he is a competing fencer.

He also spent his summers at Columbia University and The Rockefeller University doing research in neurobiology. Spending three months on an independent research project, he was hands-on learning about the genetic basis of spatial orientation and the transcription of RNA sequences.

“It’s very rewarding because you get a taste of what your life may be like in the future,” he said.

Sidharth is also an EMT in Jamesburg, which he said “is a way to give back to the community while doing what I love: learning science.”

She has been captain of the varsity tennis team for two years. She is on the executive board of the MediterrAsian Club and Model UN, and is treasurer of the National Honor Society.

As part of Model UN, she helped coordinate a conference at NBTHS last month for 90 students.

“It brings kids in the community to talk about global issues,” she said.

She is also a dance teacher in the styles of hip hop, contemporary and Bollywood.

In 2019, Rima traveled to India with Uplift Humanity to teach underprivileged and neglected orphans and teens life skills and English.

“I feel for me it really opened my perspective king of poverty … and what children go through at a young age,” she said. “It’s a good feeling to give back and feel we made an impact.”

She said NBTHS offered her many opportunities, and advised her fellow classmates to not limit themselves but instead be goal-oriented.

“Once you limit yourself to a target you neglect other targets around you,” she said.

“I’m glad I can be involved this year … and be more involved with our political climate because the phrase always goes around, if you don’t vote you don’t have the right to complain. … Since my aspirations are to go into politics and government, it’s good to be early and get into that sphere,” he said.

In relation, Kunal is president of Mock Trial and Model UN and is part of the Youth Council. He said he shadowed Mayor Francis “Mac” Womack over the summer. He also said he will go down to federal court in Trenton to observe trials.

Kunal used to be part of the drum line. He also teaches martial arts in South Brunswick; he, himself, is a second degree black belt in TaeKwonDo and is training for his blue belt in Jiu Jitsu.

“The main goal in high school should be learning how to learn, and what learning style helps you the most,” he said. He advised other students to be open to different types of learning and then capitalize on what skills are the best.

Now, to apply as finalists, the three have to submit their SAT scores, a resume and an essay.

Kevin Farrell, director of Guidance at NBTHS, said to have three students out of 1,900 in the high school achieve this honor is impressive.

He said that 1.5 million students take their junior year PSATs on the same day, so to narrow it down to 34,000 students (top 5%) and then 15,000 finalists is significant. With more than 850 public and private high schools in New Jersey, the students should feel “honored” to be in such an esteemed bracket.

“I hope it sends it a message that they’re learning something here and do things inside and outside of the classroom that are giving experiences. … It is a huge honor not just for them but for us,” Farrell said.

The finalists will be acknowledged at NBTHS’s Senior Awards and Academic Recognition evenings.