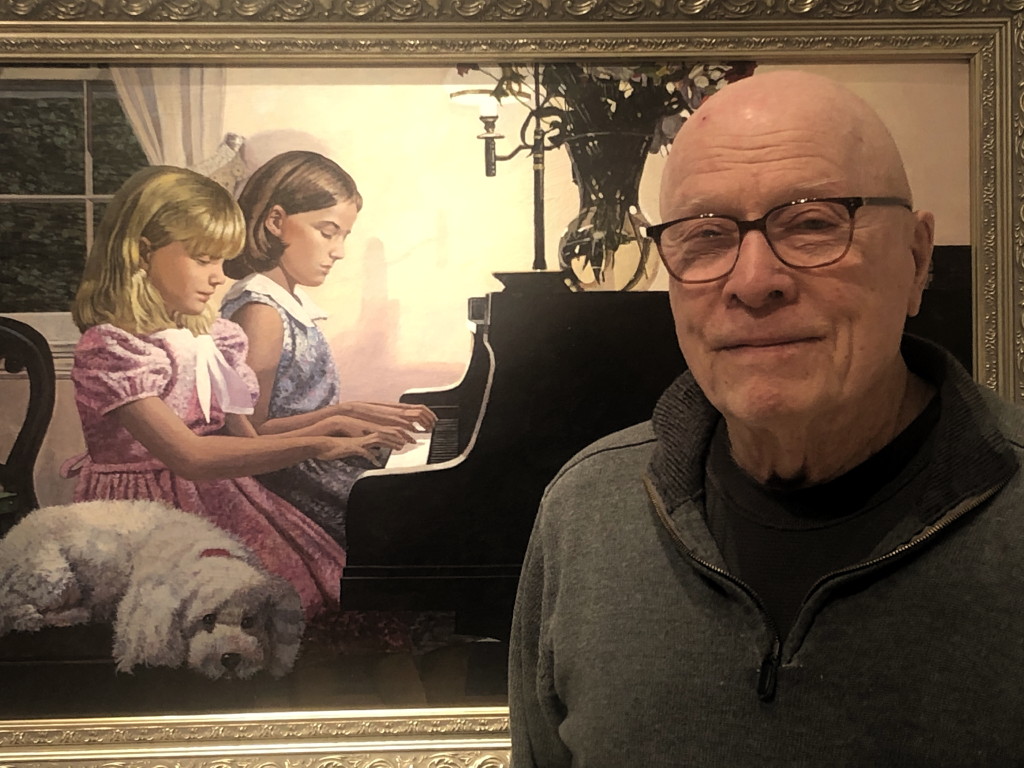 Pictured is 90-year-old Princeton artist Charles McVicker in front of the portrait of granddaughters Emily and Patricia - 20 years ago. This painting is one of 22 now on exhibit at the Arts Council of Princeton through March 14.
×

Pictured is 90-year-old Princeton artist Charles McVicker in front of the portrait of granddaughters Emily and Patricia - 20 years ago. This painting is one of 22 now on exhibit at the Arts Council of Princeton through March 14.

On Saturday, Feb. 29 , I went from interacting with masses of toilet-paper-buying people at Costco (apparently one of the effects of coronavirus panic) to interacting with someone who might find joy in observing and painting these pandemic-preparation shoppers.

“These days, I am really into painting montages of people just doing everyday things, like pushing shopping carts, walking and talking with one another in a plaza, reading newspaper or book, and emailing on their phones. I would like my next project to reflect people eating,” said the renowned 90-year-old Princeton artist Charles McVicker, whose works are currently on display at The Arts Council of Princeton.

Working in watercolors, acrylics, and oils, Mr. McVicker defined himself as a “visual” reporter, whose communications tool is his paintbrush that creates not only images on his canvases, but also at times painted words of poetry. “All I can say is that some images demand words,” said Charles.

The paintings on exhibit share one trait in common – diversity. “You can’t pigeonhole me into one style or technique. I love painting anything that appeals to me – including urban and rural landscapes, portraits, contemporary Bauhaus-style geometric shapes, and the above-mentioned realistic, people doing everyday things,” he said.

He traced his pursuit of diversity in his artistic style to his long career as an illustrator. “Unlike Lucy, my wonderfully talented contemporary artist wife of 66 years, I have no style that can be pinned on me – and I personally like it that way. It is what I loved about being an illustrator, where I took different realistic images and turned them graphic designs.”

His craving for artistic exploration of the new and different developed in the stabile environment of being married for 66 years and living in Princeton for most of those years. Born in Canonsburg, Pa., the home of Perry Cuomo (he used to go to Perry Cuomo’s father’s barber shop), he always was drawn to drawing.

“In high school, I determined that I really wanted to be a cartoonist for The New Yorker…. After bombarding the publication with countless submissions, I managed to sell just one cartoon to the magazine – but that was it,” said Charles.

He attended a small liberal arts college Principia College in Illinois, where he met Lucy. “We had two failed dates in college. I graduated, was drafted (during the Korean War) and stationed at Fort Knox. On a weekend leave, I went to Chicago with friends, who knew that Lucy also was in Chicago taking business and secretarial courses. My friends said they could fix me up on a blind date or I could reconnect with Lucy. I flipped a coin- and it came up Lucy. And here we are nearly seven decades later.”

When he finished his tour of duty, he attended the LA Arts College of Design and began his career as an illustrator. With job opportunities of freelance illustrating in New York City, Charles, Lucy, and their first child landed in Princeton, where his mother-in-law Josephine Graves lived. In 1957, the couple lived in a half house on Jefferson Road and paid a rent of 98 dollars per month.

The illustration profession, however, died a few decades later, because of the advances in computer technology, a development that propelled him into fine arts painting as a profession.

While teaching at The College of New Jersey (TCNJ) for 18 years, he gained fame as a portrait, landscape, and historic building artist. He painted the official portrait of former TCNJ President Barbara Gitenstein and also painted her retirement gift – a picture of the TCNJ Library, considered to be a major accomplish of President Gitenstein’s tenure.

After attending Dr. Gitenstein’s retirement dinner, Dr. George Prutt, the former President of Thomas Edison State University (TESU), was so taken with the library image that he asked Charles to do a portrait of TESU’s new academic building that bears his name..

Other campus building paintings for which Charles is famous are located at “the other” College of New Jersey Campus – now known as Princeton University. He painted Nassau Hall, the Graduate College, Blair Arch and the steps from Washington Road to the campus. Princeton University owns all of the original paintings.

“We lived right in the middle of town in the 1980s. I was able to observe the campus in all seasons and at all times of the day and night. It was inspiring,” he said.

Charles himself is inspiring to Princeton’s community of artists. Neither his age nor his health (he had triple bypass heart surgery several years ago) has altered his lifestyle habits that include working out at the gym on a regular basis and painting for several hours everyday. In addition, he is very committed to maintaining the vibrancy of Princeton’s arts community. Twenty-five years ago, he was one of the founding members of the Princeton Artists Alliance, and has been active in several New Jersey arts organizations, including serving as president of the Garden State Watercolor Society.

None of Charles and Lucy’s three children is an artist, even though all of them love the art. One of the pictures in the exhibit actually belongs to his oldest daughter, who told her father she would outbid anyone who makes an offer on “her” painting. Charles said the family never suffered tension, because of having two artists under the same roof. “Lucy’s and my artwork are not competitive – we differ in style and work goals. We complement one another. Furthermore, we share a sense of humor,” he said.

And that fact bodes well for the possibility of Charles’ next people montage actually might be one that reflects shoppers – and diners – at Costco with overstuffed shopping carts and overstuffed mouths of hotdogs and pizza!

Arts Council of Princeton presents “McVicker at 90: A Retrospective,” an exhibition of works by award-winning Princeton artist Charles McVicker. The exhibit will be on display in the Arts Council’s Taplin Gallery, through March 14, 2020. The 22 paintings on display span the entire length of his career and reflect all of his different styles.