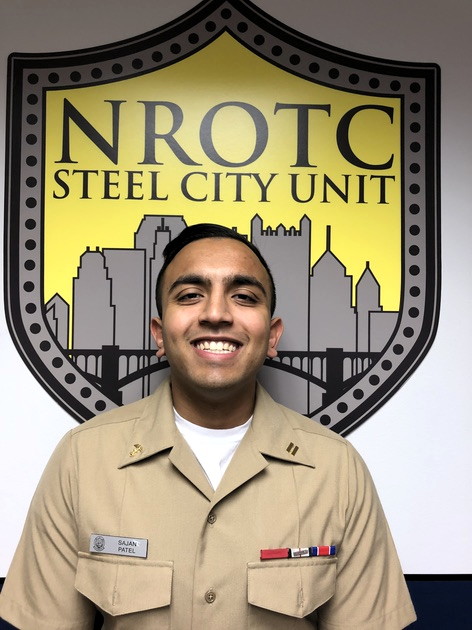 More than 270 midshipmen from NROTC units around the country chose to serve as surface warfare officers. Each selecting midshipmen are ranked according to their grade point average, aptitude scores and physical fitness, according to information provided by the Navy Office of Community Outreach.

“The NROTC program has helped me develop into a better leader, communicator, as well as a more disciplined student,” Patel said in the statement. “The program has taught me a lot about balancing multiple responsibilities at once, and how to both develop yourself while leading others towards accomplishing a goal or mission.”

According to their rankings, each midshipman provided a preference of ship or homeport to the junior officer detailer at the Navy Personnel Command in Millington, Tennessee. If these preferences were available, they were assigned as requested.

“I’m most looking forward to having a strong command that is willing to help me learn, as well as push me to become a better naval officer,” Patel said in the statement. “I look forward to meeting my fellow officers and enlisted personnel and helping them continue the ship’s mission of accomplishing any task it is given.”

Patel, a 2016 South Brunswick High School graduate, has selected to serve aboard USS Jason Dunham. Patel is majoring in information sciences and international relations while attending University of Pittsburgh. Upon graduation, Patel will receive a commission as a Navy Ensign and report aboard Jason Dunham as a surface warfare officer.

Jason Dunham is a guided missile destroyer capable of completing diverse missions such as anti-air and anti-submarine warfare. The ship is currently homeported in Norfolk, Virginia, according to the statement.

“Some personal traits I can bring to the ship are that I am a compassionate, humorous guy who is friendly with everyone and looks to make great relations with people of all backgrounds,” Patel said in the statement. “Leadership wise, I am caring and considerate of my people and try to serve in their best interests in order to create a better command climate. I hope to bring new traits to the ship and help my fellow sailors out, as well as learn something new about myself to improve my own traits along the way.”With more than 90% of all trade traveling by sea, and 95% of the world’s international phone and internet traffic carried through fiber optic cables lying on the ocean floor, Navy officials continue to emphasize that the prosperity and security of the United States is directly linked to a strong and ready Navy, according to the statement.

The midshipmen’s ship selection is not only a major personal milestone but also an important day for the ships in the fleet. Not only do the midshipmen choose where they are going to start their Navy career, but the ship they choose will also gain a motivated, eager, young officer to help lead and improve an already great team, according to Navy officials.

“NROTC prepares our future SWO with a foundation in leadership and ethics as well as basic training in five warfighting competencies; firefighting, damage control, seamanship, watchstanding, and small arms handling and marksmanship, all essential skills on a ship,” Rear Admiral Jamie Sands, commander, Naval Service Training Command, which includes the NROTC Program, said in the statement. “I am enormously proud of our graduating midshipmen for completing this demanding program, and look forward to them joining the fleet.”

As a member of the U.S. Navy, Patel, as well as others at the command, know they are a part of a service tradition providing unforgettable experiences through leadership development, world affairs and humanitarian assistance. Their efforts will have a lasting effect around the globe and for generations of sailors who will follow, according to the statement.

“The ship selection process means a lot to me because it is a culmination of all the hard work we have put in these last three and half years,” Patel said in the statement. “It is an honorable experience to be able to select our ship. The variety of ship types and locations gives freedom in picking a ship based on individual midshipmen’s desires in where and how they want to serve.”

Ask contractors for specific information before hiring; be wary of potential scams