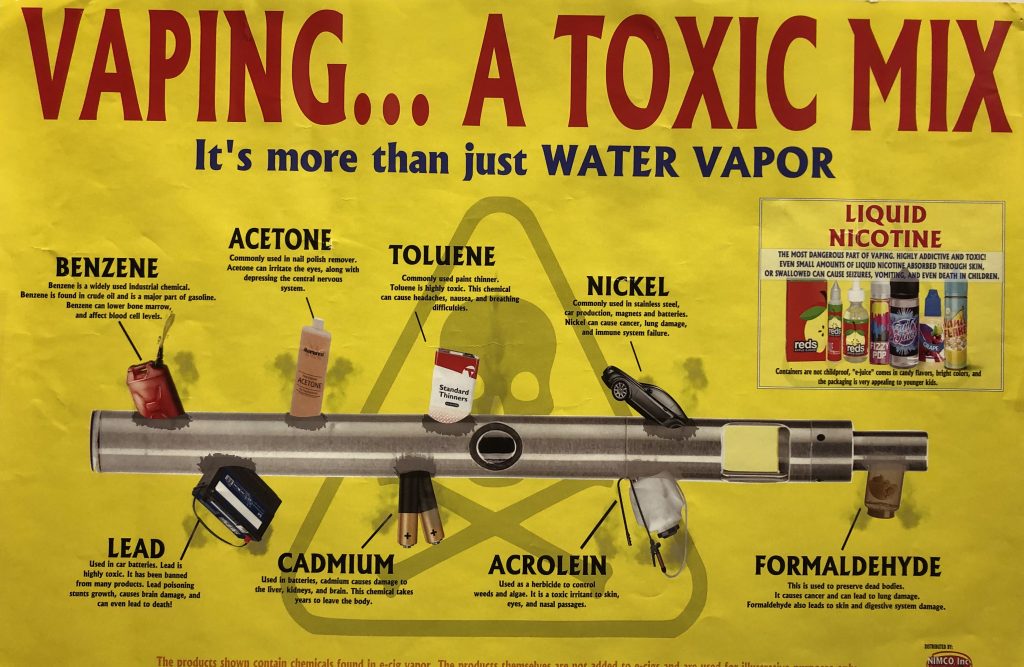 A school community wants to make certain that students and their parents are aware of the severe health problems medical professionals have said could arise from the “pop-culture phenomenon” of vaping electronic cigarettes.

Vaping is the inhaling and exhaling of an aerosol, which is often referred to as vapor, and is produced by an electronic (e-cigarette) or similar device.

“I wouldn’t say (vaping) is a problem at the middle school, but vaping is a phenomenon that didn’t exist two years ago,” said Christine McCoid, principal at the Hazlet Middle School.

“We had to put information in our code of conduct to say that (vaping) is not allowable for students after we noticed vaping was now a thing,” McCoid said.

On March 4, Patricia Hessinger, a registered nurse from Hackensack Meridian Health, delivered a “Don’t Get Vaped In” presentation at Raritan High School in Hazlet.

According to hackensackmeridianhealth.org, more than 50 nurses are available to deliver the “Don’t Get Vaped In” curriculum. This program, which was developed by Tobacco Free for a Healthy NJ, teaches students and their parents about the dangers of vaping.

McCoid, who said an individual must be 21 or older to purchase e-cigarettes, said youngsters can easily buy the devices online. She said some vendors specifically market the devices to children.

“At the middle school level, there have been a handful of kids who have been caught (vaping) and have had consequences imposed. Just seeing what (youngsters) are posting on social media and what (they) are saying (their peers) are doing outside of school … we could tell (vaping) was (a problem),” McCoid said.

McCoid said parents in the Hazlet school district thought “things were happening faster than they could keep up with” and wanted to know more about the side effects of vaping e-cigarettes.

Hessinger, who said children and teenagers are enticed to use flavored e-cigarettes, said the devices are made to “look cool in advertisements” and said the young people want to emanate that trend.

According to njbiz.com, New Jersey was the first state in the nation to ban flavored vaping products.

Hessinger said e-cigarette users are not inhaling a vapor. She said users are breathing in an aerosol that is laced with what she described as dangerous chemicals.

“When you are inhaling liquid nicotine, (the product) cases itself against the wall of the lungs and they start to deteriorate the lining of the lungs,” Hessinger said.

She said chemicals such as formaldehyde, which is an embalming fluid, and glycol, which is an ingredient found in antifreeze that causes cancer, could be found in e-cigarettes.

Hessinger said some e-cigarettes contain diacetyl, which is a chemical that has been used to give butter-like and other flavors to food products. Diacetyl is safe to ingest, but dangerous to inhale, Hessinger said.

Vaping e-cigarettes is not a safe alternative to smoking cigarettes, Hessinger said.

Hessinger said changes in mood, nose bleeds and pimples around an individual’s mouth may be indicators a student is using e-cigarettes.