MARLBORO – A new building is on the horizon for Marlboro Fire District No. 3 following a courtesy review of plans for the facility by the Marlboro Planning Board.

Board members signed off on the project during a meeting on March 4. A representative of Fire District No. 3 said the fire district taxes that property owners pay will not increase as a result of the project.

Fire District No. 3 serves northern Marlboro. The area encompasses portions of Route 79 from Wyncrest Road to the Aberdeen Township border, and portions of Texas Road, Route 520 and Conover Road.

The application that came before the Planning Board was for property on Route 79, north of Brown Road. The 5.5-acre site includes the Morganville Fire Company firehouse at 393 Route 79. The fire district’s plans call for the construction of a 4,800-square-foot building with bays for fire trucks.

Ian Thompson, chairman of the Fire District No. 3 Board of Fire Commissioners, said the new building will not contain a members room, bathrooms, a repair room, a training room or a meeting room.

Regarding how the new 4,800-square-foot building will be paid for, Thompson said, “A few years ago we received voter approval for a steel building. We then had a surplus from other projects that are now completed and the surplus has been reallocated to this project. There is no loan and/or bonding or any increase to taxes to fund the project. It is being paid for with cash we have saved over the years.”

Thompson said a bid package will be prepared and the project to construct the 4,800-square-foot building will be advertised. He said the fire commissioners hope to have the new building operational during the summer. 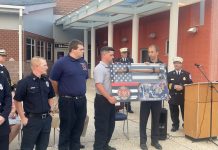