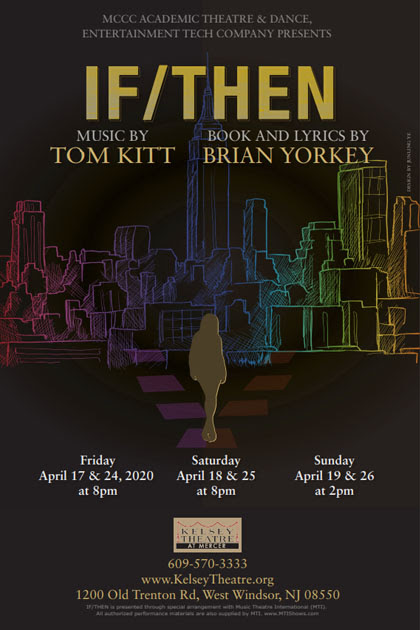 If/Then musical is scheduled to run at Kelsey Theatre in West Windsor Township from April 17-26.PHOTO COURTESY OF KELSEY THEATRE
×

If/Then musical is scheduled to run at Kelsey Theatre in West Windsor Township from April 17-26.PHOTO COURTESY OF KELSEY THEATRE

Kelsey Theatre and the Mercer County Community College Academic Theatre and Dance Company are presenting the musical production of If/Then in April.

As of now, the musical is scheduled to run at Kelsey Theatre on the college’s campus in West Windsor Township from April 17-26. The first set of dates is from April 17-19, with final performances to be from April 24-26.

According to Kelsey Theatre officials, If/Then tells the story of Elizabeth, a newly divorced woman who has courageously moved to New York to restart her life in a city of infinite possibilities.

When her carefully designed plans collide with the whims of fate, Elizabeth’s life splits into two parallel storylines.

In one, she is “Liz,” a woman who seeks new experiences, and in the other she is “Beth,” a woman focused on her career. This ambitious and inventive show simultaneously follows one woman’s two possible life paths, painting a deeply moving portrait of the lives that we lead, as well as the lives that we might have led.

Officials added that the musical was nominated for two Tony Awards, including best original score.

This musical will have music by Tom Kitt, with book and lyrics by Brian Yorkey. The production is set to be directed by Robert Terrano.

According to officials, Kitt received the 2010 Pulitzer Prize for Drama as well as two Tony Awards for Best Score and Best Orchestrations for Next to Normal.

Kitt’s upcoming projects include musical adaptations of the films Almost Famous, Magic Mike, and The Visitor.

Officials added that Yorkey received the 2010 Pulitzer Prize for Drama, as well as the 2009 Tony Award for Best Score, for Next to Normal. He is currently the executive producer and showrunner of 13 Reasons Why for Netflix, Paramount Television and Anonymous Content.

His current theatrical projects in development include the original musical Jesus in My Bedroom, with composer Tim Symons, as well as stage musical adaptation of Magic Mike.

For more information about the musical If/Then at the Kelsey Theatre, visit www.kelsey.mccc.edu.