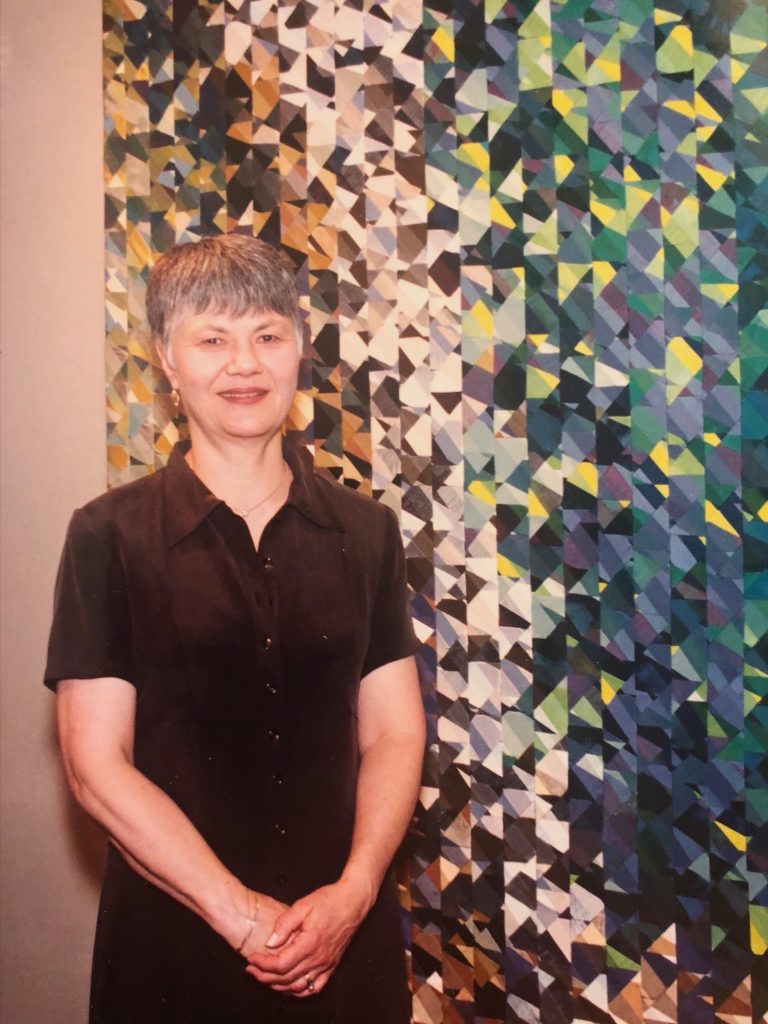 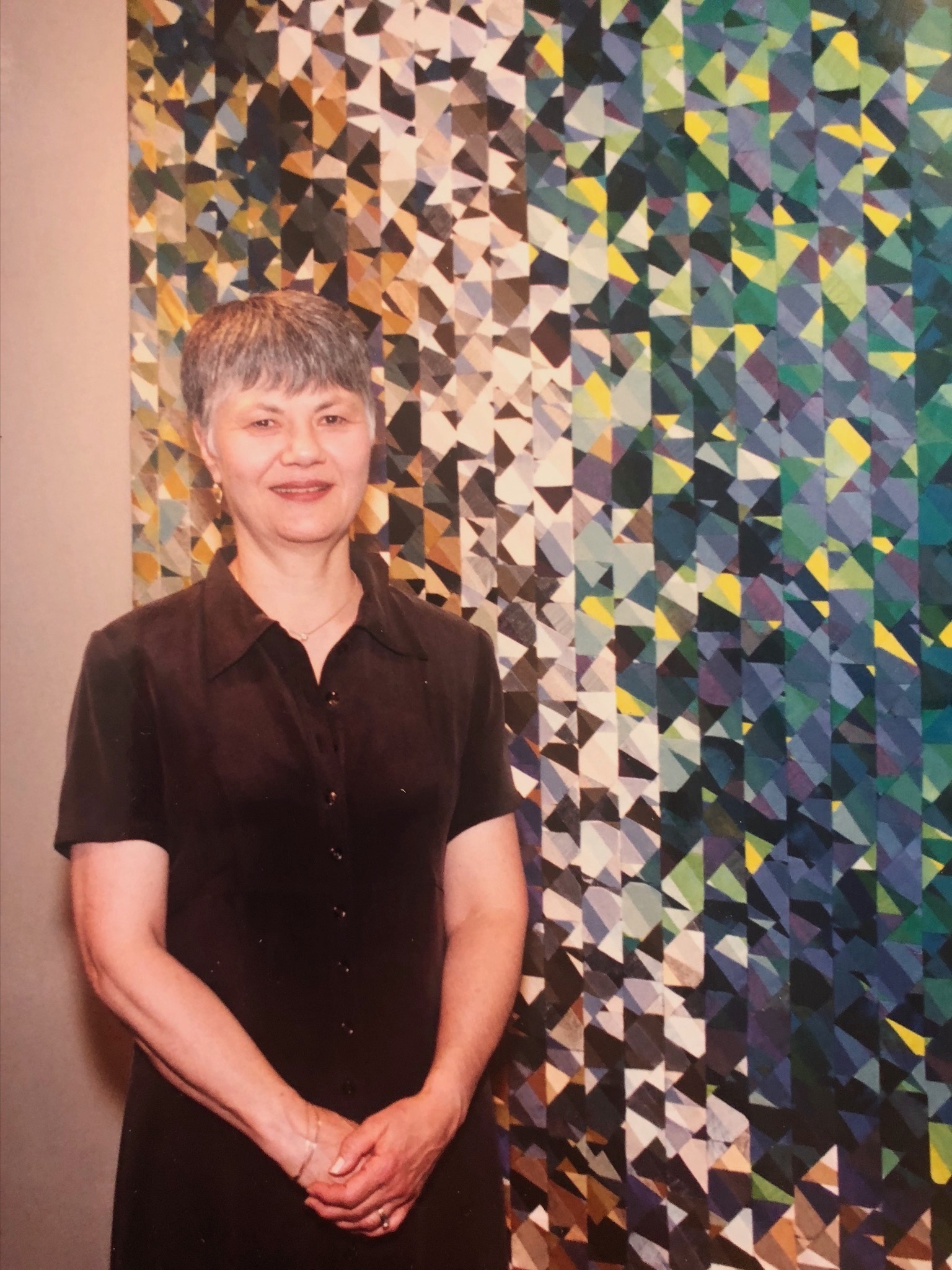 Though she trained as a nurse at Lincoln General Hospital in the 1950s, it was through fine art and textiles that she found her life’s true expression beginning in the early 1970s. Joy produced a body of work comprising dozens of abstract expressionist textile art works with roots in quilting and the patterns and techniques of Seminole patchwork. Her art was the subject of many solo and group exhibitions around the world, and pieces can be seen in the permanent collections of the International Quilt Study Center & Museum in Lincoln, Nebraska; the American Craft Museum in New York; and The Newark Museum in Newark, New Jersey; among other private personal and corporate collections.

Joy began creating textile art in the early 1970s when she left her nursing career after deciding not to return to school to become a doctor. As a young girl, she had watched her mother sew all of her children’s clothes. Her mother used to make suits for Joy and Joy’s sister, Janice, by using a suit their brothers had outgrown, transferring the buttons to the left side, and using the trousers to make a skirt. Joy made her first dress at age seven and a half. In 1975, after attending a workshop on Seminole patchwork, Joy began sewing and piecing fabric together. Years later, she recounted a moment of great inspiration: “I was working in my studio one day trying to decide what I could do with this technique and my young daughter, Andrea, suggested ‘Why don’t you just keep cutting it up?’” This brought a new discovery and dimension to Joy’s work. She developed her own creative system of color and pattern which became her trademark.

Joy’s work embodied her attempts, as noted in the book Contemporary Quilt Art by Kate Lenkowsky, “to capture and convey abstractly and through color the sensations evoked by encounters with nature. The surfaces are from a multitude of tiny patches of silk, cotton, and linen that ‘shimmer like brushstrokes in an Impressionist painting.’ ” In 2013, she wrote that “My work expresses feelings of connection, interaction, and recognition that happen in the moments when time stands still, moments that often occur when I am focused on my work; I am centered, but very much aware, as if in meditation. The energy of this stillness encircles me. It is this contradiction between the quietness of the moment and my awareness of the change implied by the existence of the moment, that fuels the creation of the work.”

Joy was a dedicated member of NOHO Gallery in Manhattan, Friends of Fiber Art International, Surface Design Association, and the Textile Study Group of New York. She enjoyed the rewards and challenges of a robust cohort of visual artists, with whom she enjoyed great friendship and camaraderie. In addition to making art, she enjoyed teaching creative processes and her craft.

Joy was the youngest of five children, Junior Donald (1928-2011), Robert Dale “Bob” (1930-2011), Janice Margery Ann (b. 1931), and Roland Gene (1933-2018). Joy’s parents owned one of two grocery stores in town. In 1943, the Wagner family moved to Lincoln where Ben began work with Gamble and Robinson, a fruit and vegetable company. Joy attended primary through high school in Lincoln. She was very involved in music, was the Lincoln High School drum majorette and sang in the Lincoln High School Women’s Octet. Joy attended the University of Nebraska for one year and then went to nursing school at Lincoln General Hospital where she graduated in 1957. She was a member of Alpha Chi Omega.  Joy remained lifelong friends with her childhood neighbors, school friends, and nursing school friends.

Joy met Dudley Albert Saville (1933–2006) in 1958. They were married March 7, 1959, in Lincoln, Nebraska, and moved to California where Dudley worked for Standard Oil Company, then to Ann Arbor, Michigan, where their first child, Dudley Alexander (Alex) was born in 1964. At this time, Joy was an assistant head nurse in the adolescent psychiatric ward at the University of Michigan Hospital. They returned to California in 1965, where their second child, Andrea Louise, was born in 1967 in San Rafael. In 1968, Dudley was hired by Princeton University to teach in the Department of Chemical Engineering. Joy worked as a registered nurse at the Princeton Medical Center in the coronary care unit until she began working as an artist. She was a devoted member of Nassau Presbyterian Church in Princeton, where she found a spiritual community and an extended family that nurtured her throughout her life.

Joy was predeceased by her husband of 47 years, Dudley, and her brothers Don Wagner, Bob Wagner, and Roland Wagner. She is survived by her son and daughter-in-law, Alex and Amy Saville, of Highland Park, New Jersey; and their sons, Liam and Graham; her daughter and son-in-law, Andrea and Stephen White, of Great Barrington, Massachusetts, and their son, Aidan; her sister, Janice West of Centerville, Ohio.; her sister-in-law and brother-in-law, Harriet and Thomas Potter of Lincoln, Nebraska; and many loved nieces and nephews.