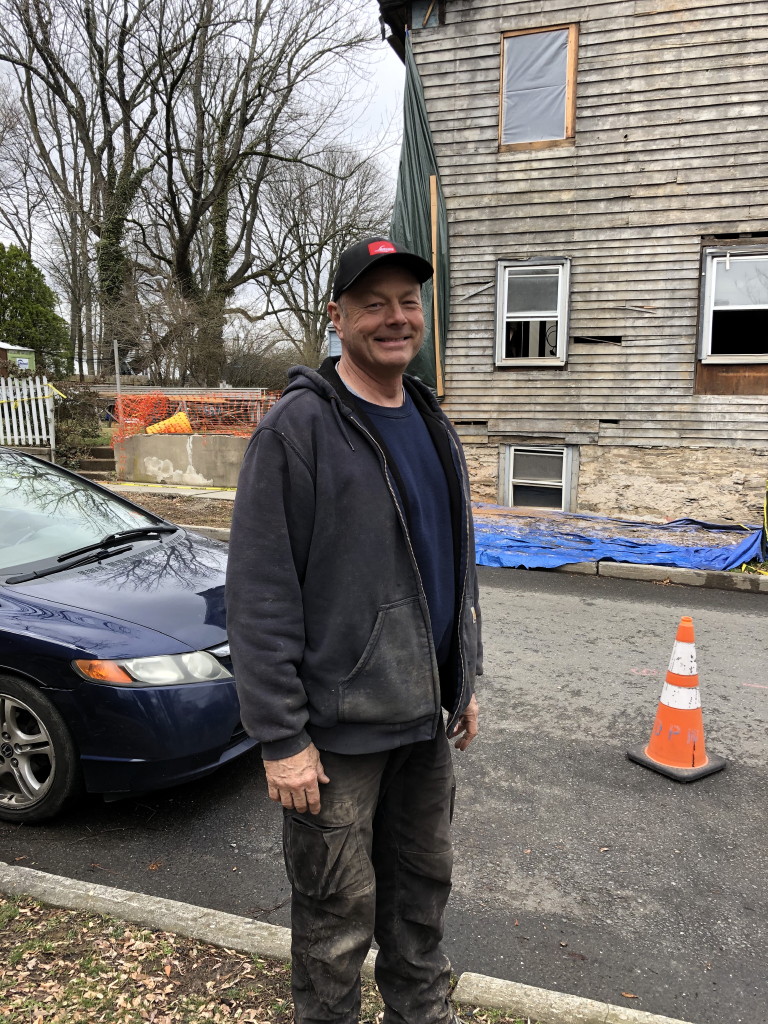 As COVID-19 was halting all activity in Princeton, architect Kevin Wilkes was doing his best to ramp it up. The construction activity – permitted under current COVID restrictions and socially distant from residents – was focused on a house at the corner of Witherspoon and Green streets. Construction workers were wearing masks to block not the virus but rather the toxic dust of demolition waste from the Paul Robeson House, the residential property located at 110 Witherspoon St., Princeton.

Paul Robeson, the internationally renowned actor, singer and civil rights and social justice activist, and Rutgers University star football player and scholar (Class of 1919), was born in the house on April 9, 1898.

Kevin was the only person I spoke to last week who was celebrating the future, rather than moaning about the present. The longtime Princeton resident, former Princeton Borough councilman and owner of Princeton Design Guild, a design-build firm, was celebrating actual physical progress on the Robeson structure after 15 years of hoping, dreaming and planning for the rehabilitation of the historic home.

The house, on the state and national historic registers, came with Paul Robeson’s father’s job. The Rev. William Robeson, who at 15 escaped slavery on a North Carolina plantation, served as minister of the Witherspoon Street Presbyterian Church a few doors down from the Robeson home.

Because he spoke up about civil rights issues, William Robeson was ousted from the church, and the family had to vacate the house. They moved further down Green Street, where Paul’s mother died in a kitchen fire, and then the family settled in Somerville.

The church fell on hard times and had to sell the property. It became a boarding house for day laborers and, at one time, there was a barbershop on the lower floor of the Robeson house and a lounge where workers from Princeton University’s eating clubs would gather. In 2005 the church bought the property back from a parishioner. The New Brunswick Presbytery, responsible for ousting Rev. William Robeson, apologized and, as a gesture of recompense for what it termed “ecclesiastical lynching,” retired the mortgage.

With a mission of restoring the house, The Robeson House Committee was formed in 2007 and led to the founding of the Paul Robeson House of Princeton as a 501c3 organization. Plans call for a public/community center meeting room accommodating 50 to 60 people, gallery space for historic exhibits about the neighborhood and church, one three-bedroom apartment, and a couple of small offices for non-profit enterprises.

Kevin, with an undergraduate degree from Princeton and graduate degree from Yale, did all the design work and advised on the complex government approvals process (zoning, historic, municipal) on a pro bono basis. His firm is getting compensated for the construction – but just enough to cover the labor costs, not to generate a profit. Two other civic-minded individuals – land use and real estate attorney Dan Haggerty and civil engineer Wayne Ingram – also donated considerable hours to obtaining the final governmental approvals to proceed with the project.

The Robeson House was neglected, unappreciated and scrubbed from history in the mid 20th century. This restoration helps compensate for that erasure, Kevin said. “After 35 years of working in the Princeton community, I believe this will be my most significant project (private or public). …. I have a passion for this project, and need to see its completion,” he said.

I have known Kevin for most of the 35 years he has been in town and have written about all of his pubic art projects (Quark Park, Writers’ Block, Dohm Alley, Princeton (Borough) Battle Monument Park.) He displayed ingenuity, creativity, design skills and an abundance of energy and hard work on all of them.

In addition to the above qualities, however, Kevin is bringing something a little extra to the Robeson project – an intensity of passion and commitment that I never had witnessed previously. So I had to pose the logical question to him—Why?

Why is a Princeton architect who hails from a white upper class family, with degrees from Ivy League schools, with a Southern birthright (he was born in Smyra, Georgia, before coming as a toddler to New York City) so committed to this project honoring Paul Robeson?

The answer is simply Mama Bea, the black caregiver who raised Kevin, loved him and instilled in him the ethical and racial moral compass that has guided him his entire life.

“I am a child of the South. … Even though my father’s work brought us to Manhattan when I was two years old, my family retained the essence of a privileged white family from the Deep South. My mother was raised by a nlack woman, Beatrice Thomas, the same caregiver who raised me. Essentially, she worked for our family for 60 years.

“When my family moved to Manhattan, Mama Bea’s family was in Harlem, and I was a regular in her neighborhood. She loved me and gave me certain values that enabled me to see so clearly the evils and injustice and prevalence of racism in my own family and all across America. Mama Bea stopped working when I entered Princeton University (Kevin is PU Class of 1983). And it was my good fortune that soon afterwards, she and her daughter moved from Harlem to East Windsor. Mama Bea died at Princeton Hospital in 1986. She raised me with dignity, faith, morals, empathy, pride, humor – all of which enabled me to reject the racist demagoguery. This project is for her and the historical significance and social justice conscience of the Witherspoon-Jackson neighborhood.”

I am among the many residents of Princeton who would like to thank Mama Bea for guiding and overseeing the development of a human being determined to help cure the destructive racism infecting our society.