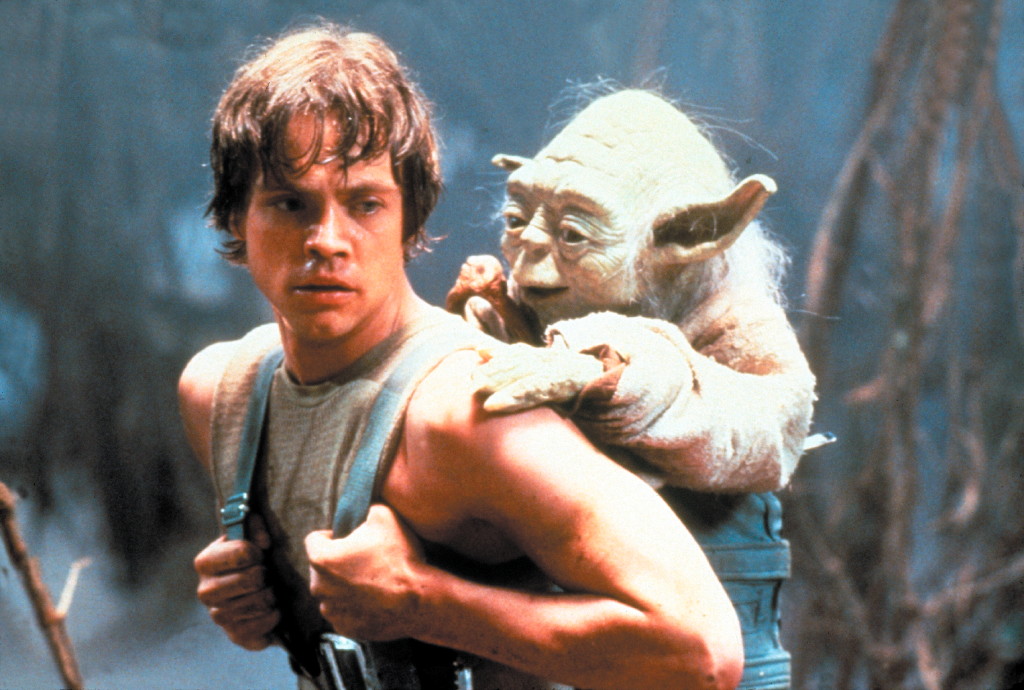 From serious to silly to a timeless classic, 1980 left us with these unforgettable films.

We all have them. That friend who will quote every movie line they know hoping it resonates at the perfect moment. They’ll interupt your conversation with “Here’s Johnny” – Jack Nicholson in The Shining. Establish their authority with “I am your father” – James Earl Jones in The Empire Strikes Back. And if you utter “Surely you can’t be serious,” they’ll respond with “I am serious and don’t call me Shirley.” – Leslie Nielsen in Airplane!
Amid the serious moments, action sequences and laughs of 1980’s most memorable movies came some of our favorite lines and so much more.

From “Empire” To Eerie
In 1980 George Lucas followed up Star Wars, the biggest-grossing motion picture of the time, with a darker The Empire Strikes Back. The film shocked fans with Han Solo frozen in carbonite, and Luke Skywalker losing a hand and gaining some serious insight into his familial history from Darth Vader. Many still claim Empire is the best film in the franchise.

This was the year Stanley Kubrick finally released his shivery, brilliant The Shining after an insanely long year of shooting. Fans of the Stephen King novel and fans of the Kubrick movie have argued for decades which was scarier, though both scored big. (Many of the differences between the two would be reconciled in the movie adaptation of King’s Doctor Sleep, released at the end of 2019.) Then Martin Scorsese put out Raging Bull, its moods almost as dark as its stark black-and-white photography. Robert De Niro’s startling transformation showed this was a movie willing to shock.

Risky material definitely ruled. Everything was controversial about Paul Schrader’s American Gigolo – its title, its subject matter and its full-frontal nudity. But it still sold tickets and made Richard Gere a star.

But Then Came The Laughs
The year wasn’t just about the grim and the grimy, though. Caddyshack paired two former Saturday Night Live stars in Bill Murray and Chevy Chase alongside industry veteran Ted Knight and comedian Rodney Dangerfield. The group of comedic gems worked under director Harold Ramis to lay waste to a snobby golf course and taught many teen boys a solid prank with Baby Ruth chocolate bars. Every golf outing since its release has had a different flavor thanks to Caddyshack. Refusing to be outdone, two of their old SNL colleagues, John Belushi and Dan Aykroyd, devastated much of Chicago as Jake and Elwood Blues in The Blues Brothers, a film that remains a cult classic today. Less pointed but twice as silly was Airplane! Written and directed by Jim Abrahams, David Zucker and Jerry Zucker, it was a gleefully goofy grab bag of disaster flick clichés and surprise guest stars.

The year 1980 also presented us with some serious comedies, many of them slipping in meaningful messages amid the slapstick.

Like Private Benjamin, in which a spoiled young woman (Goldie Hawn) finds not only a new life in the Army, but also a new place in the world as a proudly single, self-sufficient woman. Or 9 to 5, in which three exploited women (Jane Fonda, Lily Tomlin and Dolly Parton) not only get revenge on a sexist boss (Dabney Coleman), but also rewrite the corporate culture, instituting flextime, day care and equal pay. Both movies were major hits at the time.

And Along Came The Magic
Then in early August we were introduced to that zany, roller skating disco musical Xanadu starring the lovable Olivia Newton-John, who was still hot off Grease. While the film’s soundtrack featured some major hits with “Magic” and “Xanadu,” plus the dreamy sound of Electric Light Orchestra, the film didn’t fare too well at the box office. Today, the film remains a cult favorite and is credited for being the last motion picture in which Gene Kelly starred.

The sweetest hit of 1980 doesn’t even try. Instead, Somewhere in Time goes back – all the way back to 1912, as Christopher Reeve’s modern romantic travels back in search of a woman (Jane Seymour) he fell in love with from an old photograph. And how does he do it? Not through some special-effect time warp, or black hole, or even a brand-new shiny machine. He does just through the purity of his own passion, and the force of his own imagination.