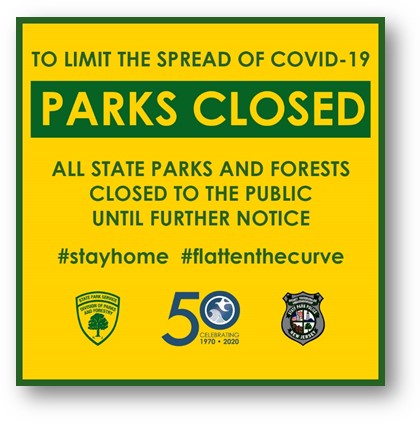 To limit the spread of COVID-19 and to ensure social distancing, the New Jersey Department of Environmental Protection (DEP) has closed all state parks and forests following the signing of an Executive Order by Gov. Phil Murphy.

The closure of the parks took effect on April 8. The order also closes county parks throughout the Garden State.

“My administration’s top priority is to flatten the curve of new COVID-19 cases so we do not create a surge within our healthcare systems and overwhelm the healthcare professionals who are managing our response on the front lines,” Murphy said on April 7.

“We have seen far too many instances in our parks where people are gathering and socializing in groups. By closing these areas, we are further limiting public interactions to only the most essential purposes.

“Data shows our aggressive efforts to flatten the curve are beginning to make a difference; however, we must continue our push to flatten it to the point where our day-over-day increase is zero,” the governor said.

Under Executive Order No. 108, municipal officials still have the authority to keep municipal parks open or closed, according to a press release.

Law enforcement personnel, including New Jersey State Police, State Park Police and Conservation Police, will enforce the governor’s order at parks, forests and among boaters on state open waters to ensure compliance with social distancing mandates, according to a press release.

“We regret very much that it has become necessary to close our state parks and forests at this time,” McCabe said. “This is not a decision DEP makes lightly.

“We understand New Jerseyans particularly need fresh air and exercise during this stressful time, but as the weather warms, our parks are becoming crowded and it is difficult in many places to observe the social distancing that is so critical to fighting the COVID-19 outbreak.

“Now more than ever, we need to redouble our efforts to flatten the curve, as the governor has urged us daily. The DEP urges all New Jersey residents to cooperate with this direction, to protect themselves, their families and all our communities.

“State Park Police will actively patrol to enforce these closures and fines will be assessed where people failure to comply. We look forward to welcoming you all back as soon as conditions are improved enough to allow safe use of the parks,” McCabe said.

The New Jersey Outdoor Alliance took issue with Murphy’s directive and in a press release the alliance called his order to close all state and county parks “ridiculous.”

The alliance is urging state officials to review the impact the order could have on people’s mental health.

The group, which represents New Jersey’s 794,000 hunters, anglers and fishermen, called on Murphy to reopen state and county parks with the same social distancing and occupancy guidelines it said have worked for New Jersey thus far so sportsmen and other outdoor recreation enthusiasts can continue to practice healthful activities that it said are a boon to mental and physical health at a time when morale is critically important to the state.

“It’s no secret we disagree with the governor on many policies, but the alliance gladly gave the governor credit for his common sense (two weeks ago) because it was a no-brainer then just as it is now (to keep state parks open); keeping nine million New Jerseyans locked in their homes for 12 or more weeks is ridiculous and an overreach” NJOA spokesman Cody McLaughlin said.

“We have guidelines for social distancing and we, in good faith, committed to those guidelines. Yet once again, with no legislative oversight in a ‘free society,’ Gov. Murphy has decided to act unilaterally on something that is not proven to help anything.

“Meanwhile, the hundreds of thousands of trout that have been stocked in those state and county parks will go to waste and key components of healthful solitary recreation are now being sacrificed on the altar of fear and good headlines. It’s asinine, plain and simple,” McLaughlin said.

“All we are asking for as sportsmen, taxpayers and conservationists is the same thing we have always asked of this administration: respect for the passion we have for our lifestyle; decisions based on sound science; and for the administration to work with us. We have received none,” the spokesman said.