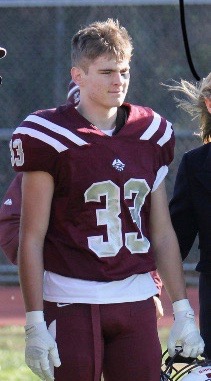 The sport of football has been a huge part of Will Dal Pra’s life for the past 12 years.

Ever since he put pads on during his Red Bank youth football days, football has been the Red Bank Regional High School senior linebacker’s favorite sport, creating memories Dal Pra will remember for the rest of his life.

The Jay Patrick Unsung Hero Award is presented by the Vince Lombardi awards committee to the Monmouth County high school football player who has persevered and made real contributions to his team while not expecting anything in return.

Dal Pra, who did not know he was a nominee for the award, said in an interview that he was happy when he was told he had received the honor.

“It’s pretty cool,” Dal Pra said. “It kind of came out of nowhere with the football season having ended four months ago. It’s a very cool honor to get during this time with the coronavirus going on.”

Dal Pra put together a strong senior campaign in his only season as a starting linebacker for the Buccaneers.

Despite only seeing time primarily on special teams at the varsity level during his sophomore and junior seasons, his love of football helped Dal Pra strive to work hard in the off-season prior to his senior year to become the leader of a Red Bank defense that was ranked in the Top 10 of the Shore Conference during the 2019 season.

Dal Pra led the Buccaneers with 88 total tackles in 2019. He recorded four sacks and 12 tackles for a loss to help Red Bank go 7-4 and qualify for the NJSIAA South Jersey, Group 3 playoffs.

“It was pretty good to have this type of success,” Dal Pra said. “It made it worth it after having only played special teams the last two years. The team did really well. We have no regrets on how the season went.”

During the winter season, Dal Pra competed at 170 pounds for the Bucs’ wrestling team and was a Region 5 tournament qualifier by placing third at the NJSIAA District 20 Tournament.

In the classroom, Dal Pra holds a 3.7 GPA and will attend Florida State University where he plans to study business.

When Red Bank faced off against Long Branch High School in the 97th annual Thanksgiving Day game between the rivals on Nov. 28, Dal Pra knew it would be his final game on the gridiron.

Feeling great after helping the Buccaneers roll to a 21-8 victory over their rival to win the Ty Lewis trophy, a surreal feeling came over Dal Pra as he walked off the field he had given his all on for the past four years at Red Bank Regional.

His time on the gridiron was over, but the memories he made during his 12 years of playing the sport will always be with him as he enters the next chapter of his life.

“I always just wanted to be a part of the team,” Dal Pra said. “I still talk to a lot of people I have met through football. I have great love for the game.”

Dal Pra will receive the Unsung Hero award at the Vince Lombardi awards dinner. The event was postponed last week due to the coronavirus pandemic and a new date has not been announced.