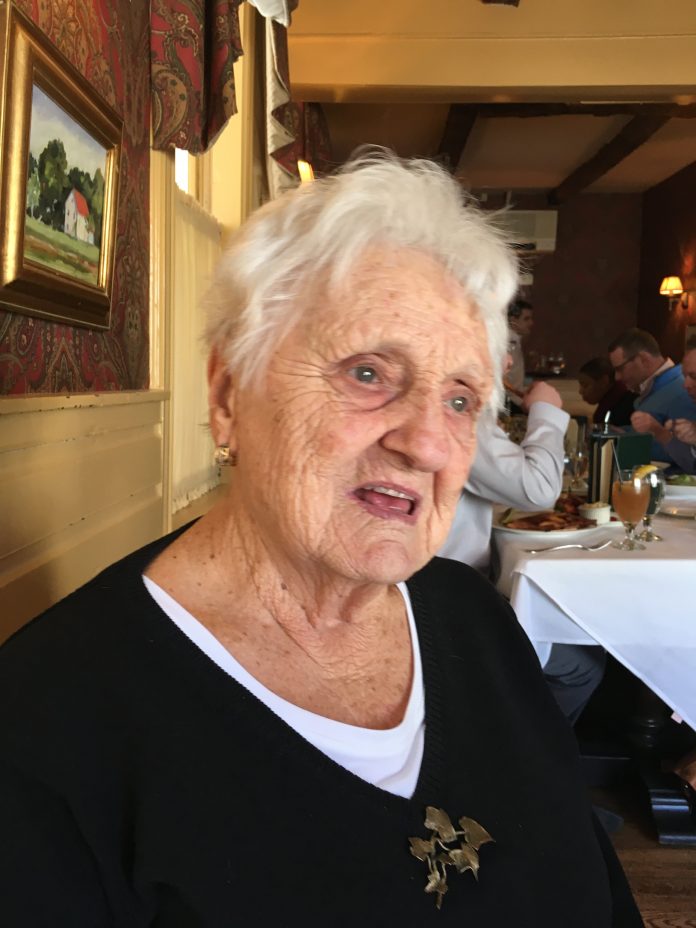 Ruth was first and always a homemaker.  For 63 years, she directed her energies and talents to her career as wife of John Cilo, Jr., mother of their two daughters, Miriam Cilo Burns and Leah-Beth Cilo-Saylor, and good neighbor to all, in preference to the school teacher that Glassboro State College had intended.

Ruth was born on January 25, 1937, to Dimitri and Mary Ilnicki on her grandparents’ farm in Dayton.  Ruth was an avid participant in 4H Clubs, including a baby beef club for which she raised steer and a Seeing Eye club for which she trained guide dogs for the blind.

Ruth excelled at all sports.  She was a star softball shortstop as a teenager and later directed her considerable athletic gifts to tennis.  She played competitively at Princeton University’s Jadwin Gym and was often seen on the courts of the Nassau Tennis Club in Skillman.

John and Ruth first met when she was a third grader in pigtails at Dayton Grammar School.  Both graduated from Jamesburg High School, and they married soon after John graduated from the Rutgers University School of Engineering.  Their move to Belle Mead in 1960 was prompted by John becoming Assistant Somerset County Engineer, and their new ranch house and garden gave scope to Ruth’s love of tending to and making pretty things, like the dresses she sewed for herself and the girls.

Back then, southern Somerset County was still rural farm country, with Harlingen Church a hub of community life and homes in the Ludlow Avenue development a forerunner of postwar suburbia.  The Cilos fit right in. Ruth, the soul of kindness, became meeter and greeter of all who passed her door, and the Cilos’ picnics introduced country neighborliness to everyone around the block.  Ruth loved Wednesday luncheons at Harlingen Church and leading a 4H sewing club. Her friendly outreach extended to any she saw in need: neighbors, dogs, cats, no matter; if help was needed, help she did.  Nothing pleased her more than giving things away, a delight in which she was quietly indulged by John. Ruth will be greatly missed.

Ruth Cilo is survived by her devoted husband John; daughter Miriam and son-in-law Ed Burns, of Manhattan; daughter Leah-Beth and son-in-law Steven Saylor, of Philadelphia; brother George Ilnicki, of Hackettstown (brother Richard Ilnicki predeceased her); and a beloved grandson Peter Cilo Burns, who, Ruth would want everyone to know, is caring and considerate as well as a smart kid.

Funeral arrangements by Cusick Funeral Home were private.  A memorial service at Harlingen Church will be announced when Coronavirus restrictions are lifted.  Gifts in lieu of flowers may be sent to The Seeing Eye in memory of Ruth and all the Seeing Eye puppies she raised while growing up herself.