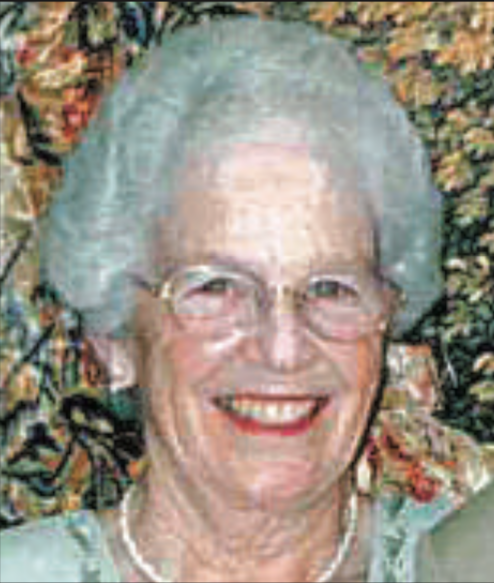 Bonnie Dale Larzelere Thompson, age 92, died peacefully on Saturday, May 16th, 2020 in Monroe Township, NJ, surrounded by her loving family and beloved husband of 70 years. Bonnie was a devoted mother, grandmother, wife, sister, member of the church, and community volunteer.

Bonnie attended Dickinson College and graduated in the spring of 1949 with a Bachelor of Science degree in Chemistry. She was one of 38 women who graduated that year. Known as the “nitric acid expert”, Bonnie is remembered for her ready come-backs, good natured mischief, chemistry capers, and practicality. She felt incredibly lucky to attend Dickinson and made the most of her experience by giving her time to a variety of organizations. She was an active member of the Chi Omega sorority and also participated in theater, choir, the yearbook committee, and college social committee.

Bonnie married Mahlon Mason Thompson on June 18th, 1949 in the Church of Our Savior in Jenkintown, Pennsylvania. Following graduation, Bonnie worked as a chemist for Whitehall Pharmaceutical Company of Elkhart while her husband finished mortuary science school. Bonnie and Mahlon’s first daughter was born in May 1951, and Bonnie gave birth to her son in April 1954. The Thompsons lived in Trenton, NJ where Mahlon was an owner of the Poulson & Van Hise Funeral Home, and they later moved to Ewing Township after giving birth to their second daughter in August 1957. With three children under the age of 10, Bonnie and Mahlon moved to Yardley, PA in 1959, and Bonnie gave birth to her third daughter and last child in April 1960. The Thompsons lived in Yardley for fourteen years and established long lasting roots in the community. They then moved to Cranbury, NJ in 1973, where Bonnie worked side by side with Mahlon and daughter Christine as owners of A.S. Cole Funeral Home from 1973 to 1991.

A faithful and giving spirit, Bonnie tirelessly committed to giving back to the community and spent more than 50 years of her life volunteering. She received a 20-year award from Meals on Wheels for her dedication to their program, and she was an active member of the Lioness Club and Women’s Club of Cranbury. She was also a Founding Member and Former Treasurer of the Cranbury Historical and Preservation Society. Bonnie spent her time caring for the elderly and regularly volunteered with her grandchildren at the Elms of Cranbury. Finally, Bonnie was a devoted member of the United Methodist Church and steadfast in her commitment to church events and initiatives. Bonnie and Mahlon were active members of the St. Paul’s United Methodist Church in Trenton for over twenty years, and Bonnie served as Treasurer of the Cranbury United Methodist Church for over a decade.

We would like to sincerely thank her two caregivers, Bea and Donna, for their special care, love, and devotion to Bonnie. Family graveside services will be held and officiated by her grandson in the Westminster Cemetery in Cranbury under the direction of the M. David DeMarco Funeral Home, Inc., Monroe Twp. NJ. Due to the corona virus restrictions, a celebration of Bonnie’s life will be held at a later date.