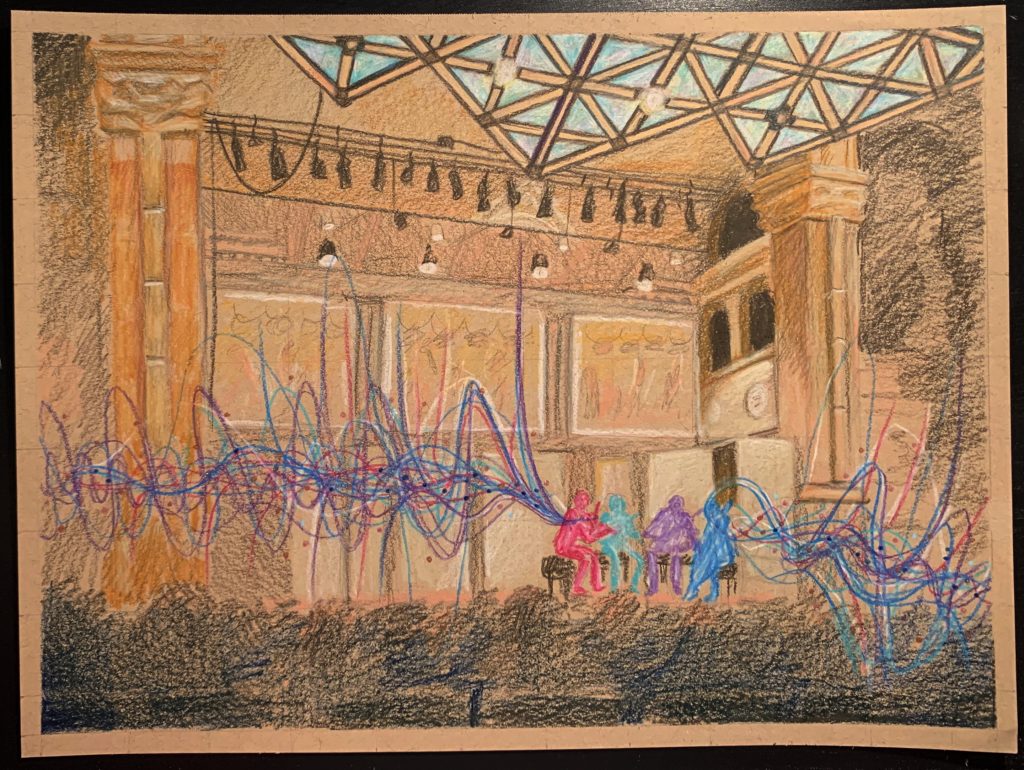 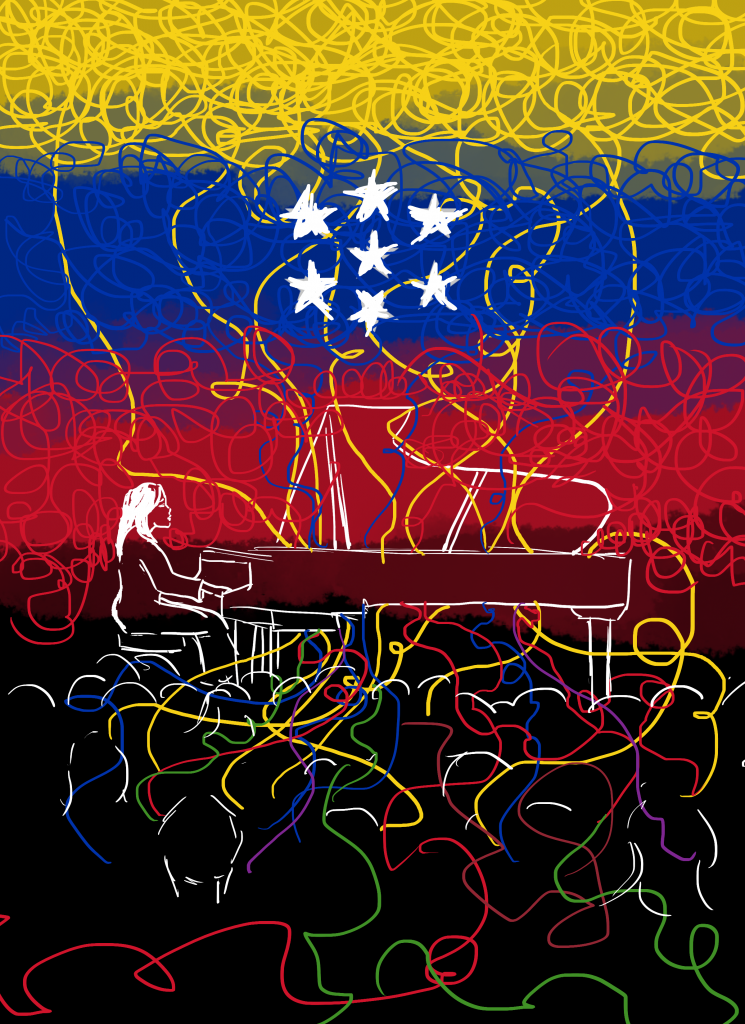 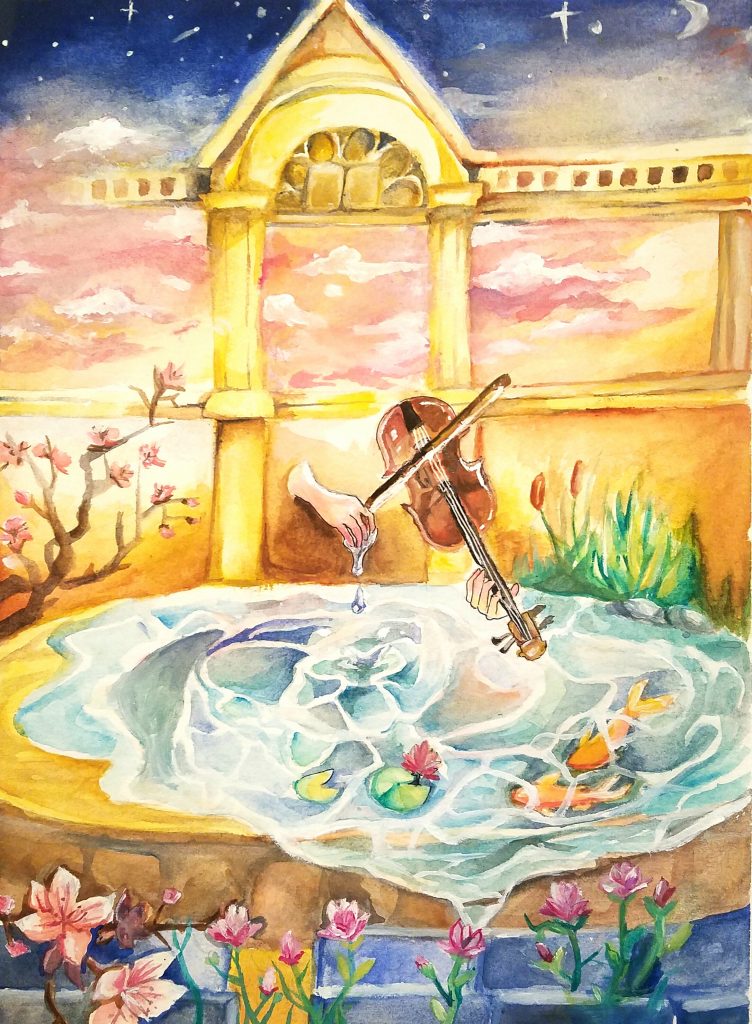 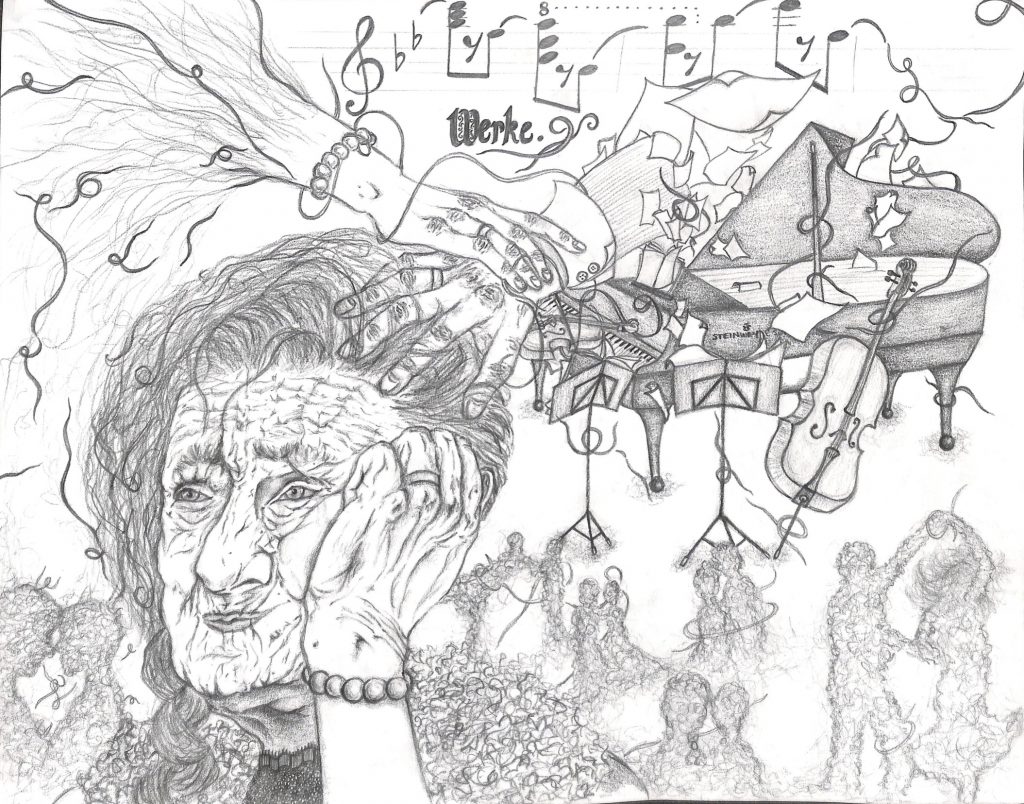 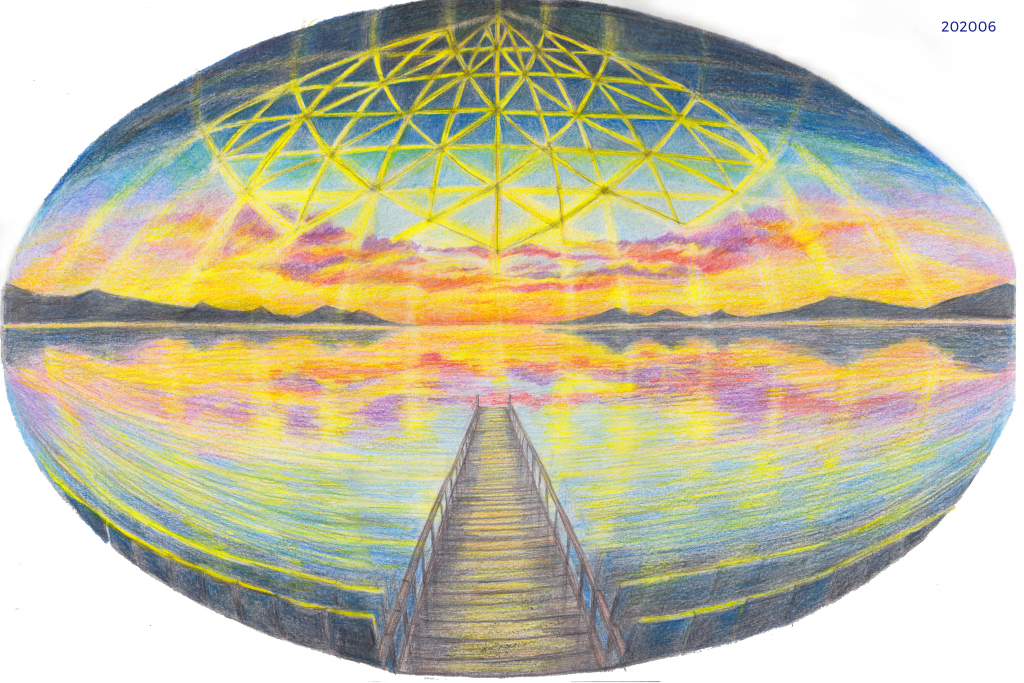 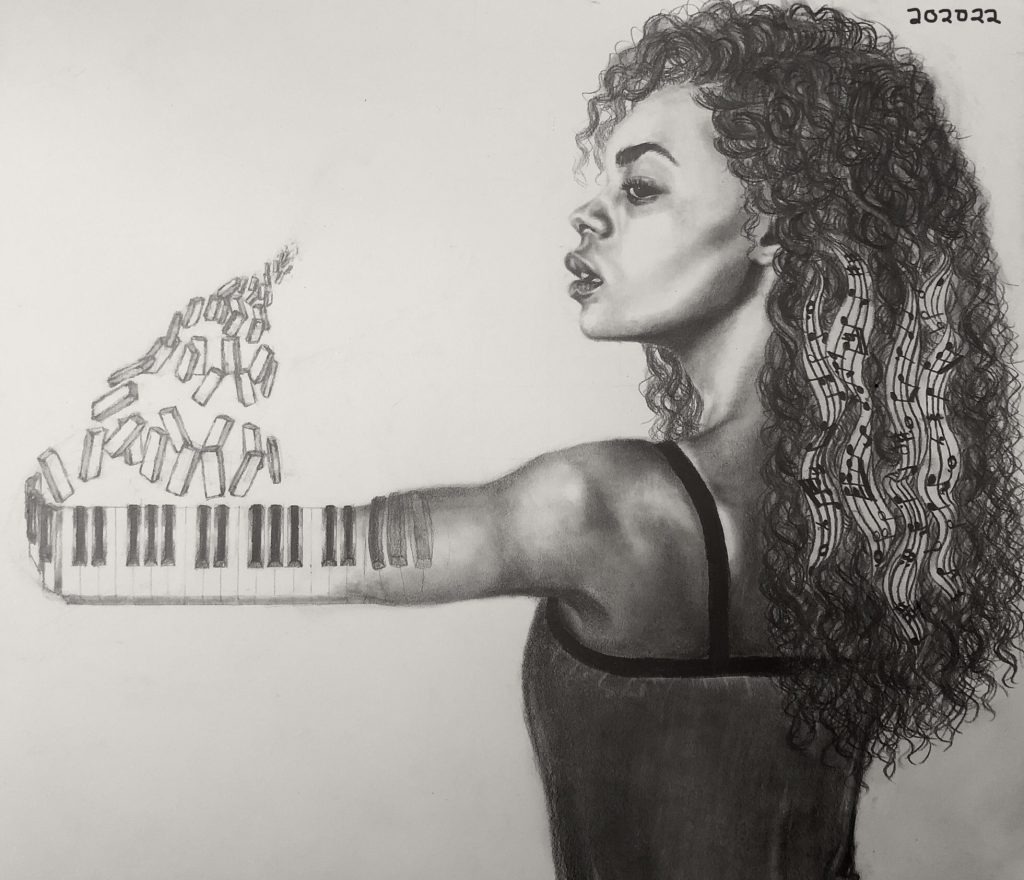 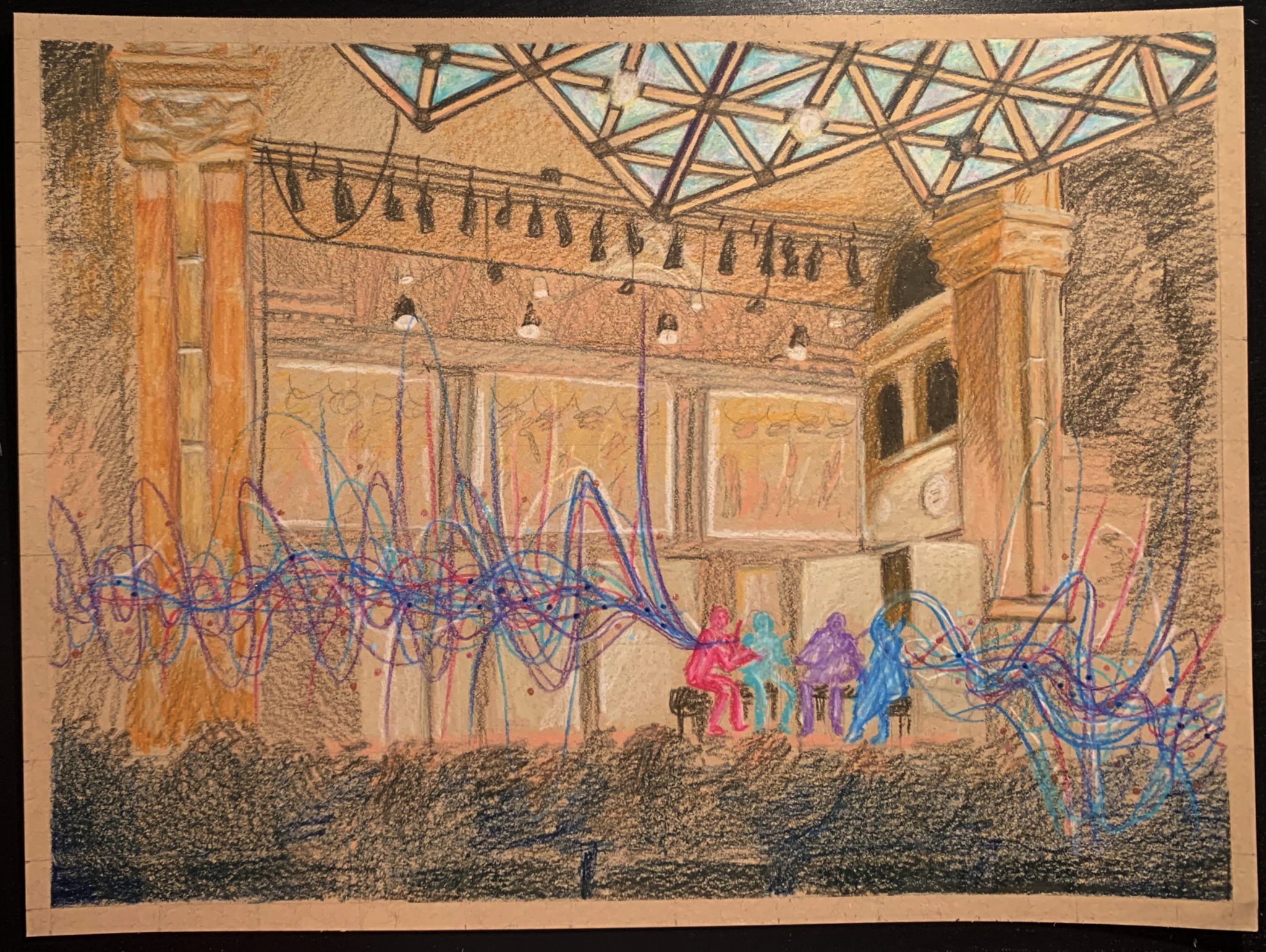 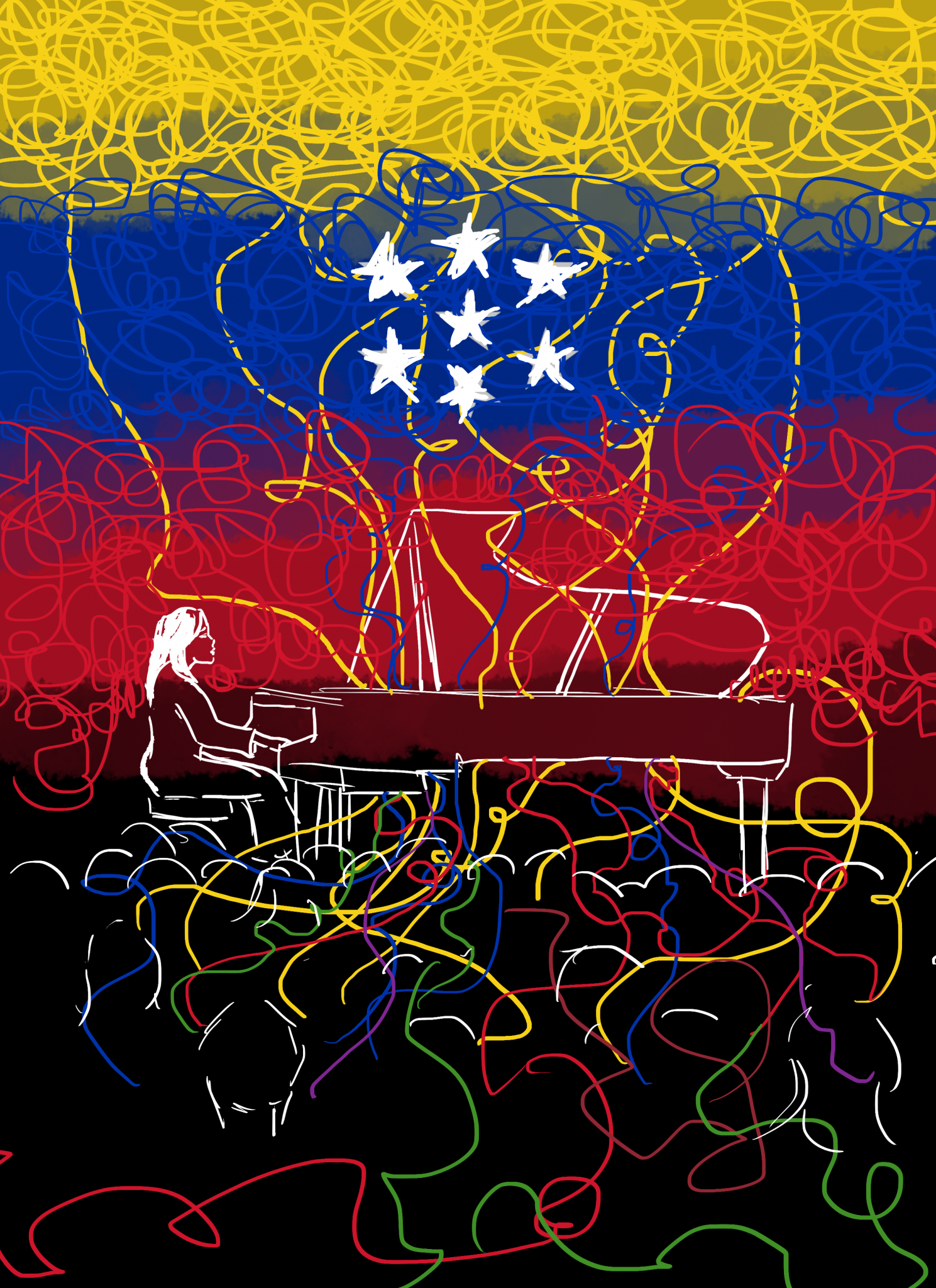 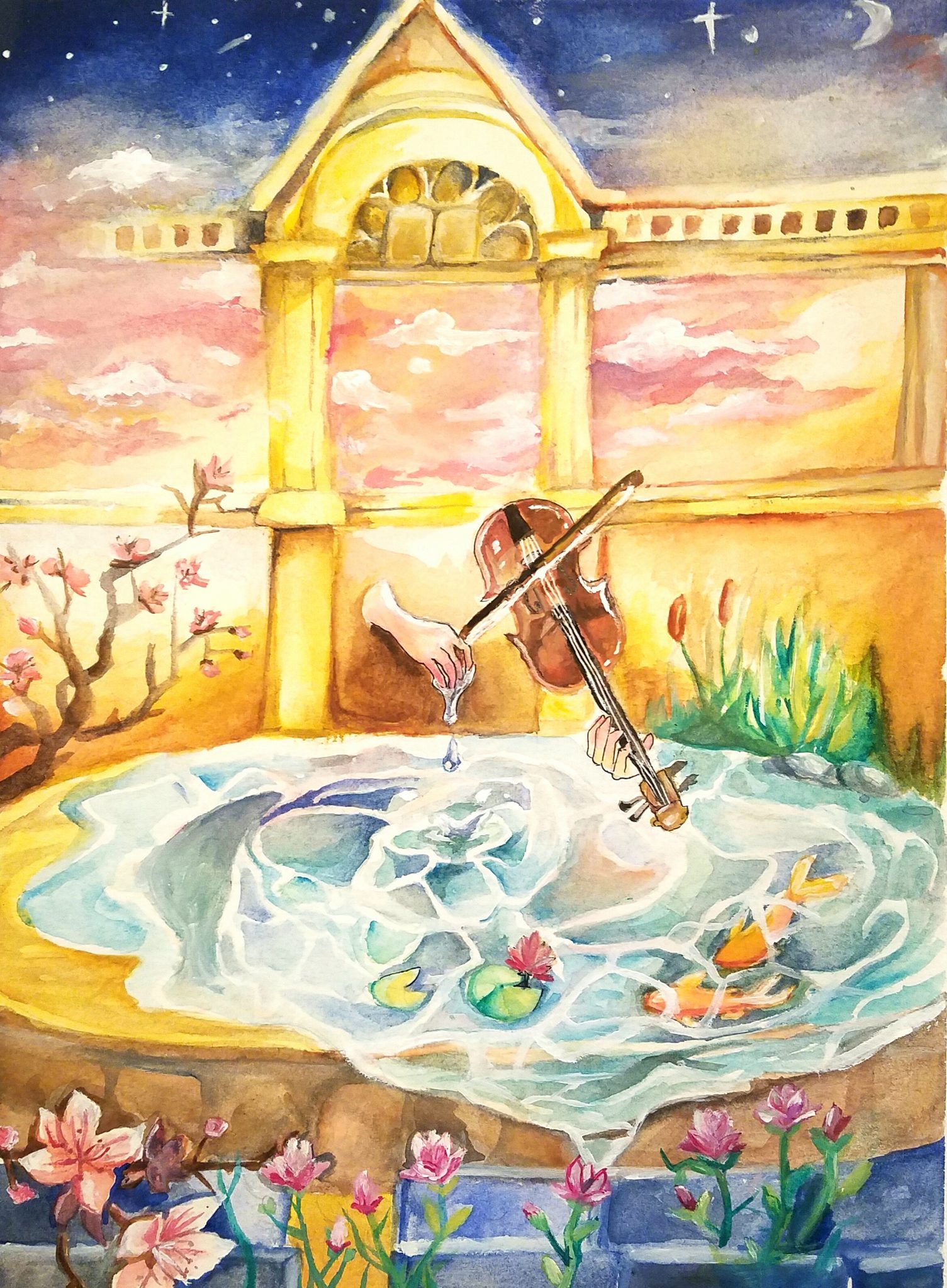 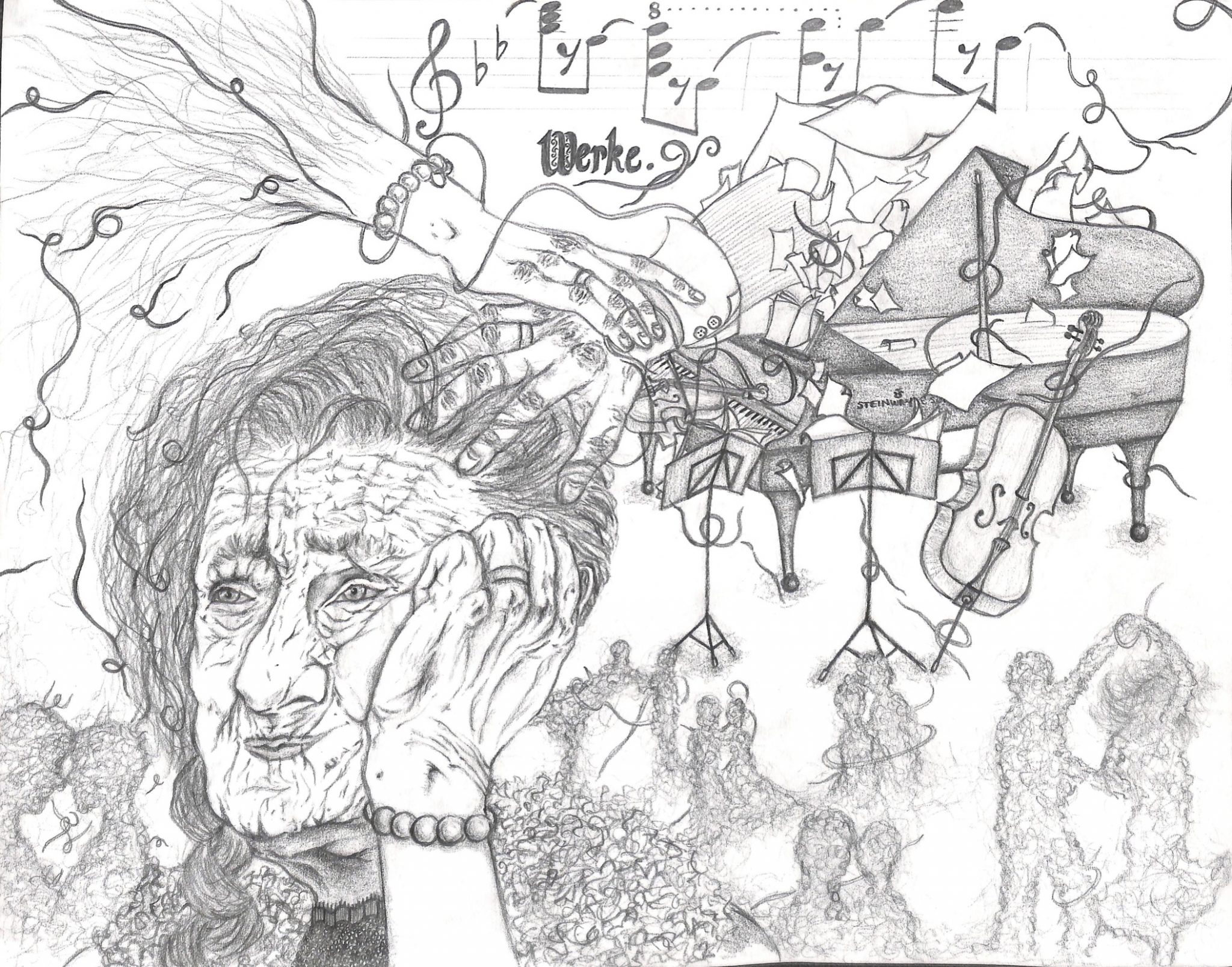 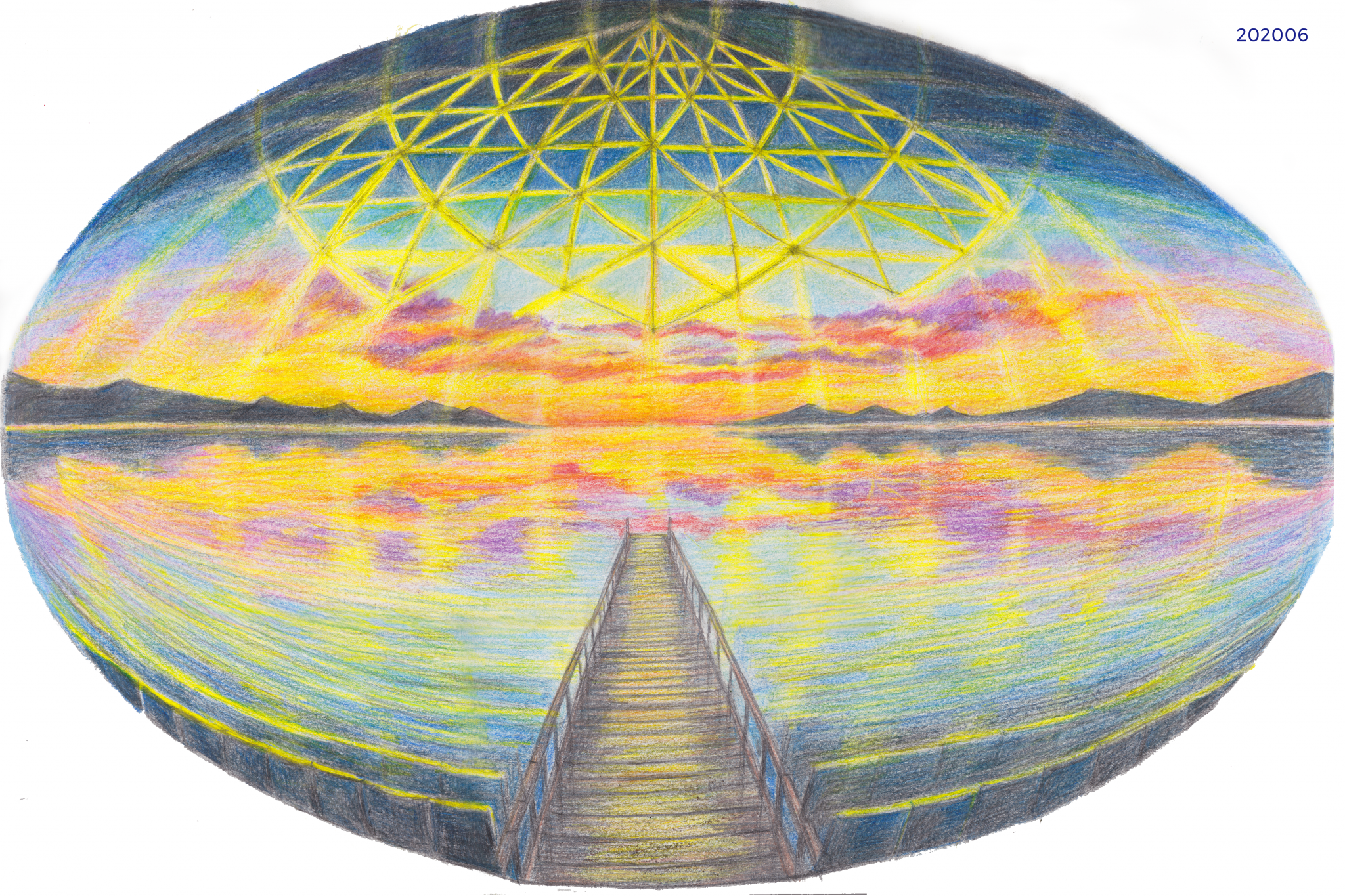 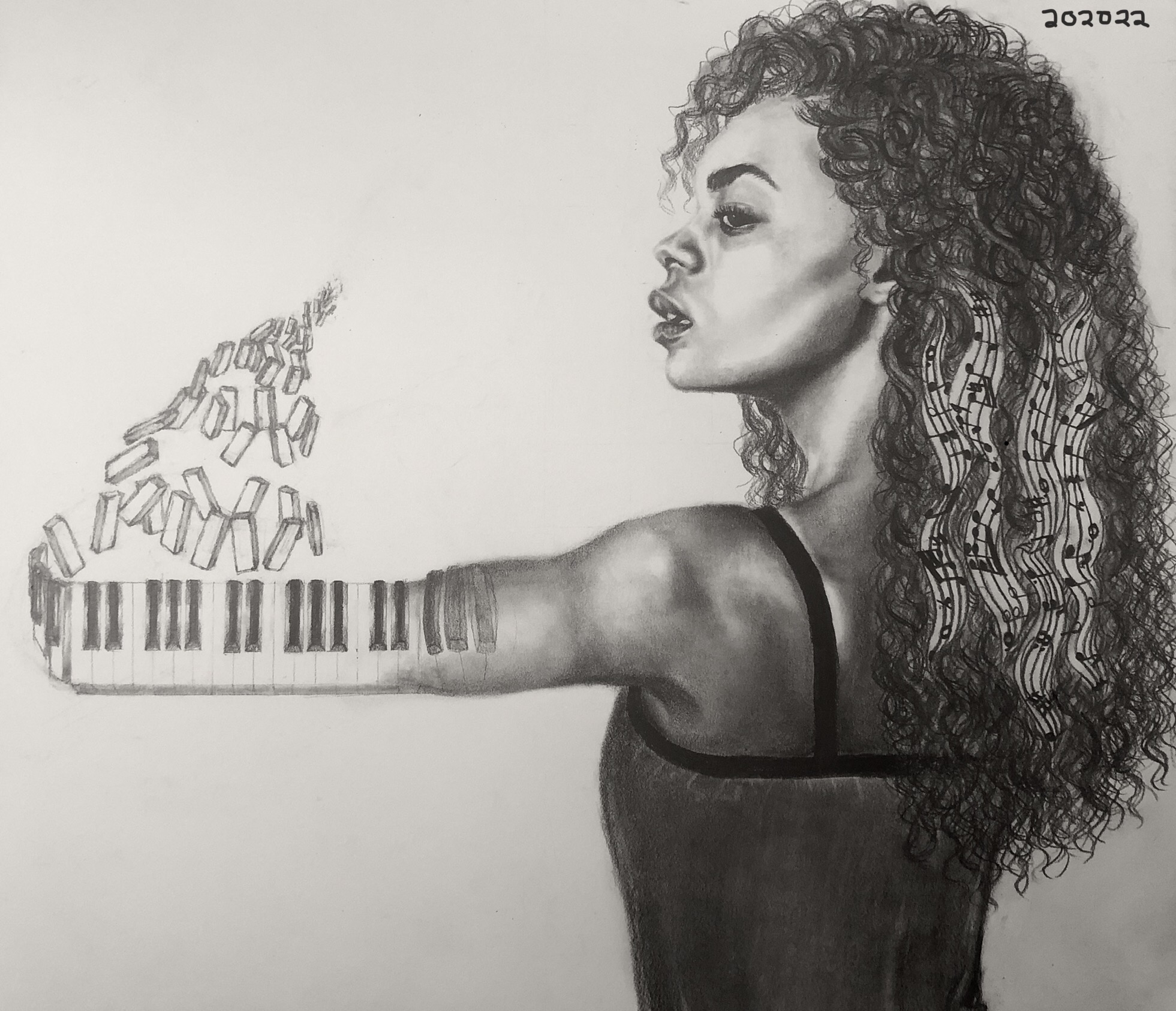 How might one visually represent the experience of going to a Princeton University Concerts event? Thirty-two Princeton University students, both undergraduate and graduate, signed up to take on this challenge as part of the sixth annual Creative Reactions Contest, one of several programs sponsored by the concert series to engage students in classical music.

Getting free access to a range of Princeton University Concerts offerings – including traditional concerts, Performances Up Close with audience seated on stage, Live Music Meditations, and the annual Chamber Jam – the students were offered the chance to anonymously submit a drawing of their experience, with an accompanying artist statement about their work.

The contest submissions were due at the beginning of April, after students transitioned off campus to a remote curriculum. As a result, the contest took on a new role: a respite from the stress of adapting to this new environment.

After two rounds of judging – the first by Princeton University Concerts staff, and the second by local artist Marsha Levin-Rojer, Lewis Center for the Arts lecturer and former Hodder Fellow Mario Moore, and staff graphic designer Tom Uhlein – one winner and five honorable mentions were awarded.
Alyssa Cai, a senior in the Class of 2020, received first place and $1,000 for her colored pencil drawing in response to a Live Music Meditation with cellist Jean-Guihen Queyras.
First year students Nazdar Rosna Ayzit, Eliana Gagnon and Sam Melton, Class of 2023, and sophomore students Helen So and Sandy Yang, Class of 2022, received honorable mention and $100 each.
The winning submissions are posted online and distributed publicly by Princeton University Concerts. Below is information taken from their bios on the website:

In her accompanying artist statement, Cai shared, “As I sat down in the soaring space of Richardson Auditorium and gazed up at the geometric scaffolding, I felt enveloped by a golden light. Jean-Guihen Queyras’ playing was beautiful, and as I settled into the sounds of the strings and the silences – a wonderful component of reflection during meditation session – I felt transported to other worlds. I could close my eyes and imagine a scene of complete serenity, an escape from the stresses of Princeton, which is what I tried to convey in my work.”

From a young age, Cai’s family shared music by singing and playing the guitar and harmonica. While piano remains her main instrument, she also participated in school bands on the flute and mellophone. She recounts participating in the Rose Bowl Parade and President Barack Obama’s second Inaugural Parade with her high school band as particular highlights. She brought her love of ensemble playing to the Princeton Pianists Ensemble during her undergraduate career.

Cai entered the Creative Reactions Contest intrigued by “idea of making art according to a musical experience, which is not something I’ve tried before. Working through the aural and visual inspiration of the concert ignited a fresh form of thinking and creating art that—something I hope to continue experimenting with.”

Ayzit is a first-year student, hailing from Istanbul, Turkey. She is considering a concentration in Economics, and Certificates in Creative Writing and Entrepreneurship.

Having played the piano for eight years and attended classical music concerts and operas in Istanbul, she now describes herself as “an occasional performer, singing in the dorm showers.” Missing the artistic pursuits in her life which have been overtaken by the demands of her academics, Nazdar entered the Creative Reactions Contest as a way to make time for music and art and to reconnect with what she has “always loved the most: to get inspired and to create.”

The all-Beethoven program that Nazdar attended for the contest, performed by violinist Isabelle Faust, cellist Jean-Guihen Queyras, and pianist Alexander Melnikov, was the first concert that she attended on campus.

For her, “music, arts, and stories are all faces of the same complex, beautiful story of a life,” a concept that she translated into a pencil drawing narrating an imaginary story that she found within the music.

“My emotions during the concert were floating freely with the music in the air of Richardson, enwrapping and tickling each soul there until they landed on their vessel, the lady next to me. She was there alone, just like me … just after the piano began to set the scene, and the cello began to flirt with the violin in all its playful nature, the perfect lady leaned her cheek to her palm and sighed. Never have I seen such a scene of palpable memory, offering the tiniest glimpse for a bystander like me to a life richer than her pearls, deeper than the auditorium. For the duration of the concert, she stayed in that pose, lost in lived moments of music.”

Gagnon is a first-year student who is considering a concentration either in Psychology or in the Practice of Art, with an interest in African American studies.

Having always been an avid music lover, both as a violinist and as a listener of a wide range of genres, she attended a Performance Up Close program with pianist Gabriela Montero as part of the contest. This was Gagnon’s first encounter with a Princeton University Concerts event.

Inspired by Montero’s improvisations on popular themes suggested by the audience, Gagnon submitted a drawing of a representational figure through which she conveyed the eradication of distance between Montero and herself through the music.

“I could feel the music coursing through my veins, as though I had become one with an instrument I previously had no connection to,” she shared in her accompanying artistic statement.

Melton is a first-year student planning to major in Civil and Environmental Engineering. As a pianist, occasional guitarist, and composer, she entered the Creative Reactions Contest to combine her passions for music and drawing. An active participant in the arts on campus, she writes for the Princeton Triangle Club, and is looking forward to having the Princeton University Players produce a staged reading of her original musical next academic year.

Although Melton enjoys many different styles of music, she had not heard a lot of live classical music before coming to Princeton. The concert that she attended for the contest, featuring the Calidore String Quartet, was the first Princeton University Concerts event that she experienced, and she looks forward to “seeing even more live classical music in Princeton in the future.”

Fond of doing architectural sketches, Melton was initially inspired by Richardson Auditorium. Hearing music within the hall compelled her to relax away from the structure and embrace a more free-flowing and colorful approach to her drawing.

“The music felt like it disrupted the rigid columns of Richardson Auditorium – and the rigid structure of my typical day.”

The resulting piece, a colored pencil drawing, sets four colorful musicians and a dynamic  representation of their music against the detailed backdrop of the concert venue.

So is a sophomore in the Woodrow Wilson School of Public and International Affairs, with a deep love for music. While she has played the piano for more than 13 years, she also plays the violin and clarinet.

“Music is a crucial part of my life,” she said. “My piano is not only an instrument for artistic expression, but also a dear friend, one that I can vent to with Rachmaninoff and express my joys to with Chopin.”

So attended a recital by pianist Gabriela Montero as part of the contest, for a program that included both composers, as well as improvisations. The final improvisation was performed in dedication to the dire political situation in Venezuela, Montero’s home country.

For her artwork, So “wanted to capture the emotional connection Montero managed to create with the audience during her concert … to illustrate that culminating moment where she took that audience connection and played that song [for Venezuela], somber with a touch of hope, with her whole being … to illustrate her concert’s joy, darkness, and sense of reciprocity.”

This was her second year participating in the Creative Reactions Contest.

Yang is a sophomore pursuing a concentration in Molecular Biology with a Certificate in Global Health. Having played the piano throughout her childhood, she continues to turn to the instrument as a way to de-stress and spend time with her little sister, who plays the guitar and ukulele.

Yang remembers hearing pianist Lang Lang perform live when she was in elementary school, and since then she has enjoyed attending student performances and classical Chinese music concerts.

“Music and art are both incredibly close to my heart,” she said, “and I thought the Creative Reactions Contest was an exciting and unique way to be able to connect them and to foster a sort of appreciation for music that I hadn’t before.”

Describing herself as a visual person, Yang depicted her ability to hear narrative within music in an artwork that portrayed the musicians and concert hall transforming into an imaginative landscape. As a first time participant of the contest, she encourages other students to participate in future years.

To view the submissions, visit https://issuu.com/princetonuniversityconcerts/docs/creativereactions_final