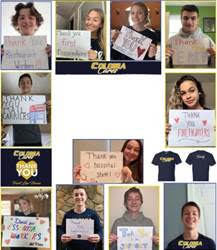 WOODBRIDGE – Jack Reilly knew his group of friends, who came together to create Colonia Cares, would be able to do great things.

“A lot of us are on student council and are involved in school,” he said. “So I think that’s why we had a lot of success … we put a lot of effort into it.”

Colonia Cares began on April 18 and garnered media attention and praise from Gov. Phil Murphy and local officials. To date, the group has raised $20,000-plus for the local food banks.

Mayor John McCormac and Ward 5 Councilwoman Debbie Meehan gathered the friends – with proper social distancing – in front of Colonia High School (CHS) to recognize the group on May 22. The friends are juniors at CHS.

“We’re all in a very good position to help people who aren’t as lucky as we are,” Harrison said.

With that impetus, the friends decided to sell shirts and signs to raise money. To date, the group has sold 2,000 signs and shirts, which were made by A and B Promotions in Cranford. The shirts sold for $15 each.

The group held a collection drive on May 16 at the Evergreen Senior Center. Kerri said many people came by to drop off food donations and the group also raised donations through a coin toss.

“I can’t be prouder as a parent, as your principal. What you guys did is part of who we are as far as giving back to the community,” Pace said, adding the efforts made by the students keep him “optimistic and hopeful” for what the future will bring.

Peter Barcellona, who chairs the We Feed Food Woodbridge Food Bank, said the 11 food pantries in the township on average feed 600 families a month.

“Now the pantries feed more than 800-plus families a month,” he said. “The need is great … people who generally donate are now in a situation because of COVID-19 in need.”

As for the future, the students said they will continue their efforts to make a difference.