The Lawrence Township Public School District has been named a National District of Character for 2020, making it one of seven public school districts nationwide to receive the honor from Character.org.

Character.org is a national, non-profit group that works with schools and school districts to help students become ethical and compassionate citizens, according to its website, www.character.org. Based in Washington, D.C., it was formed in 1993 to provide leadership and advocacy for character development worldwide.

Schools and school districts that apply must meet the standards outlined in Character.org’s 11 Principles framework for schools. Each school is evaluated by a team of trained educators, which includes a site visit.

Among the 11 principles, for example, is Principle 5. It asks the school to provide students with “opportunities for moral action.” Students learn how to work as part of a team, to negotiate for peaceable solutions, to recognize and resolve ethical dilemmas, and identify and meet school and community needs.

Principle 7 helps students to become self-motivated. “‘Character’ means doing the right thing and doing one’s best work, even when no one is looking,” Character.org’s website said.

Having won recognition for its efforts, the Lawrence Township Public Schools serves an exemplary model for all schools and school districts in the United States, said Lori Soifer, who directs the Schools of Character program.

“The educators at these schools are inspiring their students to be honest and trustworthy. They learn to contribute their time and talents to the common good, and to show courage to stand up for what is right,” Soifer said.

The Lawrence Township Public Schools and the various schools within the district have worked with Character.org and its predecessor, the Character Education Partnership, for more than a dozen years.

“We are thrilled to receive this recognition for our staff and students’ dedication to living and modeling our values, and to being mindful to do the right thing,” said Amiet, Eldridge Park School principal. “Character education is woven throughout our district. It is not simply an initiative that is touched on occasionally, or something to do to receive an award. You see character education in the classroom, the lunchroom, the hallway and the nurse’s office. It thrives on the stage, on the soccer field and at the bus stop.”

All seven districts that earned National District of Character designations were praised by Arthur Schwartz, president of Character.org.

“Each of these school districts and schools has put in place a comprehensive approach to help their students understand, care about and consistently practice the core values that will enable them to flourish in school, in relationships, in the workplace and as citizens,” Schwartz said. 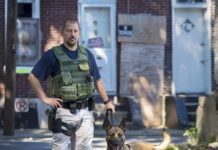