A contract for $8.5 million for renovations and additions to Princeton High School has been awarded to an Elizabeth-based contractor by the Princeton Public Schools Board of Education.

H&S Construction’s base bid was $8.1 million, plus $400,000 to include several alternates, or additional projects. Those projects included bathroom renovations, refurbishing the elevator, creating a “grab and go” food option and some electrical upgrades.

The food option will be paid for out of food service enterprise funds and not from the bond referendum. The high school renovation project, along with projects at other schools in the district, is being paid for through the $26.9 million bond referendum approved by voters in December 2018.

The Princeton High project also calls for the fitness center to be renovated. There will be space for wrestling, fencing and cheerleading. There will be renovations to 17 offices in the Guidance Department, as well as six additional meeting rooms.

The school board held off on awarding a bid for one of the additional projects, which called for building a combination concession stand and storage building that would also include three bathrooms.

The building would be located near the tennis courts. H&S submitted a bid of $530,000 for that project as part of its overall bid submission. A vote on the issue is expected at a subsequent school board meeting.

The merits of the combination concession stand/storage building generated some discussion at the school board’s Facilities Committee meeting June 1.

Project architect Scott Downie said the $530,000 bid submitted by H&S Construction and Mechanical was less than the budgeted amount of more than $700,000.

Facilities Committee co-Chairman Brian McDonald said that having bathroom facilities near the athletic fields would aid in safety and security by eliminating the need for visitors to enter the high school to use the bathrooms.

Athletic Director Brian Dzbenski said the concession stand/storage building would be an asset to the district. It would have an ice maker and also provide a source of drinking water for the student-athletes.

The ice maker is important because it would make it easier to fill tubs with ice for the athletes, Dzbenski said. The tub is used to treat athletes who are suffering from heat-related illness during practice.

McDonald and Dzbenski pointed out that Princeton High is one of the few schools in the area that does not have such a building with bathrooms in close proximity to the athletic fields.

“We are kind of behind [the times],” Dzbenski said.

“The students feel their needs have never been prioritized. Here we are in 2020 and the gym is just getting air conditioning,” Baxter said. Air conditioning in the gym is included in the bond referendum for the high school. 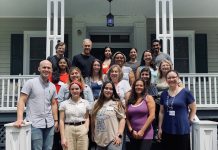 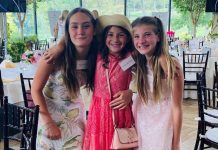