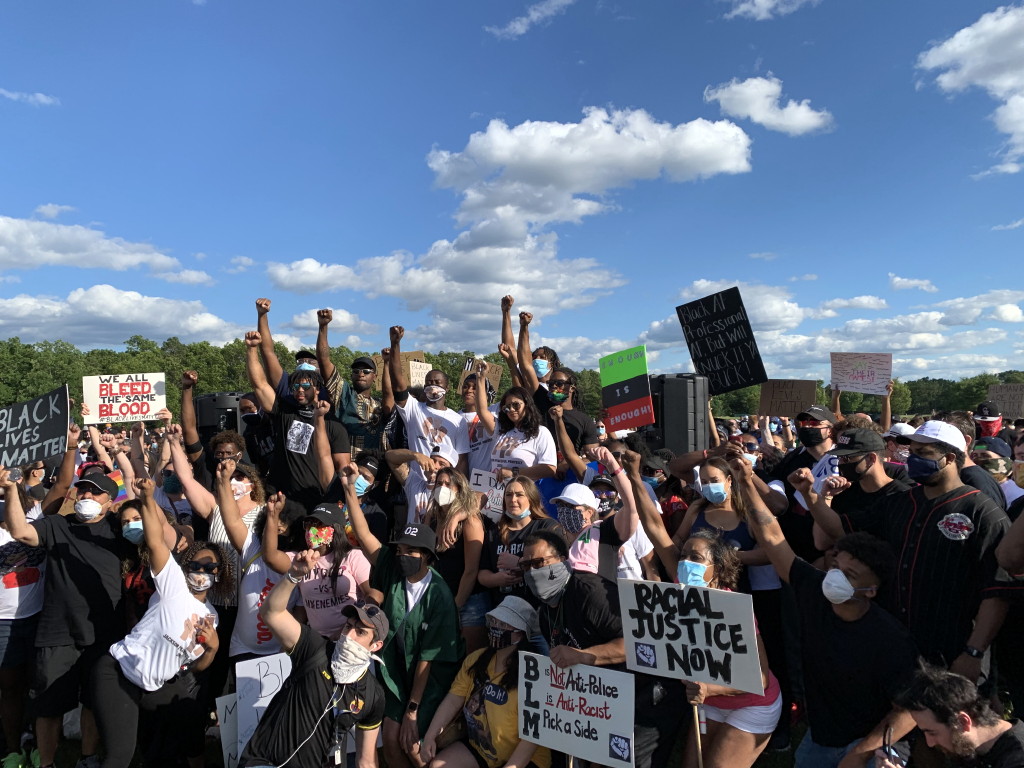 JACKSON – A peaceful protest was held at John F. Johnson Jr. Memorial Park in Jackson on June 7 and at least 1,000 people attended to make their feelings against racism and police brutality known.

The local event followed the May 25 arrest of George Floyd, a 46-year-old black resident of Minneapolis, Minn. Video of the arrest shows a white police officer, Derek Chauvin, pressing his knee to Floyd’s neck for almost nine minutes.

Floyd was handcuffed and was face down in the street during the time Chauvin was astride him. Floyd died during the incident and Chauvin has been charged with second degree murder.

Three other officers who were at the scene of Floyd’s arrest have been charged with aiding and abetting second degree murder.

The speakers mentioned the killing of George Floyd, Breonna Taylor, Ahmaud Arbery and other individuals who have died at the hands of police, and what they said were systemic racial problems that have persisted throughout history.

The event was organized by Jackson residents Dan Niblack and Elliot Bell.

Niblack, 25, has lived in Jackson for 10 years. He explained what motivated him to organize the rally.

“I just want to be free to drive around my town without being racially profiled. It is ridiculous because it has been going down since I was a kid, honestly, and I just don’t like that.

“It is ridiculous how we can’t even wear wave caps (stocking caps) in our own town. We can’t do anything, even going to school we get pulled over. I am just tired of it. Our voices have got to be heard,” Niblack said.

He said he wants all people to come together and stop racism.

“Black, white, whatever. Black people can be racist, too. I just want us to come together. I have a lot of white friends in town and I feel everybody is confused right now, so if we come together, say the issues and tell the cops, I feel like it can go far. I just want to say I did something,” Niblack said.

“What I was hoping to accomplish was basically to bring everybody in Jackson together, to let them know there is a race issue in Jackson. All that needs to stop; as well as coming together to bring justice for George Floyd, to fight against police brutality that is going on all over the country.

“The Jackson Police Department, for the most part, has been very helpful with us, they have been good cops around here. You do not hear too many incidents of injustice with them.

“Back in the day there used to be some racial profiling, stuff like that, plenty of people can tell you that. But for the most part I have spoken with the police chief and he was very helpful in making sure this event would go off peacefully,” Bell said.

The young man said he wanted the community to come together for the fair treatment of everyone.

He said that before the June 7 event took place, some people were trying to paint it as something that would not be peaceful. Bell said he tried to keep everyone calm and told people the event needed to take place peacefully.

“We needed to let people know in Jackson we are good people. This town is labeled a racist town – if you are not from here, if you live outside here and you just heard about Jackson a lot of people are going to say they are going to have racist people there. I have lived here for 18 years and that is not something I like. I want to say I come from Jackson, a place where everybody gets treated equally,” Bell said.

Jackson Police Chief Matthew Kunz thanked Niblack and Bell for their respectful and transparent collaboration with the Jackson Police Department in organizing and hosting the event.

“It is important for a community and the law enforcement agency that serves them to be well engaged, not simply during an emergency or in times of crisis. Our nation has a long history not only of  authoring laws intended to ensure equality, peace, prosperity and tranquility, but also for organizing to exercise these principles and rights,” Kunz said.

The police chief quoted James Madison, the fourth president of the United States, who said, “No nation can preserve its freedom in the midst of continual warfare.”

“That sentiment could not ring more true than at the present, when groups such as this one today rally for peace,” Kunz said. “I stand with you today, on the common ground that the men and women of the Jackson Police Department, the elected officials of the township and all of our community members share in the belief in our constitutional concept that all men are created equal.”

He said the words of the U.S. Constitution remain as important, “if not sacred” today as they did in the 18th century.

“Our mission as a police department today is not simply to support peaceable assembly, but also to stand with you, to stand with everyone who supports our God given right to enjoy equality and peace. So again, thank you for your message of peace today, and may God bless us all as we carry that message forward,” Kunz said.