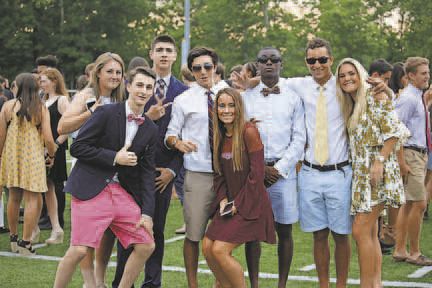 Headmaster William S. Hawkey, Ph.D., granted diplomas and certificates to the 99 members of the Pennington School Class of 2020, doing so online for the first time in the school’s 179-year history.

The Class of 2020 includes students from three states and 11 countries outside the United States. Deep M. Patel of Yardley, Pennsylvania, and Maria D. Khartchenko of Princeton Junction were valedictorian and salutatorian, respectively. The commencement speaker was Cecilia E. Rouse, Ph.D., dean of Princeton University’s Woodrow Wilson School of Public and International Affairs. Senior prizes were announced online the day before graduation, which took place on June 6, according to information provided by the school.

Patel, a National Merit Scholarship finalist, earned a certificate in applied science and senior prizes for excellence in mathematics, science, and computer science. He will attend Carnegie Mellon University next year.

Khartchenko received senior awards for excellence in English and in German, as well as a certificate in applied science. She will attend Princeton University.

The Headmaster’s Award to the Best All-Around Student, recognizing “that member of the senior class whose distinguished scholarship and dedication to a variety of extracurricular activities has set a memorable example for us all,” was shared by Patel and Jenna E. Y. Soliman of Hamilton, according to the statement.

Soliman was also among the five seniors awarded the Gateway Prizes, given to the seniors who best exemplify Pennington’s core values of honor, virtue and humility. The others are Ian C. de Albuquerque of São Paulo, Brazil; Elise F. Hawkey of Pennington; Kofoworola I. Jolaoso of Lagos, Nigeria; and Jordan C. Matthews of Lawrenceville.

Three teaching prizes were presented to members of the faculty. The Henry and Selma Otte Distinguished Teacher Award, given annually to a full-time teacher with at least five years of teaching experience at The Pennington School, was given to Lida Castro, Ph.D., chair of the World Languages Department; she lives on the Pennington campus. English Department Chair Jordan Aubry, also a member of the residential faculty, received the United Methodist Church Exemplary Teacher Award. Karen Balerna of Pennington was presented the Robert E. Martini Award for Distinguished Teaching, given to one whose teaching takes students’ individuality into account and who makes a significant impact on students’ lives. Balerna teaches compensatory skills. In addition, residential faculty member and athletic trainer Caitlin Nielsen was given the Kie and Hija Ahn Award for Peace and Global Understanding.

A member of the Pennington School Board of Trustees, commencement speaker Rouse is the Katzman-Ernst Professor in Economics and Education and professor of economics and public affairs at Princeton University, as well as dean of the Wilson School. She joined the Princeton faculty in 1992 after earning her doctorate in economics from Harvard University, where she also completed her undergraduate work. After receiving her undergraduate degree, she studied at L’Université de Cheikh Anta Diop in Senegal. Rouse’s primary research interests are in labor economics with a focus on the economics of education. She served from 2009-11 on President Barack Obama’s Council of Economic Advisers and worked at the National Economic Council in the Clinton administration as a special assistant to the president from 1998 to 1999, according to the statement.

The Pennington School is an independent coeducational school for students in grades 6-12, in both day and boarding programs. The curriculum is college preparatory, with an emphasis on individual excellence, fostering the development of the whole student through academics, athletics, community service, and the creative and performing arts. For more information, visit www.pennington.org.