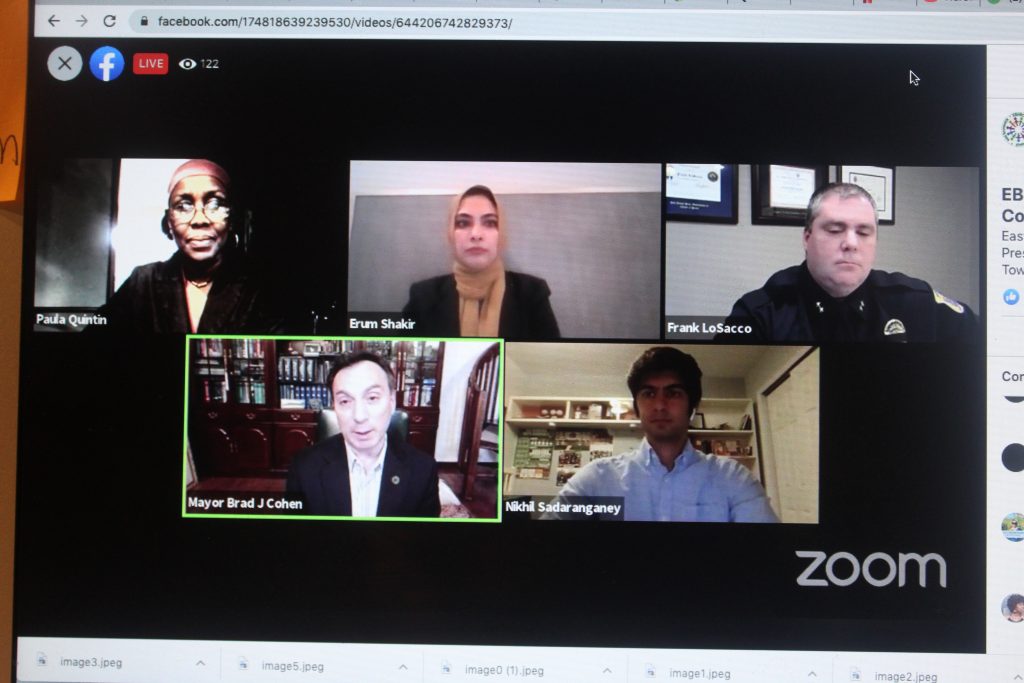 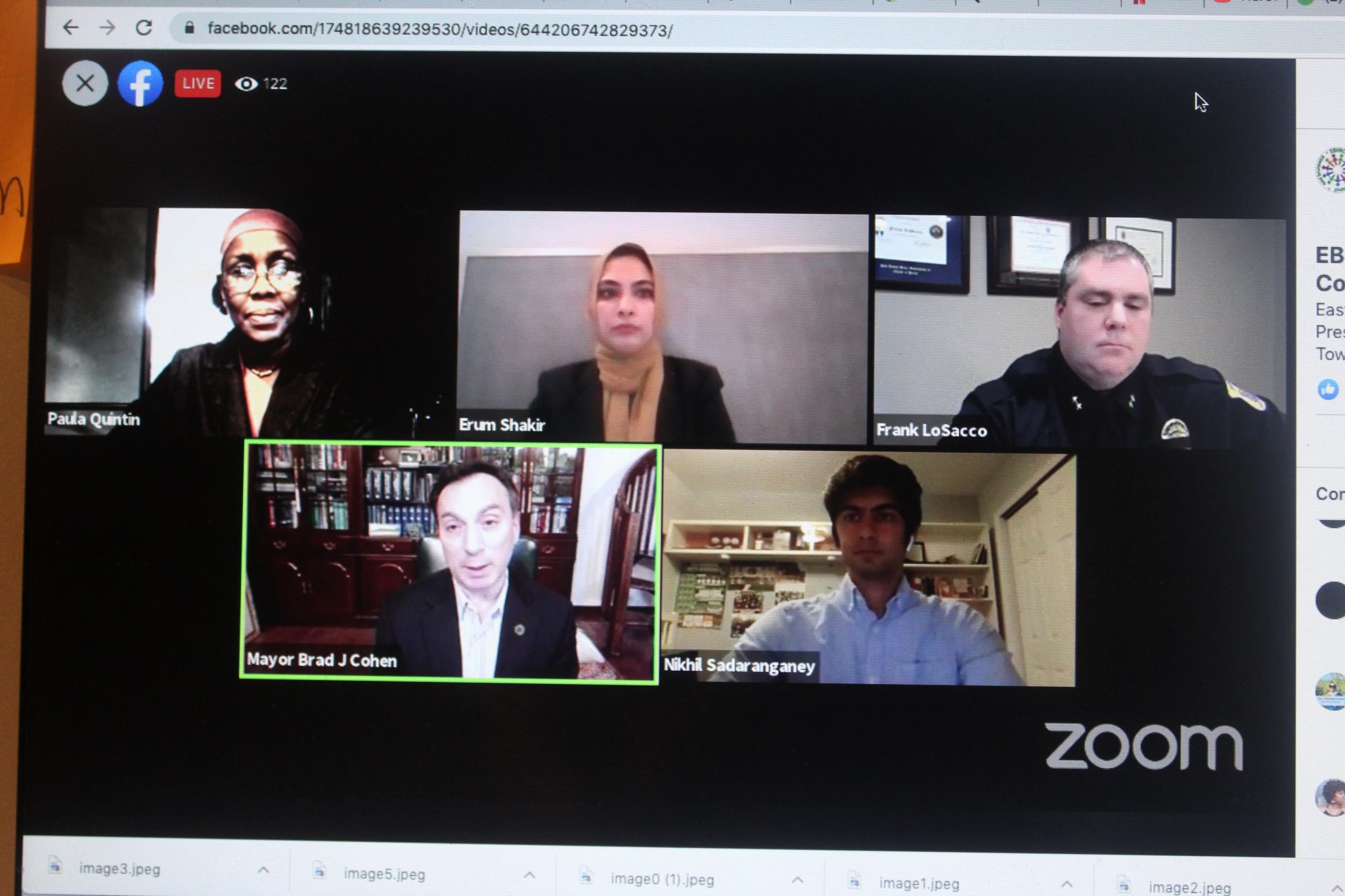 Floyd was an unarmed African American man who died after Minneapolis Police Officer Derek Chauvin knelt on the back of his neck for almost nine minutes.

After seeing the events that were taking place around the country, LoSacco said he immediately contacted the EBHRC to help set up the event to inform residents about the police department’s bias training, community policing programs and the department’s hiring process.

“Our goal this evening is to make sure that we …t ry to do the best we can to put people’s minds at ease, to know that we’re doing the right thing,” Cohen said. “With that having been said, it all really starts at the top and clearly what I mean starting at the top means township, government and public safety. We need to be a partnership and that has always been my No. 1 goal and the No. 1 goal of the council that represents you.”

In August 2019, Cohen said he, with approval from the Township Council, chose to appoint LoSacco as the new police chief. LoSacco has been a member of the police department for 31 years, and he grew up and lives in the township.

When choosing a new chief, Cohen said the township wanted someone who had experience in community policing, which he believes sits at the core of making people comfortable with knowing that their police are one of them.

“I wanted somebody who would do everything possible to lead a unit that would never tolerate any of the actions, language or behavior that we’ve seen, and are witnessing right now across the country,” Cohen said.

Sadaranganey asked both LoSacoo and Cohen what their reactions were to the events that are taking place in Minnesota.

“I will tell you, it shocked me to the core. Like the mayor said, I’ve been in law enforcement for 31 years and you see some things from time to time. As police, we always judge things based on the facts that are present with us,” LoSacco said. “There’s nothing that I saw that would make me think that this was not a totally barbaric act of criminal behavior. Nobody I’ve ever talked to and searching in my soul would ever think about endorsing something like that.”

LoSacco said the horrible actions by Chauvin and the other three officers are not indicative of the hard and dedicated work that the police in East Brunswick do.

“It’s shocking, unacceptable, and what’s more shocking and unacceptable is the fact that officers stood by and allowed that to happen. That’s nothing like I would ever see in the Township of East Brunswick and if anything came close to that, I would clearly take the quick and decisive action and remedy that,” LoSacco said.

“It just kind of rocked me to the core, it’s sickening. I come from a family, many of whom are Holocaust survivors, and so for us to see people treated so inhumanely after having an ancestry and family that’s been rocked by similar type of intolerance and racism just really hits me to the core,” Cohen said. “I think it points out an underbelly of racism that still exists in this country. We have a long history of poor treatment to African Americans all the way back to slavery. … This is just evidence that we haven’t really finished with fixing that problem.”

Cohen said there are police officers who are overwhelmingly good people who swear their lives, take an oath and devote their entire careers to public safety. Unfortunately, that’s being hijacked by a few perpetrators within the ranks, who are nothing short of racist, impulsive and power-hungry people who they don’t represent law enforcement.

Walcott-Quintin asked LoSacco what training EBPD officers have on implicit bias and de-escalation.

Starting with its extremely competitive recruitment process, LoSacco said the police department might have one or two positions and receive between 300 or 400 applicants. During the selection process, a background investigation is done and the people in the candidate’s life are also interviewed. After the EBPD conducts psychological testing, the candidate is sent for a psychological evaluation by a physician.

Depending on the results of the candidate’s evaluation, LoSacco said he or she will also come before for an interview panel, in which a series of questions asked, some of which will put the candidate under stress.

“A lot of [the questions] are going to test you in the area of your prejudice and bias fuse. That alone right there, before you even get a uniform, goes a long way of identifying cracks in the foundation,” LoSacco said.

If all that is acceptable, LoSacco said the candidate will go through basic police academy training which administers block instructions on communications techniques, cultural diversity, de-escalation techniques and use of force.

Even after all that training, LoSacco said recruits also have training outside the police academy that includes discrimination and racial profiling.

When a recruit graduates from the police academy, LoSacco said that officer is assigned to a training officer, where they ride alongside for quite a long time to evaluate how a recruit handles all types of situations. A lot of times, the recruit has to have a lot of de-escalation skills.

“Our agency is an accredited law enforcement, which means we have a whole set of policies and procedures that are in place to mirror what’s expected of the other most premier police department. We are accredited by the New Jersey State Association,” LoSacco said. “All those policies and procedures dictate the levels of force that police officers have to use in the case of procedural levels of force, like your mere presence in uniform.”

“it requires them to log into the system and indicate that this officer used the level of force. That immediate supervisor gets that entry and that report gets forwarded to his next level supervisor, which would be a lieutenant,” LoSacco said. “That lieutenant will then do another entry into that system, it’s called a meaningful review, which requires that lieutenant to go back and look at everything that happened during that encounter, and make a determination of if he or she agrees and believes that level of force was reasonably necessary in mind.”

Walcott-Quintin asked what reforms at the local, state and national levels can be put in place across the country to prevent instances of violence toward minority communities.

At a local level, Cohen said selecting the right person as chief of police is a most critical decision due to the chief often dictating everything that follows because police departments are almost paramilitary, working on a chain of command.

“You have to have a mission, that’s very clear on what the department stands for. You look like a hypocrite if the people that you pick and the culture that you display in your department is diabolically opposed to the mission statement that you have for that department. … I think that we’ve done an extraordinarily good job of trying to make sure that all of those things match up,” Cohen said.

Community policing is also important, Cohen said, because residents need to know that their officers, while they’re doing an important job, are exceptionally well trained and are just like them.

“The more our youth [and] the more the people that live here see those people as people that they could talk to, the person who’s going to be walking around the church, when services are on, they know that that officer over there is someone you’re going to bump into at the grocery store … and you know that you need to depend on somebody, these people are here for you,” Cohen said. “They’re working every day, they’re embedded and part of your community. In the end … I think you just have so much less likelihood of having these types of events occurring because you don’t look to the police or to law enforcement as your enemy.”

One of the department community programs, LoSacco said, is the Citizens Academy where officers from various divisions give lectures to educate residents about topics ranging from cultural diversity to how they write speeding tickets to how they treat domestic violence victims.

“So anyone that’s interested in the police department and what we do, this is a perfect opportunity to learn more because people walk out of there and they say, ‘I had no idea police officers had to get this level of education and training to do their job,'” LoSacco said. “They find that it’s not exactly an easy job and are often called upon to make split-second decisions that are life-changing for a lot of people, including the officers have to make decisions.”