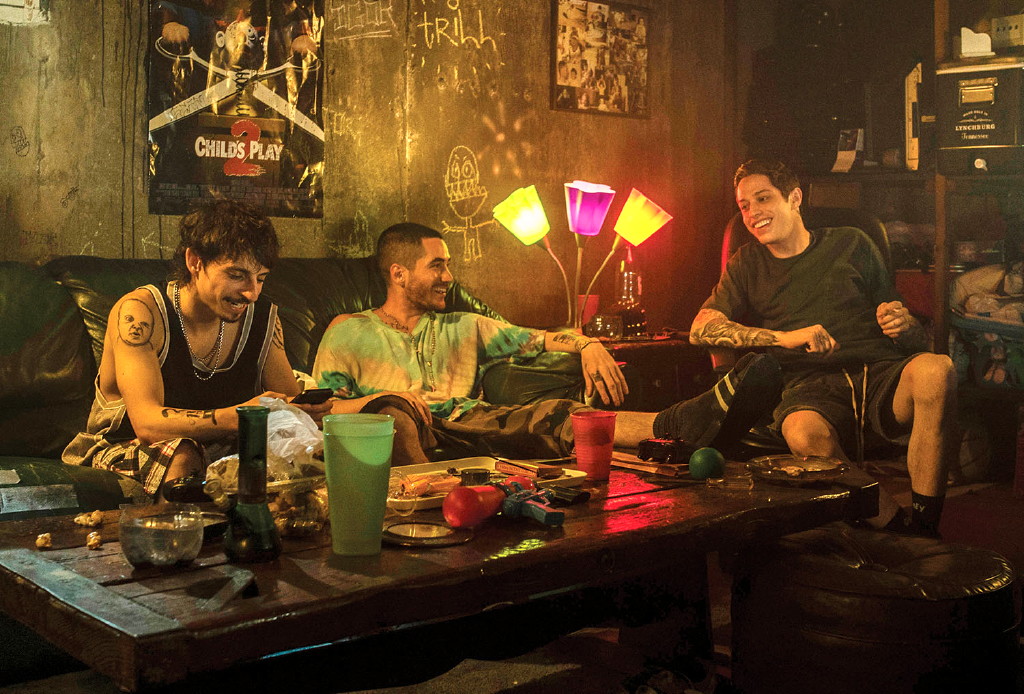 Tragedy. Everyone has different responses to life-changing events that emotionally devastate them. In the new film The King of Staten Island, Scott (Pete Davidson) is still coping with the loss of his father some 17 years earlier.

Scott spends his days endlessly wandering through life. He smokes excessive amounts of weed and hangs out with his friends with seemingly no purpose or motivation in his life. Kelsey (Bel Powley) is Scott’s secret hookup. She wants to go somewhere and just wants to be part of Scott’s life, but he is not ready for growth of any kind.

As Scott’s sister Claire (Maude Apatow) moves on to college, his new home life will consist of simply Scott and his mother, Margie (Marisa Tomei). That is, until a new man comes into her life.

Ray (Bill Burr) is a firefighter, and a chance meeting turns into a much deeper relationship and forces Scott to grow up and confront life as it lies. Will Scott grab life by the reins and make Staten Island his kingdom, or will he spiral further out of control? He loves his art and wants to start a tattoo parlor and restaurant, but it might just be another wild dream of his.

This is a fictional story that has some roots in Davidson’s own personal heartaches. His father was a firefighter who lost his life during 9/11 rescue efforts, which helps to create a personal story for him to draw on. And draw he does, delivering the best performance that I’ve seen out of the young comic and actor. My heart broke for the lost soul who is truly trying to find himself as he travels through the wilderness of life, and Davidson embodies his role, showing varied growth throughout the film.

Emotionally Davidson, Judd Apatow and Dave Sirus have written a piece that, while long and sometimes meandering, connects with viewers through the deepest of emotions. The humanity of the characters lets the jokes elicit genuine laughter and the emotions flow freely. From fear to happiness and sadness to hope, The King of Staten Island really connected with a wallop.

Director Judd Apatow gets solid performances from a slew of individuals who allow viewers a glimpse of a real Staten Island that has rarely been shown before. From the firefighter crew that included the amazing Steve Buscemi and their rendition of “One Headlight” to some of Davidson’s real-life friends and family, the film is filled with people whose performances never feel forced.

I hope Davidson succeeds as we go forward. As the son of a former volunteer firefighter myself, the emotion is real, the fear is real and The King of Staten Island is real. Judd Apatow creates a kingdom for Davidson that he rules with grace and humility. Long live the king.

Will there really be new episodes to watch this fall?

Back To The Booth