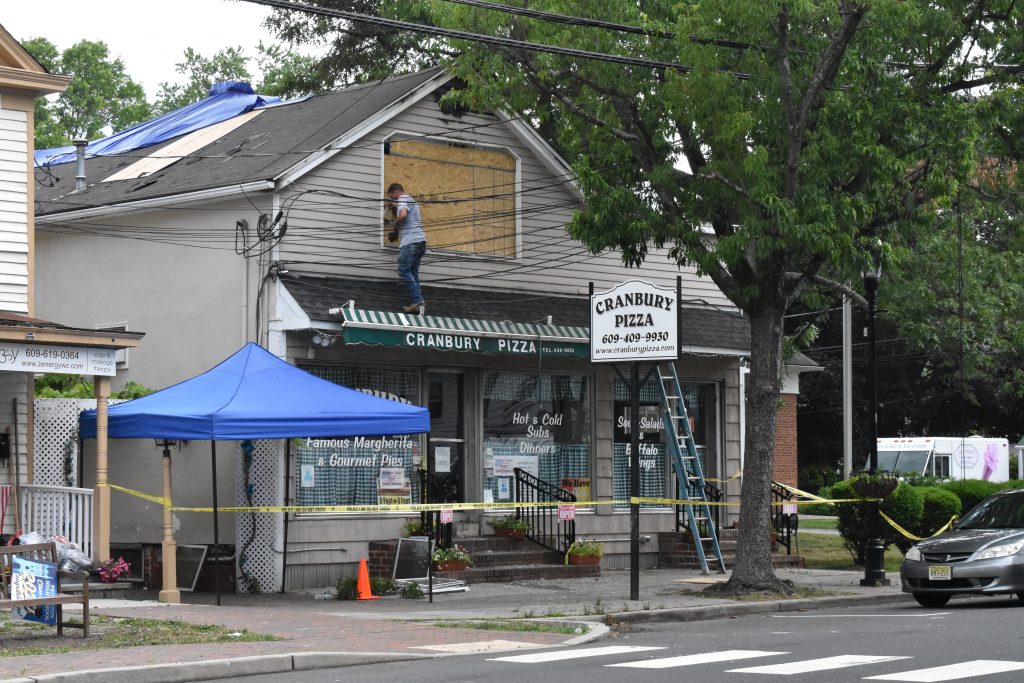 The building that housed several residents and Cranbury Pizza was destroyed by an evening fire in downtown Cranbury.

Cranbury firefighters, on June 19, battled the fire at Cranbury Pizza at the restaurant building located at 63 N. Main St. Firefighters responded to an initial call at 6:38 p.m. of fire at the building location.

According to Cranbury Fire official Sam DiStasio’s June 22 report to the Township Committee, upon arrival by the first unit smoke was found enveloping and coming out of the roof and the side of the building.

About eight different fire companies would participate in extinguishing the fire. Distasio said there was a lot of structural damage to the building.

“To gain control of the fire took a little more time with a fire such as that. We did have a little trouble finding where the fire was,” DiStasio stated to the Cranbury Press prior to his report.

At the time of the fire, current occupants included workers at the pizzeria and occupants in the apartments, which are part of the building.

The occupants living in the building who were affected included Denise Valdes and the Dario Parades family.

They were able to get out of the structure in time, according to the Cranbury Fire Department. There were no injuries to the occupants and firefighters on scene, according to DiStasio.

For Valdes and the Dario Parades family, a GoFundMe page created by Laura Zurfluh has raised close to $39,000 to help them get back on their feet.

“We are all devastated by the Cranbury Pizza fire that happened on June 19. Call out to how the town has really stepped up and shout out to fellow township committee members with getting $500 in the family’s hand by 9 p.m. that night,” Deputy Mayor Mike Ferrante said during the June 22 committee meeting.

“I told him that there really is no downtown Cranbury without Cranbury Pizza, so whatever we can do to help him make sure that gets done, I personally plan on doing,” he said. “I think this is really important.”

Teddy’s Restaurant has also come to the aid of the employees of Cranbury Pizza, who are now out of a job due to the fire. For the next two weeks, Teddy’s is donating 10% of all proceeds to the employees, according to the restaurant.

“I am sorry for the families who lived in the building and for the owners of Cranbury Pizza who gave so much to build a business in our town. I remember the excitement the first day Cranbury Pizza opened,” Committeeman James Taylor said. “Every resident I knew was excited to finally have a local pizza place of our own. My family and I, like many of our residents, are eagerly awaiting their grand reopening.”

This story will be updated as more information becomes available.