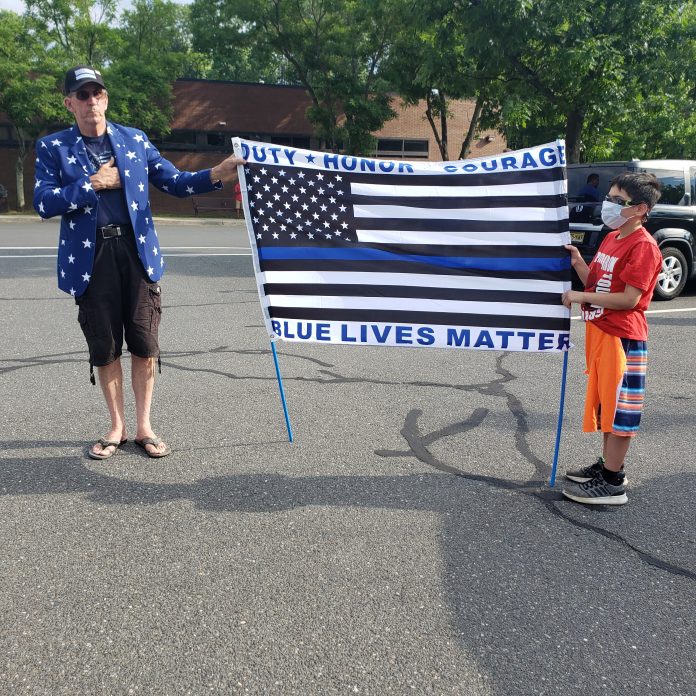 OLD BRIDGE – The officers of the Old Bridge Police Department are men and women, husbands and wives, mothers and fathers.

“We’re coaches, we have friends, we have families … we’re human beings,” said Vincent Galgano, who serves as president of Old Bridge Policemen’s Benevolent Association (PBA) Local 127 and has been a police officer for more than 20 years.

In the past three weeks in the wake of the events in Minneapolis, Galgano said police officers have gone from “heroes to zeros.”

Galgano also noted the township was named the 15th safest town in the country according to a recent study.

Resident George Gough organized a rally to support the Old Bridge Police Department (OBPD) and all good police officers across the country, which was held on June 25 in the municipal complex. The rally included music and people shared positive police stories. Many held signs including “Police Live Matters,” “Blue Lives Matter,” “We Back the Blue,” “We’ve Got Your Six,” “OBPD We Support You,” and “We Support Our Police.”

“We are here today to recognize the men and women who have left their wives, their husbands, sons and daughters and their safety of their homes to protect us,” he said. “They chose a career that is extremely dangerous, they wanted to protect, defend and serve a community and they chose Old Bridge.”

“Most of the calls are of the unknown, little information is given by 911 dispatch, but they have to be prepared for everything, they have to remember their training, stay calm and cool,” he said.

Gough said it breaks his heart what he has been seeing on the news and social media.

“I promise to stand here and defend and help any police officer in any situation in any time or day,” he said. “My greatest wish is for all police officers to always come home safe and sound.”

Cittadino shared what his Godfather, who served with the New York Police Department, 41st precinct in the Bronx, N.Y., would say to him when he asked about how his day was at work.

Cittadino said he is proud of the relationship the school district has with the school resource officers and OBPD, who keep all their staff and students safe.

Henry said as citizens of the country, parents and grandparents, they have an obligation to teach the younger generation to abide by laws in the country.

“My father raised me to know that no one is above the law and he also told me to pay homage to the flag and appreciate every day what that flag means,” he said.

Galgano said PBA Local 127 is composed of not just police officers, they are humanitarians.

PBA Local 127 recently awarded $5,000 worth of scholarships to township high school seniors; purchased equipment for township elementary schools; donated to the American Cancer Society’s Relay for Life for cancer research; purchased a pediatric wheelchair for a township resident; and in the midst of the novel coronavirus pandemic bought pizzas for residents struggling to put food on the table and donated gift cards to the Old Bridge Food Bank.

Resident Kimberly Finno said the rally is not just to support the OBPD, but to support every good law enforcement officer across the country.

“The only way to combat negativity online is to put all positive [stories] online,” she said, urging the public to keep sharing positive police stories.

During the rally, Gough, with the help of the many children at the rally, handed out gift cards from local restaurants and businesses to the police officers and their families. Attendees also, on behalf of PBA Local 127, were able to enter a free raffle.