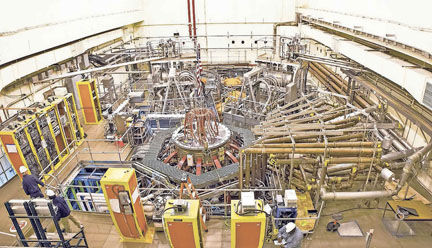 From fresh insight into the capture and control on Earth of fusion energy that drives the sun and stars, to the launch of pioneering new initiatives, groundbreaking research and discoveries have marked the past year at the U.S. Department of Energy’s (DOE) Princeton Plasma Physics Laboratory (PPPL).

The laboratory has advanced on all fronts and is expanding into new ones, and Quest magazine reports on all the excitement around these activities, according to a prepared statement.

“The past highly productive and exciting year has laid the foundation for wide-ranging development of our laboratory’s mission,” Steve Cowley, PPPL director, said in the 2020 edition of Quest.

The research magazine summarizes in a short, easy-to-digest format notable examples of PPPL accomplishments over the last year and major new initiatives currently under way. Achievements and expansions Quest reports achievements and expansions ranging from the path-setting use of artificial intelligence (AI) to speed the development of safe, clean and virtually limitless fusion energy to the launch of a nationwide venture, the Princeton Collaborative Research Facility on Low Temperature Plasma, to advance understanding and control of the complex material — a dynamic source of innovation in fields ranging from electronics to health care to space exploration, according to the statement.

Also reported is PPPL participation in the DOE-supported Innovation Network for Fusion Energy (INFUSE) program — a new public-private collaborative program. No fewer than four of the first 12 INFUSE collaborations intended to speed the development of fusion energy are housed at the laboratory, and a PPPL researcher co-directs the overall program. Detailed exploration the laboratory’s detailed exploration of plasma physics, the state of matter that makes up 99% of the visible universe, covers particles thousands of time thinner than a human hair and astrophysical bodies of vast dimensions. PPPL scientists last year created the first cosmic jet to stream in a laboratory — an achievement that promises to improve understanding of the astrophysical jets that pour from stars and black holes.

“We certainly have a prolific and productive research staff at the forefront of their fields,” Jon Menard, deputy director for research, said in the statement, adding that PPPL scientists and engineers author around 300 papers a year in peer-reviewed journals.

Quest can be accessed at www.pppl.gov/quest.

Princeton Plasma Physics Laboratory, on Princeton University’s Forrestal Campus in Plainsboro, is devoted to creating new knowledge about the physics of plasmas — ultra-hot, charged gases — and to developing practical solutions for the creation of fusion energy. The laboratory is managed by the University for the U.S. Department of Energy’s Office of Science, which is the largest single supporter of basic research in the physical sciences in the United States, and is working to address some of the most pressing challenges of our time. For more information, visit energy.gov/science.