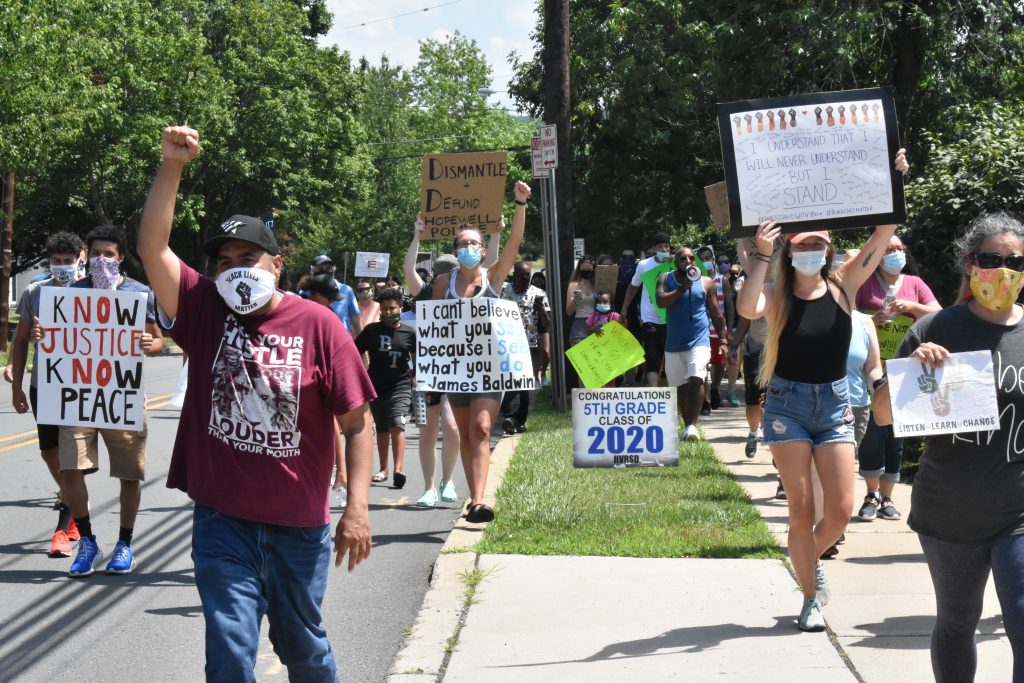 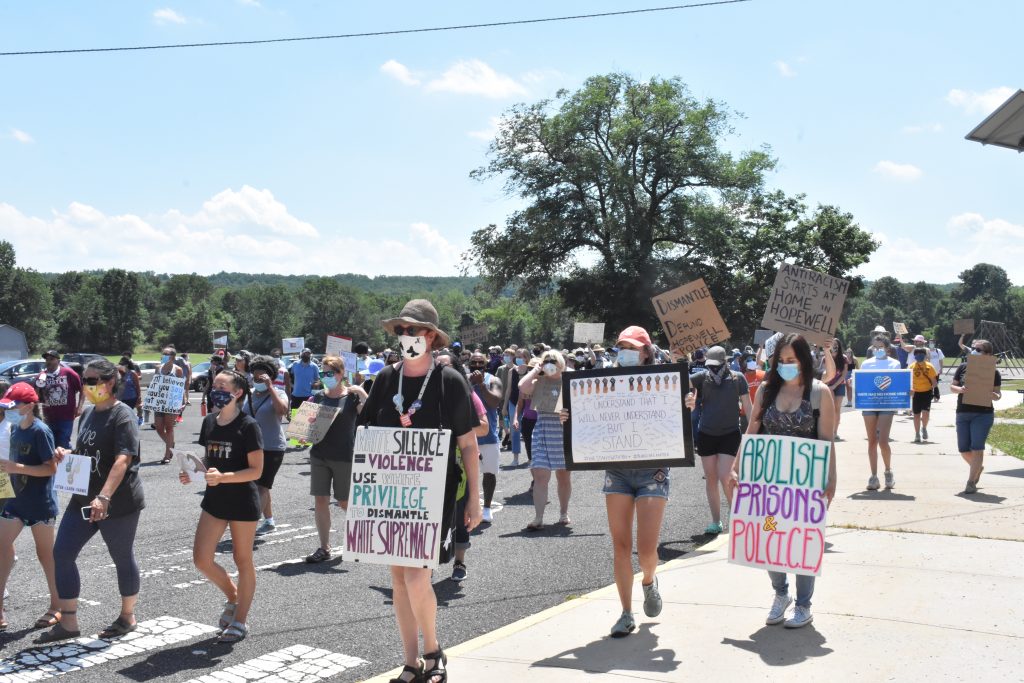 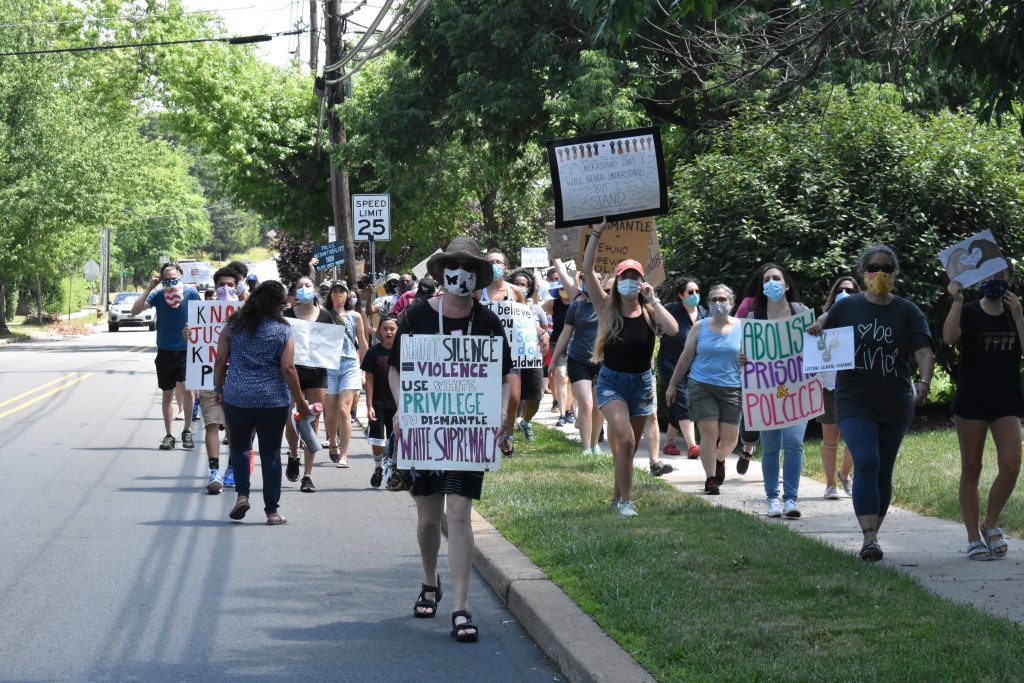 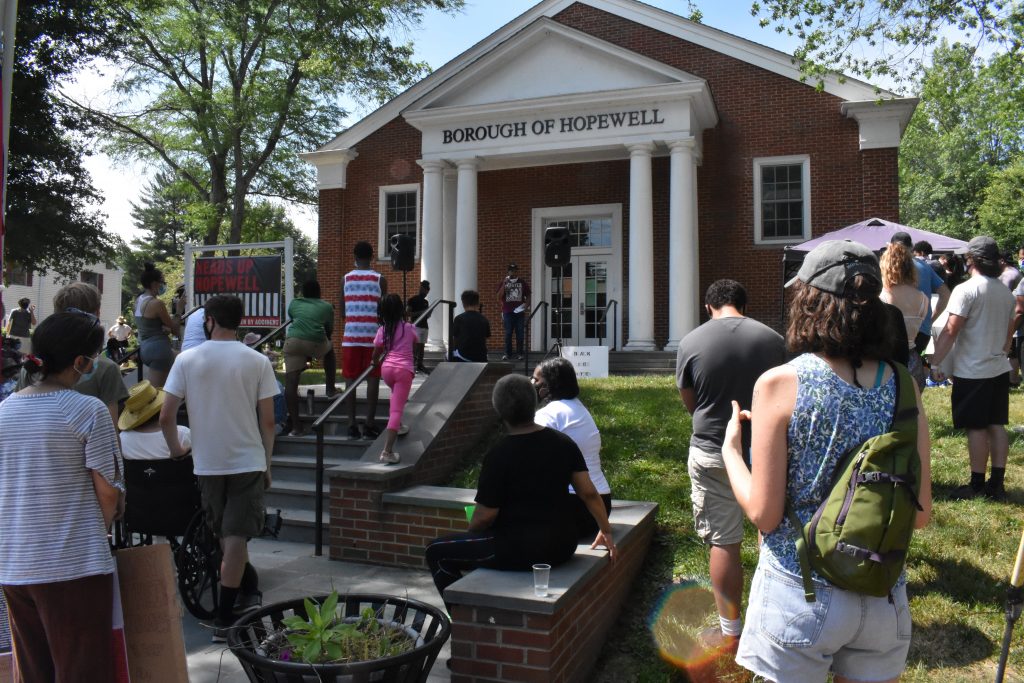 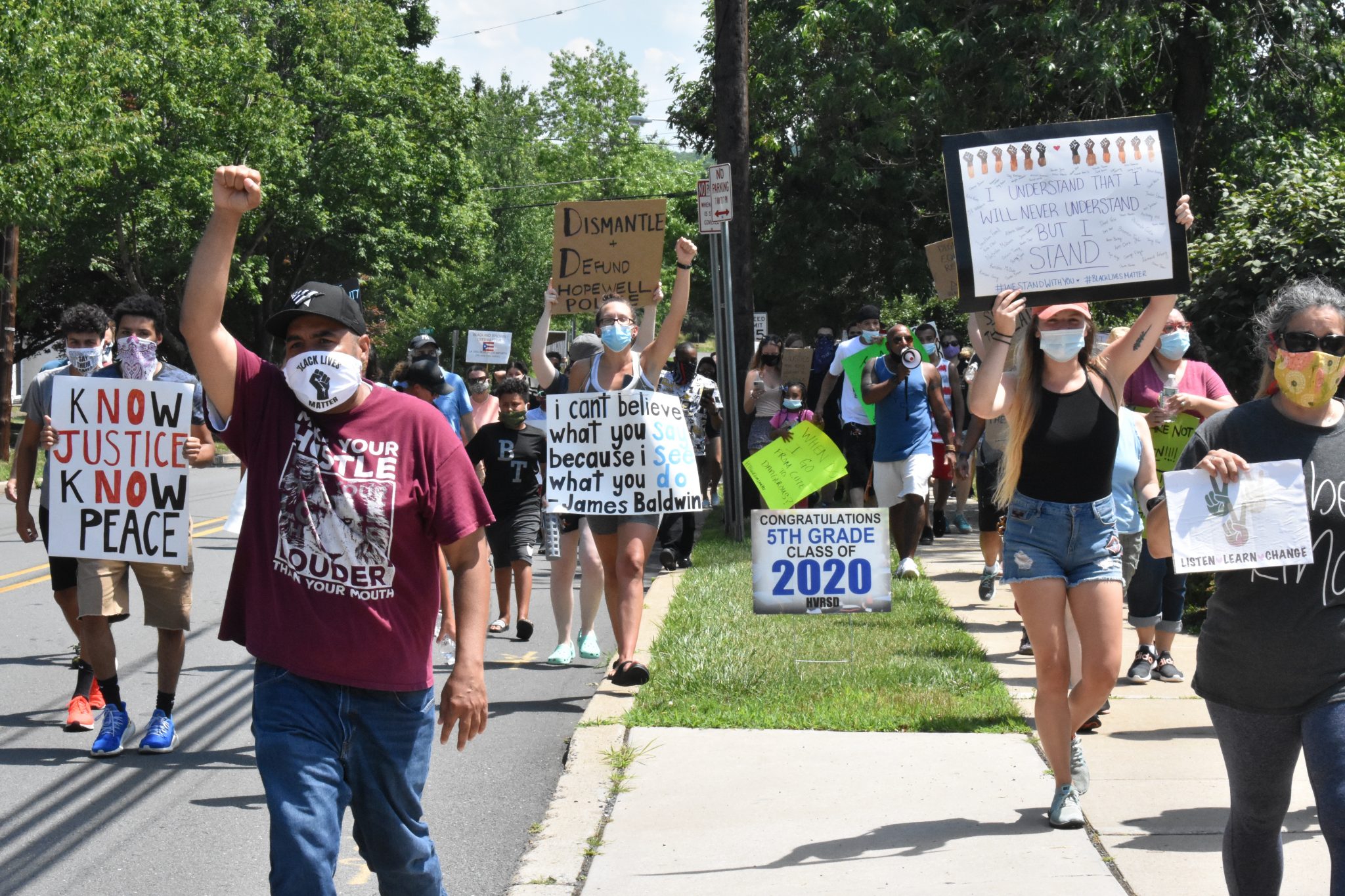 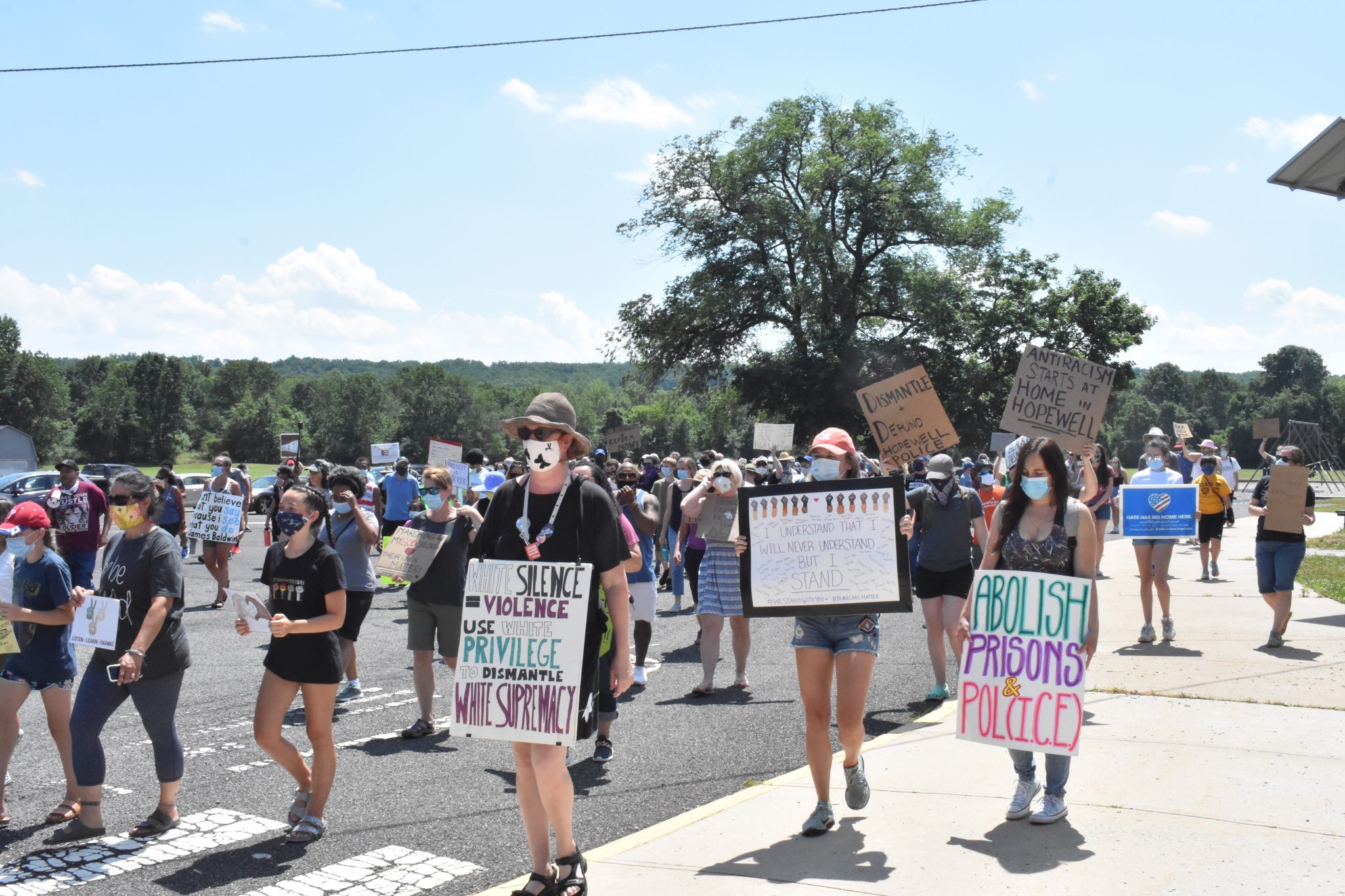 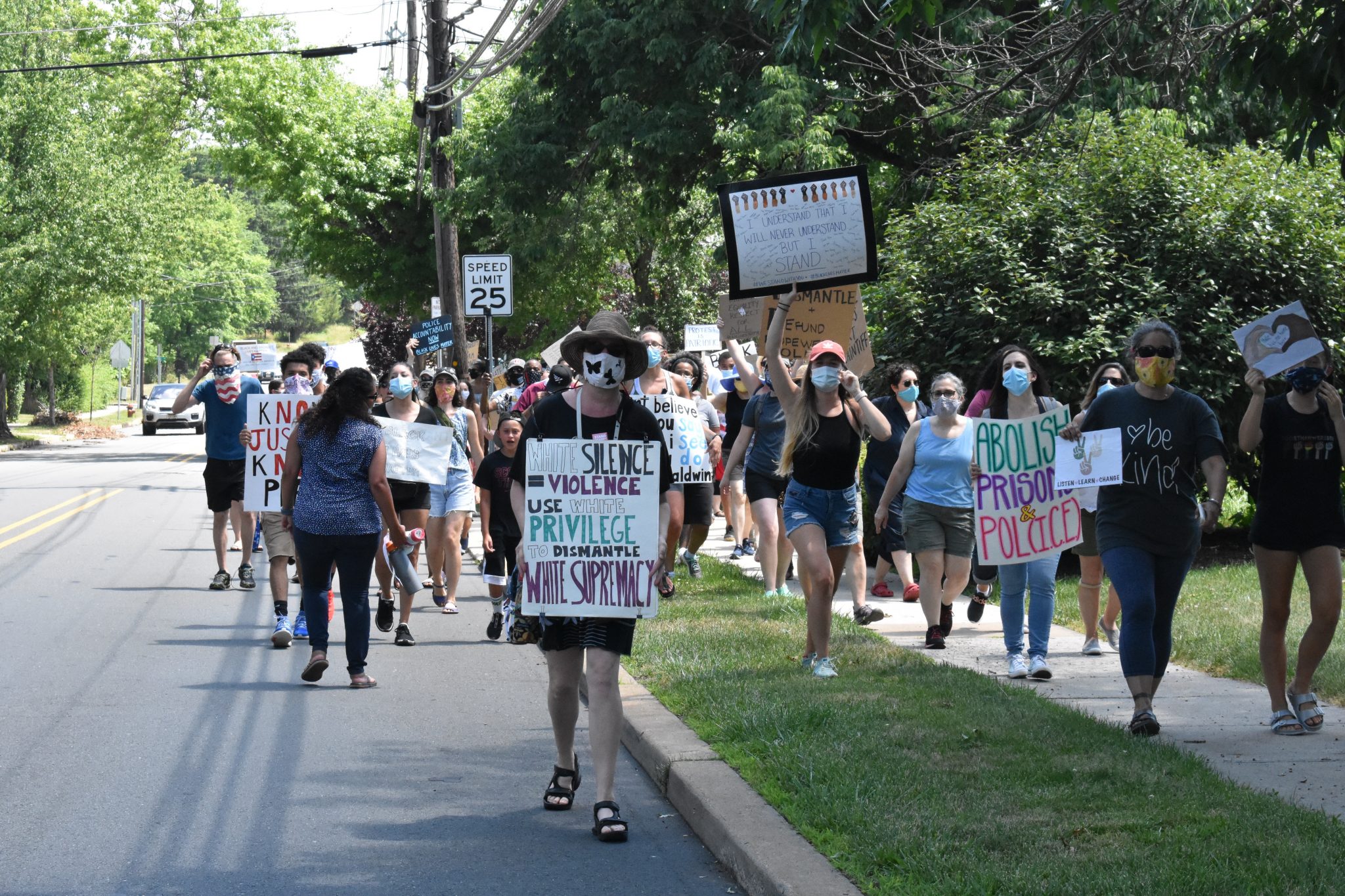 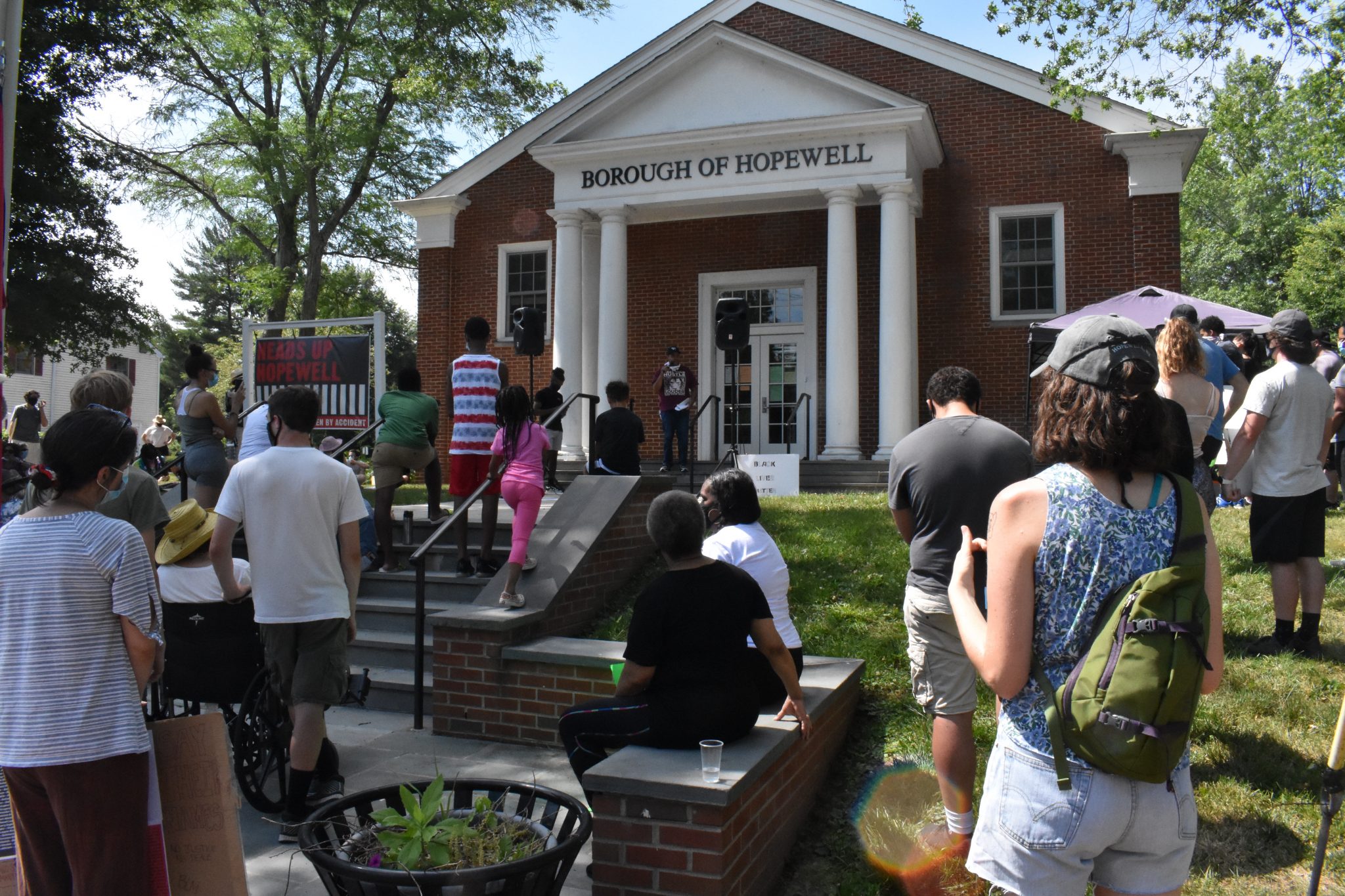 More than 100 people marched from Hopewell Elementary School to Hopewell Borough Hall to call for police accountability within the valley.

The call for accountability arose as investigations continue into improper social media conduct by Hopewell Township police officers and employees. The protest also spotlighted Sgt. Michael Sherman of the Hopewell Township Police Department, who filed a lawsuit in 2019 against the department alleging years of harassment and racist comments he experienced as an officer.

“We are not being heard. We are not getting answers to our questions and the township is hiding behind litigation. I get if you can’t answer a certain question, but you can answer what the people are asking specific questions with regards to what is happening with race in the township and the borough,” said Paul Pierson, brother-in-law of Michael Sherman and organizer of the rally. “What we are saying is, why is Michael Sherman’s litigation even happening. The incidents were reported and ignored. That is the real issue.”

The protest also comes after a Hopewell Township Committee meeting on June 22, where Hopewell Township Police Chief Lance Maloney presented to members and residents on the department’s data of traffic stops and use of force.

According to Maloney, township police officers’ largest interaction with citizens is through traffic stops. The department conducted more than 5,800 motor vehicle stops from 2014-19 in Hopewell Township and Hopewell Borough.

During the presentation, he stated that the department would attempt to publish monthly traffic stop data on the police department’s website page.

“The data presentation is what I expected and anticipated just from what I have seen in other townships in what they are presenting. When the population is not as diverse as it should be, if the pollution is 80% White, 5% Black and then other, it is what it is,” Pierson said. “We want to see different stats. We want to see stats broken down by officer and who is pulling over that 22% of the Black driver traffic stops. Twenty two percent is awful high for a population that is 5% of the community.”

Pierson added that he wants the police to be accountable and transparent.

“If mistakes were made, take ownership for the mistakes made. Ownership is not being taken,” he said. “We need the department cleaned out, starting with Chief [Lance] Maloney at the top. We are asking for his resignation.”

When families and residents of Hopewell Valley marched in Hopewell Borough they chanted “Black Lives Matter,” “No Justice, No Peace” and “These Racist Cops Have Got to Go.”

“Yesterday I saw professional women soccer players Julie Ertz and Casey Short crying on the field as they took a knee during the national anthem and I was crying with them. This is all coming to a head and it is 400 years too late,” said Anita Bhala, Hopewell Township resident. “I want to see legislation and accountability come out of demonstrations like today. It is encouraging and inspirational to see older and younger generations out here fighting for change.”

Standing up for her neighbors is what brought Pennington resident Stephanie Overton-Hall to the afternoon march and rally at Borough Hall.

“I think it is important to do so. It is not OK that Hopewell has a reputation as being a racist township. I have been here for seven years and it is well past the time that we make changes,” she said. “I am going to stand up and fight for a different Hopewell that embraces everyone.”

Overton-Hall was one of the speakers during the protest rally and wanted to speak directly to White people gathered in the audience at the rally.

“We have to get comfortable with being uncomfortable. We need to take those actions that we have not taken,” she said “We can’t sit on the sidelines, we have to make changes, and encourage others to do so.”