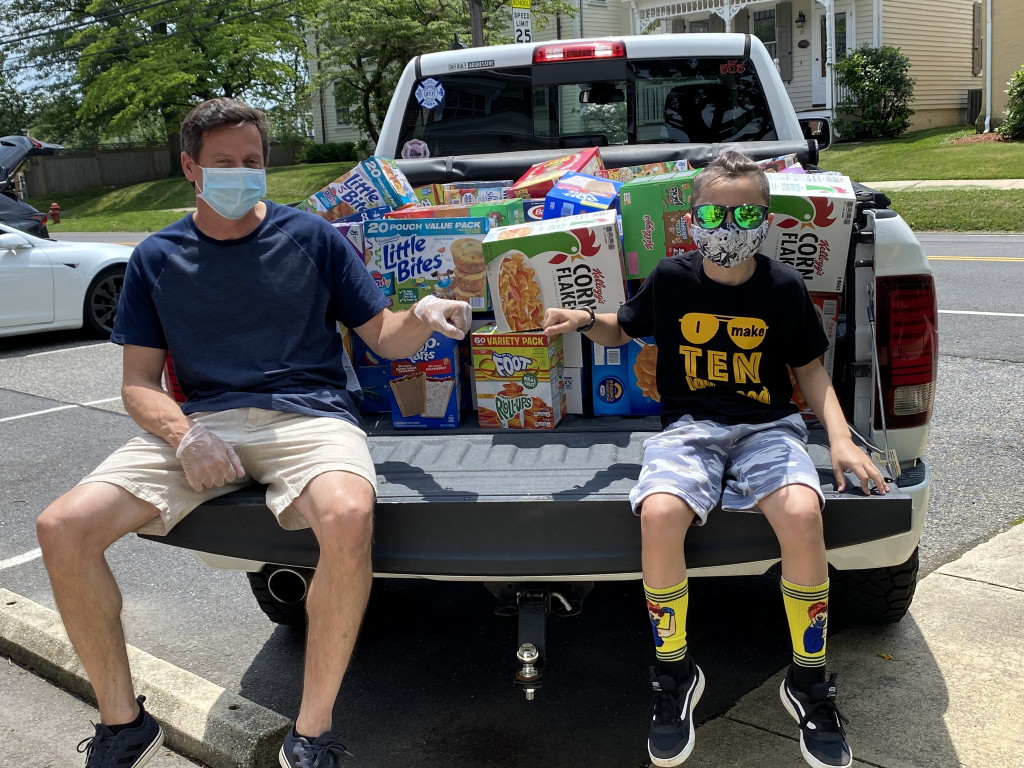 ALLENTOWN – To celebrate his 10th birthday, Finn Piparo of Allentown collected $2,500 in donations and lent a helping hand to assist a food pantry in his hometown.

Finn, who is the son of Robert and Tracey Piparo, and the brother of Dex, 7, used the money to purchase items that were donated to the Allentown Food Pantry at the Allentown Presbyterian Church in early June.

The food pantry has seen an increase in the local need for assistance during the 2020 coronavirus pandemic that has left many individuals unemployed.

In recognition of Finn’s unselfish action, the members of the Allentown Borough Council recently passed a resolution honoring and commending the young man.

According to Lisa Boss and Sandy Carduner, representatives of the food pantry, Finn’s original goal was to collect $1,000.

“Finn is an amazing young man who, in lieu of gifts for his 10th birthday, wanted to raise $1,000 to donate to the Allentown Food Pantry,” they said. “He actually raised $2,501, exceeding his goal by $1,501. Finn and his family then went shopping for much needed items for the food pantry.”

Finn said his inspiration to collect donations came from his aunt, Barbara Piparo-Walls.

“One day, my Aunt Barb came up to me and said, ‘Would you like to donate to a food pantry for your birthday? I immediately said yes,” he explained.

“We had been thinking of things to commemorate Finn’s 10th birthday, since it obviously would not be a traditional celebration,” Tracey Piparo said. “With parents who were still working regular hours as providers during the pandemic, Finn had heard many stories of people being out of work and needing assistance.

“Finn didn’t hesitate when his aunt made the suggestion (to assist a food pantry) and he immediately began thinking about ways to get the word out,” she said.

Piparo said the family collected donations in their driveway from neighbors and also received monetary donations. Once the money was collected, Piparo said, she and Barbara went shopping for items the food pantry needed the most.

“We collected non-perishable food like cereal, noodles, chili, soup and gift cards,” Finn said. “It was all delivered in my dad’s pickup truck.”

“Finn was very particular about making sure we got good snacks for any kids who might be using the food pantry, and also cereal,” his mom said.

According to Boss and Carduner, Finn’s efforts resulted in 1,024 pounds of food and $1,000 in ShopRite gift cards being delivered to the food pantry.

“Even from an early age, Finn was the most empathetic child I have ever encountered,” Piparo said. “He has an innate sense of other people’s feelings and emotions, and he was truly happy just to be able to help. He cried when he saw all the food piled in the garage.

“His dad and I would like to say how proud we are of him, mostly of his humility surrounding the whole thing. He met daily with his class, played online games with friends and was never boastful about what he was doing. His dad actually emailed his teachers to let them know.

“We were humbled by being able to help those less fortunate, especially now, and we were happy about being able to share it with our boys. Even Dex understood the big picture when he saw the food pantry and all the bags packed for those who needed them,” she said.