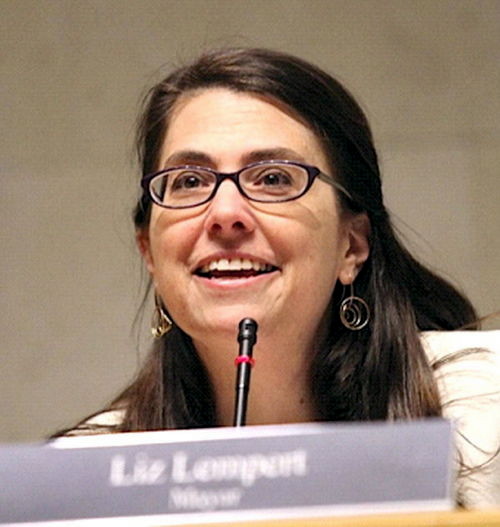 When you tell your friends and colleagues that you are retiring one year before you actually leave, that last year at work often can assume a laid-back and relaxed quality. At the Jan. 2 Princeton municipal reorganization meeting, Princeton Mayor Liz Lempert announced that she would leave her Princeton mayoral position on Jan. 1, 2021. Mayor Lempert, however, had no intention of fulfilling her last year in office in a non-energetic manner.

“This isn’t goodbye yet for me,” she said at the reorganization meeting. “A year is a long time, and I look forward to a supercharged year with this energetic council.”

It turns out that 2020, thus far, has been about as laid back – as lying back on a bed of nails. Working seven days per week for the past several months on COVID-19 and social justice issues, Liz has expended energy and faced stress in a way that goes far beyond anyone’s definition of “supercharged.” She may be “exhausted but is still positive and hopeful” about the future of the Princeton community.

“We are so lucky – this is just an amazing and inspiring community. The people energize me,” Liz said. She recounted the numerous “extraordinary” ways in which Princeton’s residents and its institutions have created and implemented initiatives to help people made very vulnerable by this pandemic, while simultaneously mobilizing to support justice for all and to help eliminate systemic racism.

Before COVID, I thought I would interview Liz about her eight years as mayor and four years as township committee member by focusing on what I would consider a key element of her legacy – implementing municipal restructuring through consolidation. On Jan. 1, 2013, she became the first mayor of Princeton, the “new” municipality comprising the former Princeton Borough and former Princeton Township. In her calm, wise and steady manner, she guided the Princeton ship through the choppy and complicated waters of consolidating municipal departments, such as the police department, as well as syncing the numerous zoning ordinances and regulations, particularly the ones dealing with parking.

Then COVID-19 invaded and upended life throughout the world and of course in Princeton. The pandemic wiped out not only recent angst over parking meters and road repairs, but also any discussion of Mayor Lempert’s legacy. In addition to consolidation, Mayor Lempert’s legacy would include bicycle mobility, environmental sustainability, community inclusiveness, and town/gown relations.

Instead of being beaten down by the traumatic circumstances of 2020, Liz has focused her efforts on making sure that Princeton will come out of all this as a stronger and more just community. And in my opinion, her infectious positive attitude and intense caring define her legacy more than any one issue. She ticked off multiple ways in which Princeton residents rallied and collaborated to organize relief efforts. Two excellent examples of superb COVID relief initiatives, she said, are the Princeton Children’s Fund and the Princeton Small Business Resiliency Fund.

Princeton Children’s Fund (PCF) pre-COVID was organized around the mission of providing access to enrichment for Princeton Public School students whose families are unable to afford the extracurricular opportunities.

Post-COVID, PCF is like a Transformers toy: becoming a super hero of COVID relief by creating a COVID relief fund. The Coronavirus Emergency Relief Fund is supported with grants from the Princeton University Relief Fund, the COVID-19 Relief & Recovery Fund of the Princeton Area Community Foundation, and 810 individual donors.

The mayor also is optimistic about the business community’s ability to recover from the COVID economic trauma thanks to a brand new business relief fund.

To support small businesses in Princeton, Princeton University is making an initial contribution of $250,000 to the Princeton Small Business Resiliency Fund (PSBRF). This new relief program, formally launched on June 25 with the university’s contribution, was devised through the leadership of Lempert and Council Member Michelle Pirone Lambros in coordination with the Princeton Mercer Regional Chamber of Commerce Foundation.

The university’s initial contribution to PSBRF of $250,000 will be augmented by its dollar-for-dollar match of the next $100,000 in additional contributions to the fund. Individuals interested in supporting local businesses in Princeton may contribute to PSBRF by mailing a contribution to the fund: c/o Princeton Mercer Chamber of Commerce Foundation, 600 Alexander Road, Suite 3-2, Princeton 08540.

The community has been equally impressive, Liz said, in its response to the issues of racism and social justice. Princeton’s non-profit organizations (religious and secular), political groups, for-profit corporations, government entities, and concerned but unaffiliated citizens cooperated to produce a powerful and unified response to the social justice and economic justice and racial issues. She noted the particularly inspiring event of the Princeton police and a group of Princeton’s Black mothers coming together on a recent Sunday to meditate and pray to put an end to racial injustices.

And just this past weekend, Liz said she was really heartened by Princeton University erasing the name of Woodrow Wilson from its internationally renowned public policy and public affairs school. University trustees concluded that President Wilson’s “racist thinking and policies make him an inappropriate namesake for a school or college. … Princeton is part of an America that has too often disregarded, ignored or excused racism, allowing the persistence of systems that discriminate against Black people,” in the words of Princeton University President Christopher Eisgruber.

Because of the intensity of the present, Mayor Lempert hasn’t given much thought or energy to her professional future. “I want to keep doing what I can do to mitigate the impacts of COVID, to have the town be an effective leader on the racial and social injustice arena,” and to take care of family issues, including honoring her father who died in March but has not yet had a memorial service.

“I care about a lot of issues such as sustainability, climate change and the whole spectrum of equity issues, but I mostly just care about Princeton and want to do what I can do to keep it moving forward in a positive fashion.” Liz noted that I sounded like her 89-year-old mother when I asked what she wants to do when she leaves office. I now conclude that the only answer I want to hear is that she chooses not to leave Princeton.

Opinion: Behrend’s character can be trusted