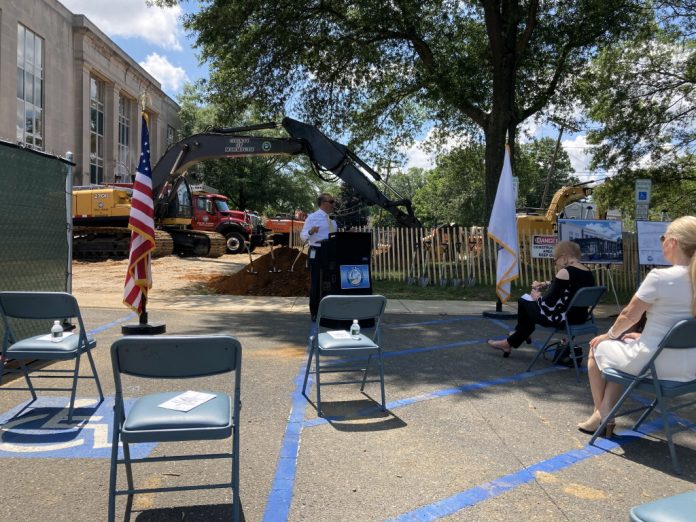 Construction has begun on an approximate $10 million expansion of the Monmouth County Courthouse. The project seeks to increase security measures at the building, which sits between Court and Monument streets in Freehold Borough.

A groundbreaking ceremony was held at the courthouse on July 9 to recognize the start of construction on the West Wing Security Vestibule, a new section of the courthouse that will screen individuals entering the building.

Security screenings are currently conducted in the entrance hallways of the East and West wings at the courthouse; these areas will be replaced by the expansion for all future screenings upon completion, according to county officials.

At the event, Monmouth County Freeholder Lillian Burry explained that the areas being used for security screening purposes were designed and constructed prior to the need for such screenings.

“The new security vestibule demonstrates the county’s commitment to the safety of the judges, jurors, public and the sheriff’s officers,” Burry said.

According to county officials, the expansion will cost about $10 million and is anticipated to be completed by the winter of 2022. It will be approximately 3,400 square feet in size and officials said it was designed to blend into the existing architecture and character of the building.

“It’s worth every dollar,” Freeholder Director Thomas Arnone said. “This is much needed in Monmouth County. Ensuring the safety of everyone who goes in and out of the courthouse is absolutely essential and the construction of this new security vestibule will help make that possible.”

Monmouth County Sheriff Shaun Golden said the new security vestibule will allow authorities to increase the number of X-ray machines in the building from one to three or four.

“This project provides needed security,” Golden said. “It is the constitutional duty of the sheriff’s office to protect the courthouse.”

“We judges often rely on the community,” Thornton said. “With this commitment, I speak not only for the judges, but for (everyone) who comes through these doors every day. We are forever grateful for this commitment.”

In addition to the construction of the West Wing Security Vestibule, the project provides for the reconstruction of the East Wing main entrance stairs, landing and handrails, along with the restoration of additional exterior entrance stairs throughout the building, according to county officials. All of the improvements will comply with standards enumerated in the Americans with Disabilities Act.

“We have a lot of work,” Arnone said. “This is an older building and it needs to be updated.”