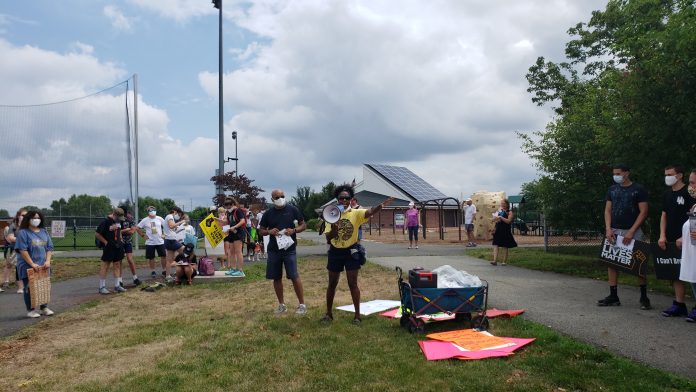 MILLTOWN – Katty Velez raised her bullhorn and rallied the crowd that gathered at David B. Crabiel Park before the peaceful protest march on Main Street.

“We are not here to argue with people, to make people change their minds today on the spot, that is impossible,” she said. “The only person you can change is yourself and hopefully by taking a stand you will help other people rethink [and ask themselves] what about this march is so important?”

Velez called on the people who attended “to be loud and obnoxious, to yell and scream.”

“I want people to know that we are not ‘OK’ with racism here or anywhere,” she said.

The people who attended marched on the sidewalks on Main Street towards Borough Hall. They chanted “No Justice, No Peace,” “We are One”, and “Black Lives Matter.” They also held signs “Black Lives Matter Period,” “White Silence is White Violence,” “I Will Not Remain Silent Because You Feel Uncomfortable or Offended,” “Hate Won’t Make Us Great,” and “Power in Unity, We Are One.”

Even four-legged furry friends participated in the march with signs including “I bite racists.”

At the peaceful protest in June, Mayor Trina Mehr announced the creation of the Human Relations Commission, which would promote social and cultural harmony and cultivate an understanding and acceptance in Milltown.

She challenged people to get involved, reach out to family and neighbors, and call out racist behaviors.