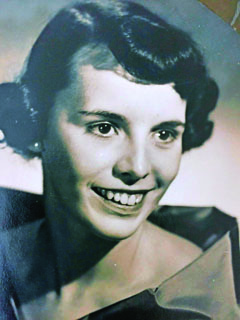 On July 22, 2020, Noël Lee Mann, loving and devoted mother, grandmother, and great grandmother, artist, genealogist, and nature enthusiast, passed away at the age of 89.

Noël was born in Staten Island, New York to Frederick Kramer and Dorothy (Clinckett) Kramer.  Noël was the eldest of four inseparable sisters.

Noël grew up in New Dorp, Staten Island, and married her high school sweetheart. After working in New York City, Noël and John enjoyed their move to the new scenery of Big Spring, TX where John served in the Air Force. They moved back to the Northeast, and settled in the Kendall Park, Belle Mead, and later, Princeton NJ communities, volunteering in her five children’s schools, local public libraries, and the Girl Scouts.

Noël began working at Princeton University in 1979 in the Biology, and later, Molecular Biology Department, as a Research Secretary, a position she enjoyed due to her interest in scientific research and discovery.  She continued working in the Molecular Biology Department at Princeton University / Howard Hughes Medical Institute as Dr. Shirley Tilghman’s Research Secretary until 1998.

Devoted to their family, Noël and John were great enthusiasts of family research and genealogy. Through their research, they discovered and visited relatives across the country and beyond, including Noël’s ancestral family home of Barbados.  Noël and John’s love of their extended family was realized in their organization of two large family reunions, with relatives joining together from all over the world.  Their love of family also included strong family traditions passed to their grandchildren and great-grandchildren, including spending Thanksgiving deep in the woods in rustic cabins in Pennsylvania, lighting the plum pudding on Christmas, banging pots and pans on New Year’s Eve, and finding fairy rings of mushrooms in the summer.  These traditions were captured in Noël’s acrylic and watercolor paintings.  Noël also had a vast knowledge of trees, plants, and animals found throughout the Northeast, and she was happiest sharing this knowledge with the little ones in the family while walking in the woods or exploring in her garden.

Her quest for boundless learning inspired Noël to enroll in the continuing education programs at Mercer County College well into her 80’s.  From ceramic classes to philosophy, Noël enjoyed learning new ideas and gaining knowledge at every age of her life.  The infinite possibilities of new experiences in the vast universe often led her to recite the quote by Robert Louis Stevenson, “The world is so full of a number of things, I’m sure we should all be as happy as kings.”

Noël’s Funeral Mass was live streamed through the Queenship of Mary Roman Catholic Church (Plainsboro, NJ) Facebook page on Wednesday, July 29th at 10:00 a.m.  The in-person service was restricted due to COVID-19 protocol.

Donations can be made to your local public library and their Bookmobile Services.