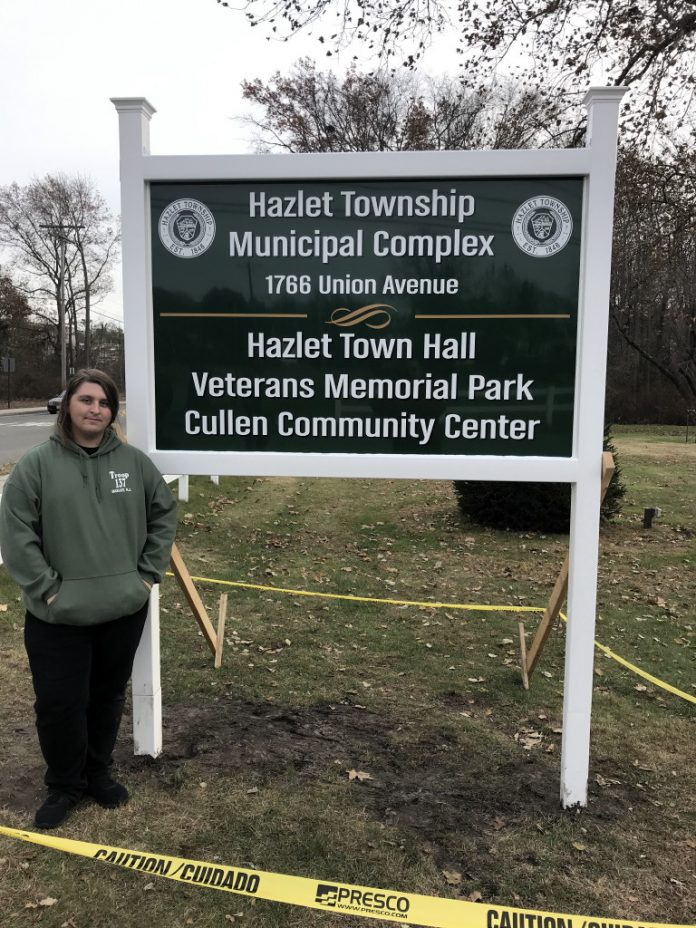 HAZLET – In the fall of 2019, Boy Scout James Simone set out on a mission to attain the rank of Eagle Scout. Reaching the highest rank the Boy Scouts award had been his dream since second grade.

At the time, the young man was 17 and a senior at Raritan High School. He is a member of Troop 137 which is chartered by Hazlet’s North Centerville Fire Company.

One project Simone embarked on was to replace the old, rotting wooden sign that sat outside the entrance to the James J. Cullen Center at the municipal complex.

On a day in November, Simone, his parents Toni and Jim Simone, and fellow scouts from Troop 137 knocked down the old sign and put a new sign in place at the Union Avenue location.

“Becoming an Eagle Scout has been a goal of mine since I joined the Boy Scouts,” he said this week. “It was a lot of work getting all the materials for the sign. I’m happy with how it came out and hopefully the sign will stay up for a long time.”

A date for an Eagle Scout Court of Honor ceremony for Simone has yet to be scheduled.

As part of the project, Simone had to obtain the necessary permits and municipal approvals for the new sign, which he designed. He helped to build the frame that holds the sign and he received assistance from a local sign maker, Michael Placko, with the project.

Simone held fundraisers at Cheeburger Cheeburger in Holmdel, at TGI Friday’s in Hazlet and at MJ’s Pizza Bar & Grill in Hazlet to help raise money for materials and tools. The fundraisers netted $659 and Simone contributed the last $30 that was needed.

The young man said people have complimented him on the sign and he said, “I hope it will reflect Hazlet in the right way.”

The other project Simone led on that November day was helping to collect and sort non-perishable food items for the RAINE Foundation’s annual Thanksgiving food drive.

A Thanksgiving Day basket is delivered to families in need and any left over items are donated to area food banks, he said.

Simone thanked the 35 members of Troop 137 who assisted him with both projects and said he could not have completed the projects without them.

“It was really great to see just how many people came out and helped me,” he said.

Simone has since turned 18, graduated from high school and is planning to study musical technology at Rowan University, Glassboro.

He said he has good memories of being a part of Troop 137 and said he hopes to remain active with the organization.

“Being a part of the Boy Scouts had the most influence on me. It made me who I am today,” Simone said.