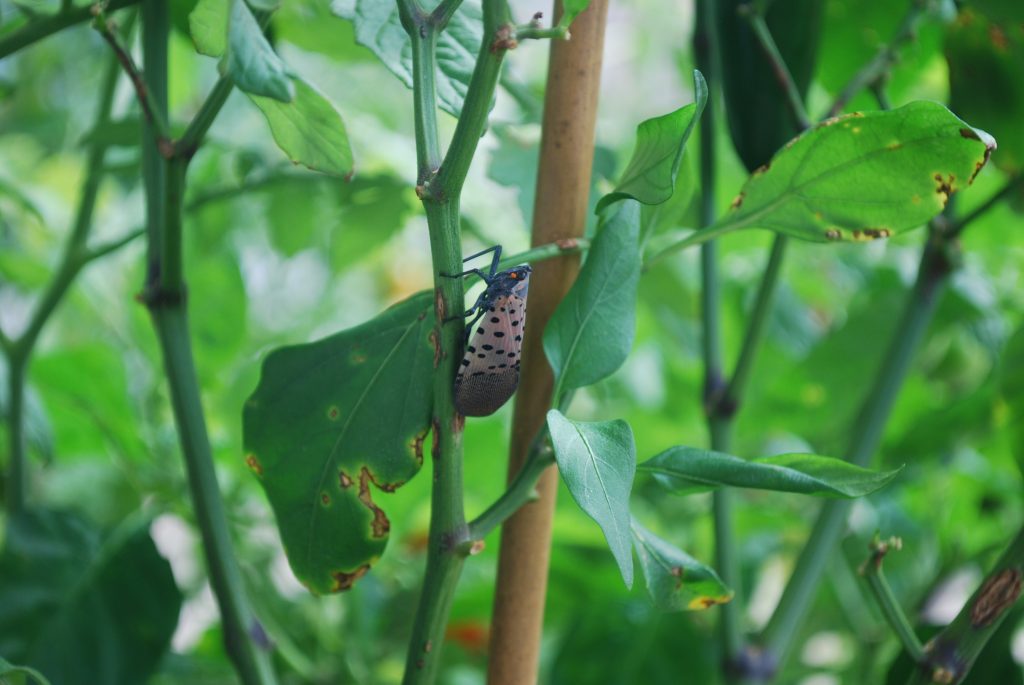 The invasive spotted lanternfly, a species native to Asia, Bangladesh and Vietnam, has made inroads into Burlington County within the last year. Experts recommend killing them on sight as they can be extremely damaging to trees and crops, too. RYAN LAWRENCE/THE SUN
× 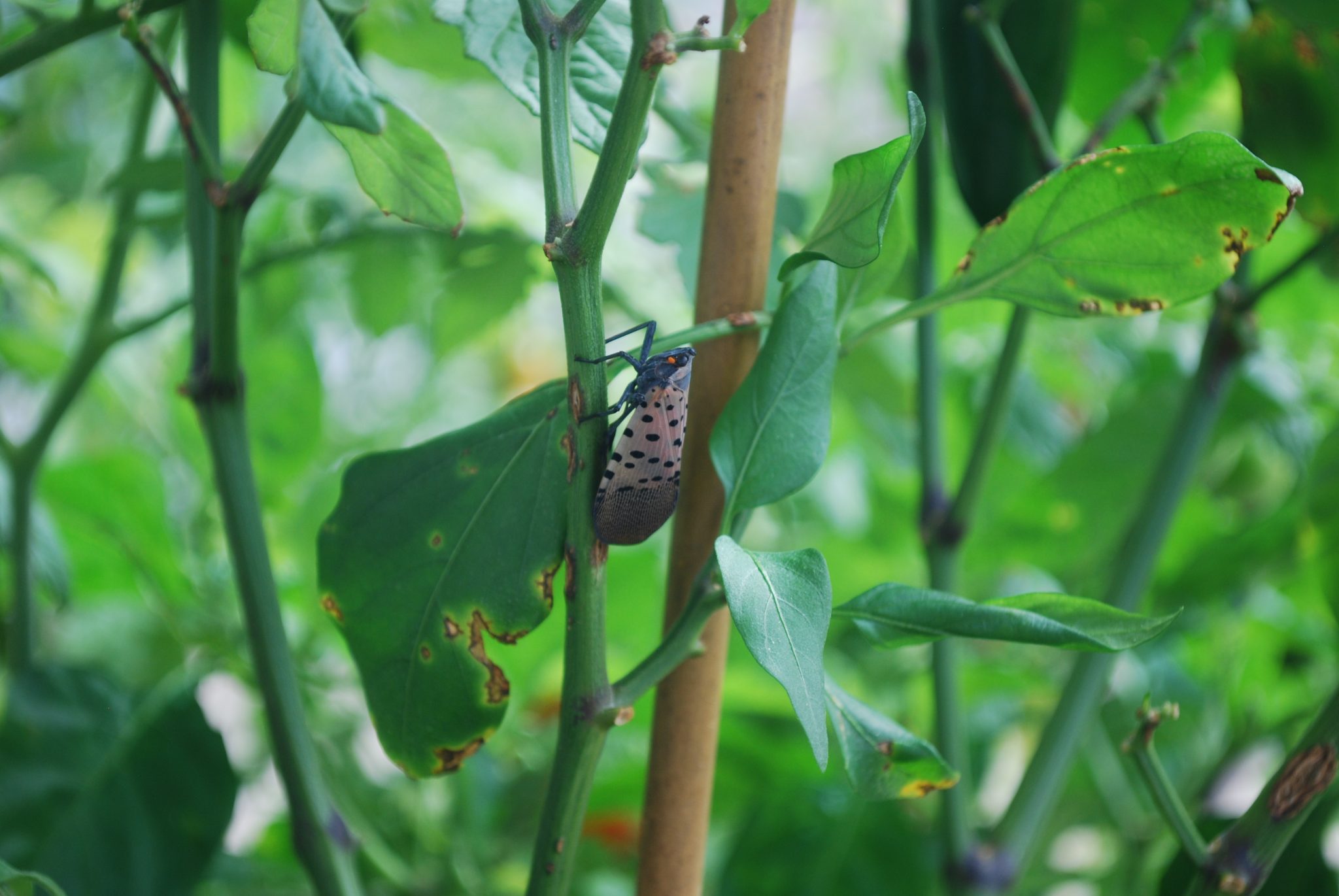 The invasive spotted lanternfly, a species native to Asia, Bangladesh and Vietnam, has made inroads into Burlington County within the last year. Experts recommend killing them on sight as they can be extremely damaging to trees and crops, too. RYAN LAWRENCE/THE SUN

By RYAN LAWRENCE
The Sun

Tony Gissi recently did some research and is pretty confident the oldest tree in the borough is the oak just outside his house.

“The circumference is 16 feet, you take that and divide by pi and then, with (a white Oak), the growth factor is five, so you multiply by five,” Gissi explained. “This tree is 300 years old. This thing has been here before Palmyra.”

But unfortunately for Gissi; his wife, Cindy Sheehan; and other residents in their neighborhood, the historic tree is under attack. In mid-July, Sheehan noticed a wet, gooey substance coming from it.

The invasive spotted lanternfly, which can cause serious damage in trees and crops, has officially arrived in town.

An insect native to China, Bangladesh and Vietnam, the insect arrived on American shores (accidentally, on a ship into New Jersey bound for Pennsylvania) about a half decade ago. Its infestation began in Berks County, Pennsylvania, and it has worked its way through that state and, within the last year, through New Jersey, too.

“It’s getting worse,” said Michael Johnson, coordinator of Rutgers Master Gardener Program of Burlington County. “It’s not a great flyer, but it’s a great hitchhiker. It started to get on the different modes of transportation from Pennsylvania.

“The hope was that Pennsylvania and New Jersey were in a position to start to stop it before it starts spreading to the states south and north,” Johnson continued. “One of the concerns in New York is that they have a lot of vineyards, because it does like grape plants. And also hops.”

So our adult beverages are under attack? Johnson chuckled.

“Right now, with the (COVID) quarantine and storms we’ve had, those have seemed to become essential,” he said.

But the ramifications of the Spotted lanternfly are no laughing matter. The bug is a major threat to the agriculture industry and could have a devastating effect on the people who work in The grapes, apples, hardwood and hops industries.

Since Burlington is the largest county in the state, the spotted lanternfly, which looks moth-like as an adult and similar to a ladybug as a juvenile, has the potential to continue running amok and ruining plant life. In addition to hops and vines, the insect can be destructive to black walnut trees and some species of both maple and oak trees, too.

When spotted lanternflies eat, they excrete a sugary substance (what Sheehan saw on her sidewalk under the 300-year-old Oak tree) that results in the growth of black mold. Although harmless to people and animals, the mold causes damage to plants.”

“We’re still taking sightings; people are calling here and we’re keeping an eye on sightings, but it’s here,” Johnson warned. “The first area that we were really seeing it was Palmyra Cove. And then it just started increasing from there. We’ve had reports in Moorestown, Marlton, Mt. Laurel, Marlton.”

So what should you do? It’s fairly simple: kill them. But be warned; that’s sometimes easier said than done.

“They’re very fast,” Johnson said. “They don’t fly that great but they’re great leapers. My mom lives in Bristol, Pennsylvania, and I’m buying a set of insect nets to try to catch as many as we can. Because if they get to the egg-laying stage, each case can have 35 to 50 eggs, and it just multiplies from there. So however you can eradicate them, please do.”

A spokesman for the New Jersey Department of Agriculture had three bullet points about the spotted lanternfly to pass along to people:

Johnson’s department at Rutgers also recommends that residents notify them of sightings (include the town, county and, if possible, a photograph) to slanternfly@njaes.rutgers.edu while farmers, nurserymen and vineyardists should report sightings to SLF-plantindustry@ag.nj.gov.

And while you may see the adult lanternfly hopping around your yard now  (they especially like the invasive plant Tree of Heaven), you want to be on the lookout for the eggs they’ll lay shortly.

“In the fall, once they start laying eggs, look for egg masses and destroy them,” Johnson advised. “They can lay eggs on trees, and once they do that, it sort of blends in, like a glaze. They’ve been known to lay them on brick and also patio furniture. You can take a harder plastic, like a thick credit card, and scrape them off, put them into a plastic bag and put alcohol in the bag and make sure it’s sealed up to dispose of them.

“The adults that are here are here,” Johnson continued. “So you try to get as many as possible. But the battle is going to be with the egg masses coming up. And it’s going to be en masse quickly. If you look at the folks in Pennsylvania, they are just inundated with them.”

Dealing with the spotted lanternfly is an all-hands-on-deck situation. Residents have to do what they can to slow the spread of the insect, even if it means recruiting kids who are looking for something to do this summer.

“We have 8- and 9-year-olds in the neighborhood.,” Sheehan said. “They would try to catch them as they got close (to the trap on the Oak tree) and they’d grab one and pull the head off. They had a great time … Another neighbor, who has a vegetable garden and was getting them all over her vegetables and blackberries, she filled a spray bottle with one cop of Epsom salts and two cups of water. It didn’t kill them, but it slowed them down tremendously where you can kill them. And it worked.”

Residents can find more information on the spotted lanternfly through the Rutgers extension in Burlington County, at (https://njaes.rutgers.edu/spotted-lanternfly/), through the state (www.nj.gov/agriculture/divisions/pi/pdf/SLFHomeownerTreatmentRecs.pdf), and on the Rutgers Master Gardners of Burlington County Facebook page (www.facebook.com/Rutgers-Master-Gardeners-of-Burlington-County-97073488689/?ref=bookmarks).