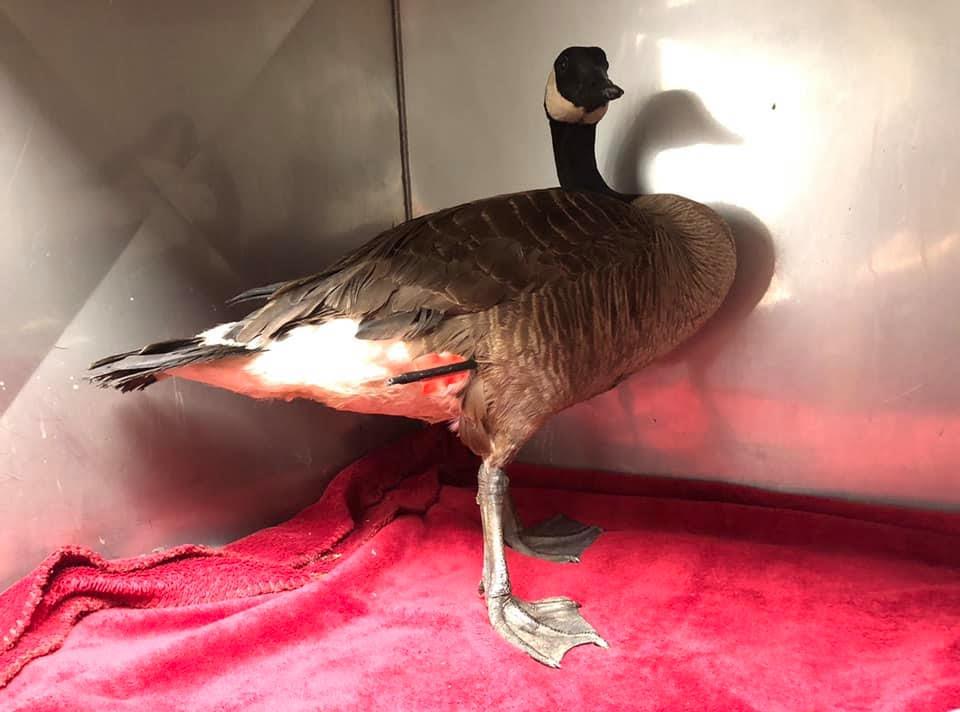 A bystander brought n injured Canada Goose to Woodford Cedar Run Wildlife Refuge around mid-August who was impaled by an arrow. Veterinarians removed the object at an animal hospital in Cherry Hill, but further evaluation needs to be done on the goose by volunteers to nurse it back to health. Staffers at Cedar Run see the injuries from time to time as people continue interacting with the wildlife, not allowing them to peacefully live.PHOTO COURTESY OF WOODFORD CEDAR RUN WILDLIFE REFUGE
×

A bystander brought n injured Canada Goose to Woodford Cedar Run Wildlife Refuge around mid-August who was impaled by an arrow. Veterinarians removed the object at an animal hospital in Cherry Hill, but further evaluation needs to be done on the goose by volunteers to nurse it back to health. Staffers at Cedar Run see the injuries from time to time as people continue interacting with the wildlife, not allowing them to peacefully live.PHOTO COURTESY OF WOODFORD CEDAR RUN WILDLIFE REFUGE

Deterrents to wildlife such as gunshots or honking horns may seem beneficial for residential and commercial property owners, but they pose a greater risk to the environment and could do more harm than good.

Lori Swanson, director of the Wildlife Hospital at Woodford Cedar Run Wildlife Refuge, explained that animals are rescued and turned in to the volunteers in all kinds of conditions after interactions with humans. A Canada Goose with an arrow shot through its skin was rescued by residents in mid-August.

But it is not always easy pinpointing where in the area an animal was either hit by a car or entangled in netting or wires.

“Judging from how the arrow was and how the skin healed around it, and you can tell from the X-rays, she has had the arrow in her for a little while,” Swanson said of the injured goose.  “Probably at least a few weeks. So, the skin had healed around the arrow. At that point, she could have traveled or flown anywhere.”

The goose underwent a successful surgery at the Animal and Bird Wildlife Hospital in Cherry Hill, but must stay at the refuge so the feathers around the wound can heal. They were plucked by surgeons for a clean operation and suturing.

She will be a resident until her feathers grow back completely and she regains waterproofing, which birds need when they go into ponds, lakes or any other body of water to avoid hypothermia, Swanson said.

Some animals deemed by humans to be nuisances can help the environment. Turkeys eat insects, seeds and ticks; geese consume vegetation around bodies of water and will eat small mammals such as mice. Smaller animals like rats eat food sought by larger predators.

An animal’s comfort with humans is apparent as people continually feed and interact with them, Swanson noted. They lose their innate ability to live independently in the wild and become dependent on people for food, shelter and care.

“Bread should never be fed to any animal, especially birds,” she cautioned. “That’s not something they would normally be eating. For birds, it can cause a few issues. We have Utley here, who is a prime example of what can happen if animals are fed an improper diet. Utley has Angel Wing, a deformity in the wing’s bones that birds can get if they’re fed an improper diet.

“Bread is not nutrient dense at all.”

People should avoid feeding and interacting with wildlife so their instincts remain intact. Some interactions with animals like geese can get intense, especially during mating season. Geese hiss at or chase people if their young are nearby or they feel threatened by someone’s presence. Anyone who comes in contact with an angry goose, should calmly walk away, Swanson advised.

The curiosity of some animals can cause unfortunate mistakes or death. Turkeys are drawn to their reflections and will approach cars to gaze at themselves. To get rid of a turkey, homeowners should bang pots and pans together to make as much noise as possible so the animal will retreat.

“Generally dogs will deter them, too, but there’s no real deterrent to put out there to keep them out of the space,” Swanson noted.

“We don’t suggest netting or liner, because we see animals coming in with a lot of entanglements as well,” she added.

Coexisting with wildlife is the optimal way to avoid injuries to geese, turkeys, raccoons and other animals that frequent yards or other areas. People have to recognize their residence may once have been the site of a habitat. If humans see an animal as a nuisance, it may see them in the same light.

“You’re never going to find a house in the woods that doesn’t have squirrels nesting in your house or cars,” Swanson stated. “There’s not a great way to completely deter them, so just go with the understanding we built on their land. This was the wildlife’s land first, and we’re coming up here to live in the woods and we should learn to coexist with them.

“Understand, there are complications.”